After the first two shipwrecks, Violet was unable to work or lead a normal life because of the shock and trauma of her experiences. 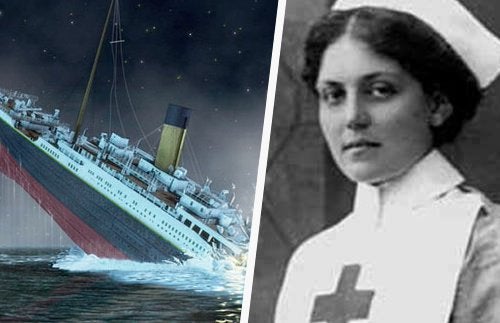 In only five years, Violet Jessop survived three tragic shipwrecks: Olympic, Titanic, and Britannic. This is the story of a young woman who, despite the challenges thrown at her, refused to set aside her natural curiosity and the inherent responsibility that came with her job.

Violet Jessop has been labeled the “The Titanic Waitress”. She was born in Argentina in 1887. Her parents were Irish and were determined to return to their native land after being unable to find gold in South America.

Read more here: 7 Keys to Resilience: Courage Comes from Within

As a child, Violet was not expected to live long. She had a short bout of tuberculosis which doctors believed would take her life. She managed to survive the often fatal disease.

Her father died shortly after arriving in England. Her mother, who suffered a debilitating injury, left young Violet with the responsibility of caring for her younger siblings. She began working to support her family at a young age. After several years, she was able to secure a prestigious position in the White Star Line.

The White Star Line had embarked on a great project in 1907. They wanted to build three oceanic titans capable of carrying 4,000 people from Europe to America.

These three “monsters of the sea” were called Olympic, Titanic, and Gigantic (later christened Britannic). You may be familiar with the names, and most certainly familiar with the way at least two of these ocean liners ended their story.

Violet Jessop was first employed on Olympic. She was a young and determined woman, who was hoping her new job would help her support her younger siblings. Most importantly, she was determined to make a respectable living, which often was the most difficult endeavor for young women in that day and age.

Her first encounter with a sunken ship was on September 20, 1911 aboard Olympic. However, it was a minor shipwreck compared to the others. Violet had been working on the ship for a few months as a waitress. Although it didn’t pay much, it provided a living for her and her family.

However, she enjoyed the environment and her work. But on that fateful day, Olympic collided with British cruiser HMS Hawke. Fortunately, no deaths were recorded, but both ships were completely destroyed.

The unfortunate accident shocked and dismayed Violet. For a time, she even considered leaving behind her work. Ultimately Jessop, with a family and career to consider, decided to stay on bolstering her strength and spirits.

Fear wasn’t an option. Nothing boosted her self-worth like being able to provide for herself and her family. When the repaired Olympic set off again on the ocean, Violet was offered a much better opportunity.

The White Star Line offered Violet a job aboard the Titanic. She would be part of a staff of 23 waitresses. Also, she’d earn more money and go down in history. This amazing ship would dazzle the world with its splendor, size, and strength.

Although she thought about turning the job down at the beginning, her family ultimately convinced her to accept it. Her job allowed her to come into contact with first-class passengers. Although she had 17-hour workdays, she made sure the socialites aboard the ship were well cared for.

However, on April 14 and 15, 1912, Titanic’s promise came to end when it collided with an iceberg and began to sink.

Violet had just enough time after the collision to go to third class and tell the non-English speakers to prepare themselves with life jackets. This way, they could evacuate the ship along with the first-class passengers she served.

Violet managed to evacuate. However, she saw how 1,523 other lives were lost as Titanic sank into the Atlantic Ocean.

Several months after the tragic accident, Violet was in shock. She was unable to work or lead a normal life. But much like the first tragedy, she mustered the strength to go on.

Pushing back the tearful memories, Violet was able to move past the tragic experience. She didn’t want the fear of sailing to be her most debilitating enemy, as she had made her living aboard ships and planned to continue with her career.

Violet was offered a position aboard the third White Star Line giant, Britannic, and accepted it. World War One had just begun, and the ship had been outfitted to serve as a floating hospital and as a transport ship for wounded soldiers.

Violet was a Red Cross nurse who helped treat wounded soldiers and the sick. On November 21, 1916, just as the Britannic was making its way into the Aegean Sea, a sea-based mine was detonated. It caused the ship enormous damage and it eventually sank.

Twenty-nine people died in the disaster. The ship was lost, but most of its passengers were able to reach lifeboats and survive until help arrived, including Violet Jessop. This was the third time of White Star Line’s giants brought Violet to the very brink of death.

Many people who experienced the same tragedy would have chosen to move on to another line of work. But for Violet, the Earth’s oceans helped her make a living. Thus, she continued to work aboard ships despite the risk and danger.

She retired in 1950 and purchased a farm and small house. She lived the rest of her life there. Violet Jessop became the woman who survived three shipwrecks, including one of the biggest maritime disasters in history.

She Beat Cancer But Couldn’t Survive School Bullying
Bethany's case shows that school bullying can be tougher than cancer and its aftermath. We need to combat bullying by focusing on the root of this problem. Read more »
Link copied!
Interesting Articles
Did you know?
New Year's Traditions Around the World