Why Does a Kick to The Testicles Hurt So Much?

A kick to the testicles isn't a common occurrence, but when it does happen, it causes disabling pain. Fortunately, this type of episode doesn't usually have serious health consequences. 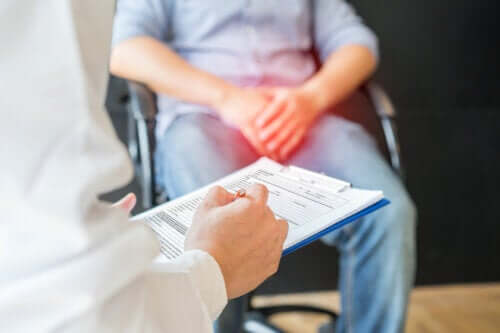 A kick in the testicles is one of those experiences no man wants to go through. A blow in that area leaves anyone doubled over in pain. Experts say that in such cases, it’s as if the body goes a little crazy.

Nevertheless, a kick to the testicles seldom has serious consequences, unless it’s too strong. This area is very sensitive, but it also has the ability to recover quickly, without complications.

However, strong trauma can have serious consequences. Therefore, it’s best to prevent this type of blow. It’s also important to know what to do in case they occur. We’ll talk about all of this in a moment.

Why does it hurt so much?

Many people wonder why a kick to the testicles hurts so much. The fundamental reason is that this small area has a much higher concentration of nerve endings than other areas of the body.

Such nerve endings converge on the vagus nerve, which is considered a “super highway” in the body. This causes pain to reach other areas and produces that sort of “temporary insanity” in the body.

At the same time, the testicles are weakly attached to the body. They’re only covered by a protective layer called the tunica albuginea and enclosed in a sac called the scrotum. Therefore, they have no cushioning and the resistance they offer to a blow is very limited.

Why does it cause pain in the abdomen?

Therefore, when a blow is received in the testicles, the pain ends up concentrating in the abdomen. Everything converges in the vagus nerve that has ramifications in that entire area and a large area of the upper part of the body.

That’s also the reason why a kick to the testicles not only produces pain in the abdomen but also nausea and vomiting may occur. Also, when the pain is very intense, there will be dizziness, tearfulness, increased blood pressure, and headache.

What are the consequences of a kick to the testicles?

A kick to the testicles can have serious consequences if it’s very powerful. If the pain doesn’t disappear within 15 to 60 minutes, the best thing to do is to go to an emergency center to be evaluated.

You may also be interested in: What Is Cryptorchidism or Undescended Testicles?

On some occasions, this type of blows cause serious consequences such as the following:

Who’s at risk of a kick to the testicles?

Injuries to the testicles, especially serious ones, are rare. However, they can occur, and therefore, appropriate measures should be taken to prevent them. Athletes are more prone to this type of problem.

In some sports, it’s more common to receive a kick or blow to the testicles. Those who play soccer, basketball, or baseball should be more careful. So should those who lift weights or do very demanding exercise routines.

Tips and prevention of a kick to the testicles

Pain is inevitable when you get kicked in the testicles. The discomfort shouldn’t last for more than an hour. In the meantime, some simple actions can be carried out to alleviate the ailment.

Most often, doctors recommend the following:

The best thing, in any case, is to prevent one of these blows and, of course, the consequences that may result from it. If a man regularly engages in intense physical activity, it’s best to take note of the following precautions:

Discover: What Do Sex Hormones Do?

When faced with pain, go to the doctor

Pain is an important symptom to watch out for. If, after a kick in the testicles, the pain is too intense or doesn’t subside with the passing of some minutes, it’s always best to go to a health center to be evaluated.

Nausea or vomiting that doesn’t subside, as well as a hematoma in the scrotum, difficulty urinating, hematuria or blood in the urine, and fever are also signs that it may be an emergency. At the same time, it’s important to be cautious with sexual practices that include testicular contact.

Physiology of the Male and Female Orgasm
During orgasm, many and very different psychological, neurological, physiological, vascular, and hormonal changes occur. Whether you're a man or a woman, changes at the physiological level will occur. Read more »
Link copied!
Interesting Articles
Anatomy and physiology
The Causes of Stained Teeth