Non-steroidal anti-inflammatory drugs or NSAIDs are one of the most widely-used drugs due to their powerful analgesic effect and the fact that you can buy them over-the-counter. 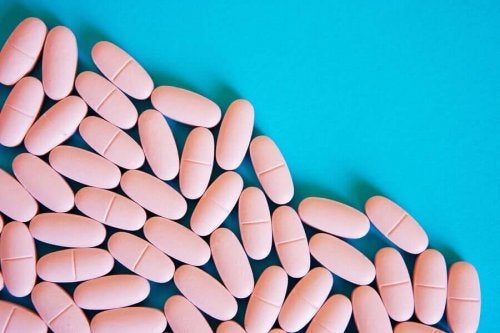 Non-steroidal anti-inflammatory drugs are known by the acronym NSAIDs. These are drugs that, due to their mechanism of action, have several applications. For example, they can induce analgesia, lower fever and inflammation, and have an antiplatelet effect.

Their use is widespread, even as self-medication. This is because they’re sold over-the-counter without medical supervision, with the potential risk of side effects.

Also, it’s important to note that no NSAID is better or safer than another. In this sense, you shouldn’t take one if you’re taking another prescription drug because the drugs can interact and cause problems.

The mechanism of action of non-steroidal anti-inflammatory drugs

Once the body absorbs non-steroidal anti-inflammatory drugs and they pass through the liver, they bind to a plasma protein called albumin.

This is important because, if the patient is hypoalbuminemic, the dose of the drug must be adjusted. This is because there’ll be more of the drug in the bloodstream that isn’t bound to proteins. Therefore, the effect will be greater.

Thus, the free drug fraction will trigger the effects of non-steroidal anti-inflammatory drugs. But how?

The mechanism of action of these drugs isn’t unique. Thus, they can trigger their effects in the following ways:

The classification of NSAIDs

Non-steroidal anti-inflammatory drugs can be classified depending on whether they inhibit COX-2 or not. Therefore, both non-selective and COX-2 selective NSAIDs exist.

Here are some of the NSAIDs that belong to the non-selective group:

Meloxicam, nimesulide, etodolac, and coxibs, such as celecoxib, are some COX-2 selective NSAIDs.

This article may interest you: The Common Classification of Painkillers

The body rapidly absorbs these drugs. The main route of administration is oral. However, they can also be administered topically, intravenously, and rectally. Once absorbed, they reach a maximum blood concentration after between two and three hours.

Moreover, experts recommend patients to take NSAIDs along with food, since these drugs can damage the intestinal mucosa.

These drugs highly bind to the plasma protein albumin (at 95-99%). This is important because this strong bind to albumin can cause interactions with other drugs that also have this characteristic.

Also, the liver metabolizes them and some of them have active metabolites. Moreover, almost all of them have some degree of enterohepatic circulation. Once metabolized, they’re excreted by the kidneys. Thus, doctors must exercise caution in patients with kidney failure and adjust the doses.

You may like this article: Meloxicam – Everything You Need to Know

All drugs can cause side effects after only one dose. Thus, it’s important to understand the risks and benefits of a drug before taking it.

The other common side effects of these drugs are:

Finally, it’s important to consult your doctor before taking any NSAIDs. Knowing its side effects and taking it as indicated is the best way to achieve therapeutic success.

The Effects of Aceclofenac
What are the effects of aceclofenac, the nonsteroidal anti-inflammatory drug (NSAID) used to treat pain caused by rheumatoid arthritis among other things. Read more »