Moebius Syndrome: What Is It?

Moebius syndrome is a rare disease clinically characterized by a lack of smiling. It's not due to a lack of happiness, but to the facial paralysis that characterizes this syndrome. 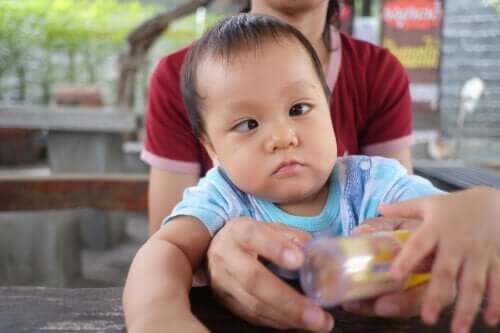 Moebius syndrome is an infrequent and rare pathology, although its incidence seems to be increasing. The latest congresses of neurology and ophthalmology in the world report an increase in the number of registered cases.

We can say that the main characteristic of Moebius syndrome is the lack of ability to smile. So, although individuals with this syndrome experience happy situations and would like to smile, they’re unable to do so.

But not only that. Sufferers with this rare disorder can’t perform many of the classic and typical facial gestures. For example, the syndrome even affects their ability to move their eyes from side to side.

This happens because two pairs of cranial nerves – pair number six and pair number seven – are partially or completely undeveloped. These nerves manage the muscles of mimicry and part of the muscles that perform some eye movements.

As we’ll see later, each pair of cranial nerves has specific functions. Nerve number six is the one that regulates the laterality of the eye. Meanwhile, number seven is what we call the “facial nerve” because it manages facial expressions.

We know that Moebius syndrome usually appears in isolation. In other words, it’s not common for a family to have more than one confirmed case. According to estimates, one in 120,000 people is born with the problem.

What are the cranial nerves?

Find out more: Here’s What Scientists Say About Sleep Paralysis

The etiology of Moebius syndrome

It’s important to clarify that, although it’s known as a syndrome, in reality, it’s not. Moebius is what we know in genetics as a sequence. In sequences, there are many malformations at the same time, originating in a single anomaly.

In the case of Moebius, the anomaly is the lack of development or total absence of nerve nuclei in cranial nerves number six and seven. Both the imaging studies performed on patients and the autopsies performed coincide in the diagnosis.

The etiology isn’t always genetic. There have been cases in which the problem of the cranial nerves is caused by medication. Misoprostol is the drug that has been most associated with the problem, as indicated by a group of researchers from the Universidad del Norte, in Barranquilla, Colombia.

This drug, in general, is used as an abortifacient. If it fails in that use, then the fetus that continues can develop Moebius syndrome.

The symptoms of Moebius syndrome

Newborns with Moebius syndrome not only lack facial expression but also often have difficulty breathing. They drool excessively and their muscle tone is weak, which can affect walking.

Added to this is the possibility that those affected may have foot deformities, which puts walking at greater risk of being delayed. Other symptoms that have been reported to be associated are:

There’s no cure for Moebius syndrome. Once it has set in, it’s not fully reversible. Facial rehabilitation sessions haven’t proven to be effective.

There’s an experimental surgical treatment that’s been initiated in Canada. It consists of an intervention where a muscle graft is performed in the facial area to allow the expression of the smile.


It’s estimated that the greatest success of the surgery is in performing it when the patient is about five years old. Although the practice is promising, it’s not available worldwide and costs are prohibitive.

One of the struggles of the families of patients with Moebius syndrome is to avoid discrimination. For this reason, they try to raise awareness among the population, emphasizing that those affected have feelings, even if they can’t express them.

Treatments continue to be under experimentation in the medical world. Surgical projections are encouraging. In the meantime, it’s essential to respect these patients and understand that their inclusion in social life depends on a greater knowledge of their condition.

Crossed Eyes: Symptoms and Treatments
It's normal for newborn children to cross their eyes occasionally. However, if it goes on beyond their first four months of age, it may be strabismus. Fortunately, early diagnosis significantly improves a crossed eyes prognosis. Read more »
Link copied!
Interesting Articles
Health
Strokes in Children