Induced Abortion: What Does It Involve? 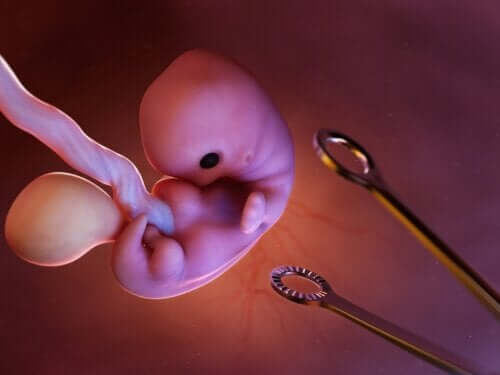 Talk of induced abortion can be shocking to many people. Whether due to ideology or religious belief, it’s a topic that tends to spark a great deal of debate among the entire population. Even within the same country, there are often regions with dissimilar legislation on the same subject.

The reasons for practicing this type of abortion vary greatly. For example, they range from personal decisions to clinical situations that put a mother’s health at risk. There are also legal stipulations to perform them in controlled sites with adequate security.

What is an induced abortion?

We refer to induced abortion as the intentional interruption of pregnancy. That is to say, it involves the decision to stop a pregnancy before the 20th week.

The 20-week limit is merely technical. Almost all accepted definitions of abortion stipulate the barrier between a viable fetus and one that isn’t. This means that, in the case of premature birth, the chances of survival are greater if the pregnancy is halfway through.

This goes beyond the legislation on the subject. Some states allow induced abortion until the 20th week, others until the 12th or 8th week. Whatever the case, this variability doesn’t affect the concept of the procedure.

If the termination of the pregnancy takes place after the pregnancy is halfway through, there is no abortion. Usually, these circumstances occur with mothers who suffer from diseases that make it unviable to continue the process. For example, in cases of maternal pulmonary hypertension.

Based on the length of the pregnancy, induced abortion can involve different types of techniques. This is determined to ensure minimal complications to the woman and reduce the risks of subsequent infection or bleeding.

Induced abortion is the termination of pregnancy by one’s own choice or due to a clinical emergency.

Read on: Types of Abortions You Should Know

The approved techniques in the countries where induced abortion is legal are divided according to the weeks in which they are applicable. Thus, we have options for the first trimester and the second trimester.

Techniques for the first trimester

During the first trimester of pregnancy–up to the 14th week of pregnancy–the options are combined misoprostol and vacuum aspiration. As we will discuss below, doctors recommend some methods over others.

Misoprostol is a drug with long-known abortifacient properties. Its sale is regulated in almost all countries, limiting its use to legal issues. The effect it produces is an increase in uterine contractions.

One way to perform the induced abortion with the drug is to combine it with methotrexate. This drug has the property of inhibiting cell replication. Together, these drugs stop fetal growth and propel the contents of the uterus outward.

In clinics, instead of methotrexate, professionals combine misoprostol with mifepristone to speed up the process. However, the maximum prescription time is up to 10 weeks of gestation. In general, within the next 6 hours of receiving these medications, the abortion occurs. However, some women take longer, up to 48 hours.

The third option is aspiration, which experts don’t recommend beyond the 16th week of pregnancy. It consists of suctioning the fetus and the placenta out through the vagina with a special device.

Due to the form of the procedure, there is some posterior pain and discomfort for the woman. Also, bleeding occurs from the micro-trauma of the aspiration. In any case, it takes one day and, after a brief period of observation, the woman can return home.

Induced abortion in the second trimester

As the fetus has grown in the second quarter, the situation is more complex to carry out from a medical aspect. There are two options: Dilation and induction.

In reality, dilation involves a combination of techniques to perform the induced abortion. Professionals use instruments to dilate the uterus, then create a vacuum with suction (as in aspiration), and finally, they scrape the internal area of the organ.

Recovery is usually immediate and it’s common for the woman to be discharged the same day to return home. However, because of the type of approach, women need to practice certain precautions during the month following dilation.

Regarding induction, the technique involves stimulating a sort of labor. For this reason, professionals use this technique only for very advanced cases between the 15th and 20th week of gestation.

Specialists administer medications to provoke contractions and the pains are similar to those of childbirth. If necessary, if the expulsion does not take place, the medical team resorts to aspiration or dilation. In doing so, they make not to leave any remains inside the uterus that could lead to complications later on.

Induced abortion is not legal in all countries. It remains a controversial issue around the world today.

Find out more: Abortifacient Plants You Shouldn’t Eat While Pregnant

It’s worth noting that these procedures for induced abortion are legal in some countries, while in others they’re not. There are many differences between laws in one region of the world and another, so not everything applies equally in terms of legality.

The performance of any technique of this type must respect medical standards so as not to compromise the life of the patient. Therefore, authorized clinics must have the appropriate services and tools for this purpose.

What Causes Abdominal Pain in Pregnancy?
Abdominal pain in pregnancy doesn’t have to be a sign of a serious illness. In fact, simple causes can lead to such discomfort. Find out more here! Read more »
Link copied!
Interesting Articles
Treatments
Myths about Breast Surgery