Thirteen Things that Could Cause Premature Birth

Would you like to know what are the possible causes that would cause a premature birth? Find out everything you need to know in this article. 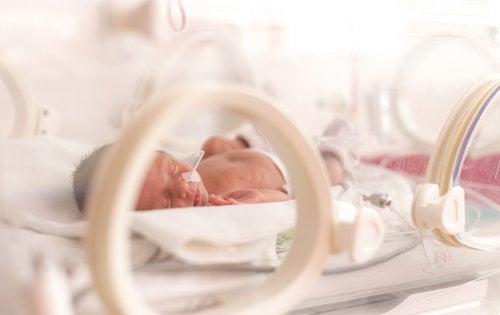 All pregnant women hope that they’ll be able to carry their baby to term. In fact, premature birth is one of the main fears of any future parent. In today’s article, we’ll tell you what factors can lead to early labor and what symptoms indicate your child could come into the world sooner than you expect.

Premature birth – what you should know

Preterm birth is one that occurs prematurely, specifically after week 21 and before week 37 of gestation. According to medical lingo, babies who come into the world between weeks 37 and 40 are “full term.”

According to data, those born before the 28th week have a 65% chance of survival, while those who exceed it have a survival rate of 95%. But the question remains, what causes premature birth?

Factors that can cause a premature birth

The possible causes of preterm labor are many and it’s difficult to discuss them without evaluating every specific case. In general, the main factors that can cause premature labor are:

Gestational diabetes is a risk factor that could lead to preterm birth. However, there’s no conclusive information that ensures suffering from this condition would increase the risk of a baby being born early.

A mother’s serious health conditions can affect the normal course of her pregnancy. Kidney or heart disease in a pregnant woman could lead to premature birth.

The thyroid hormone is important in the development and growth of a baby, especially at the beginning of pregnancy. In addition, it’s vital for placental development. A study by the American Thyroid Association concluded that changes in thyroid function throughout pregnancy may be associated with preterm labor.

Preeclampsia happens when there’s a lack of oxygen in the placenta. This condition can seriously affect the course of a pregnancy, leading to preterm birth and even serious damage to the baby’s health. At the same time, eclampsia could result in a series of seizures that could lead to a coma.

You may be interested: Risk Factors of Perinatal Asphyxia

Placental abruption is a rare situation in a pregnancy. It happens when the placenta separates from the wall of the uterus. Similarly, placenta previa refers to a bad location. In the latter case, the placenta is usually located in the cervix. Both conditions are factors that can lead to premature birth.

Urinary tract infections, as well as vaginal infections, are associated with a greater possibility of having a preterm birth. In various studies, researchers observed that inflammatory processes could induce labor or cause a premature rupture of the membranes.

Exposure to toxic substances will put the pregnancy at risk, especially when associated with certain behavior such as poor diet, poor prenatal control, and the possibility of transmission of sexually transmitted or viral diseases.

Specialists in a Québécois study found that women who gave birth before completing their term had evidence of higher average stress between the 10th and 20th week than the pregnant women who carried their baby to term.

However, the various studies that analyzed the relationship between premature birth and stress didn’t attain conclusive data. These researchers argue there seems to be a direct relationship. However, they need to conduct further research.

9. Depression can lead to premature birth

Some doctors claim that cases of preterm birth that have no explanation may be related to depression during pregnancy. When this happens, it overstimulates the stress hormone (cortisol), as well as corticotropin. This combination could induce labor.

When the pregnancy involves two or more babies, the extra weight in the uterus can rupture the amniotic sac and lead to early contractions.

High blood pressure during pregnancy can complicate a pregnancy, increasing the risk of preeclampsia, and triggering preterm birth. For this reason, specialists often closely monitor pregnant women with hypertension history.

12. Age is a factor in premature birth

Pregnant teens are at increased risk of giving birth prematurely because they may not be fully developed themselves. In the case of pregnant women over 35, the risk also increases because other conditions such as diabetes or hypertension are more common.

13. A short interval between pregnancies

Go to the hospital as soon as possible if you think you’re about to give birth and haven’t completed the term. This is a medical emergency that requires immediate attention. Symptoms that can alert you to the beginning of labor are:

Finally, don’t hesitate to consult your obstetrician if you have any doubts about it. They should be able to answer your questions and reassure you based on your physical condition.

How Long Should a Premature Baby Stay in the Hospital?
A newborn must spend some time in the hospital until they’re in good health. But do you know what influences the hospital stay of a premature baby? Read more »
Link copied!
Interesting Articles
Pregnancy
How to Recognize Postpartum Depression and Treat it