Did you know that some medicinal plants could cause a miscarriage? Discover everything here. 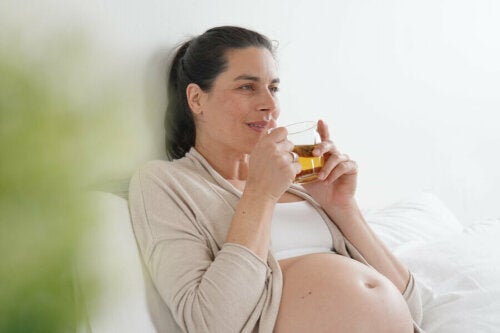 Did you know that there are some plants that you shouldn’t eat while pregnant? Usually, they’re known as abortifacient plants, since they can cause serious damage to your child’s health, even triggering a miscarriage. We’ll tell you everything you need to know in this article.

Abortifacient plants to avoid during pregnancy

Plants known as abortifacient have within their compounds some active ingredients that can favor the onset of contractions, thus triggering an abortion, especially during the first months of pregnancy.

For this reason, pregnant women shouldn’t usually take medicinal plants, unless they have a prescription and medical advice. Before consuming natural teas, consult your doctor about it.

Find out: What Can Cause Discharge During Pregnancy and How To Treat It

Take note of the plants that could cause health problems for your baby and even yourself so you can avoid them during pregnancy. Below, we’ll tell you which abortifacient plants you should avoid eating:

Regular consumption of infusions made with these plants can cause some complications, especially during the first trimester of pregnancy, although we also don’t recommend consumption in the second and third trimesters. Among the possible problems we have:

As we mentioned at the beginning of this article, consult your doctor before ingesting any of these medicinal plants. Remember that, during pregnancy, you have to pay special attention to your diet to take care of your health and your baby’s.

Drinking teas with abortifacient plants and risk of miscarriage

Many women drink tea made from any of the plants mentioned above in an attempt to minimize caffeine intake, which we know shouldn’t exceed 300 mg daily. Remember that caffeine is also present in tea, some soft drinks, and chocolate.

Now, does this information mean that if you’ve had wormwood tea you have a high risk of a miscarriage? As a general rule, the risk of miscarriage increases with regular and habitual consumption. This means that if you drank tea from one of these abortifacient plants before knowing that they could be harmful, there’s no danger.

When in doubt, we recommend that you go to your doctor to get their opinion and remain calm, for your health and that of your baby. No one can guide you better than a specialist.

We’ve already seen which teas aren’t recommended during pregnancy, now we’ll give you some options to replace coffee or black tea for breakfast:

Note: Although these infusions don’t usually cause problems in pregnant women, before drinking them, you should consult your doctor.

If you’re pregnant, you have to be especially careful with your diet and hydration. Pay attention to everything you eat to avoid damaging your health or that of your baby.

Diet
What Are Pseudocereals and What Are the Benefits?

Pseudocereals are plants that people have been cultivating for years. This grain is actually a flower seed. Wheras typical cereals and…

Medication
Benefits and Side Effects of Isotretinoin for Acne

Illnesses
All About Ramsay Hunt Syndrome

Ramsay Hunt syndrome is caused by the same virus that causes chickenpox. It causes symptoms and signs that appear because…