Loss of Vision: Causes and Symptoms

Sudden vision loss is a major problem that shouldn't be ignored under any circumstances. Here are some of the most common causes and symptoms. 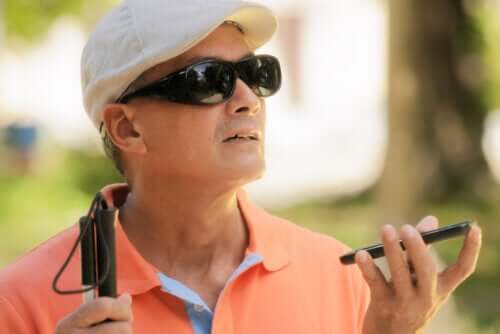 There’s no doubt about it, sight is one of the senses we most rely on. Therefore, vision loss represents a serious problem that dramatically changes your life. Do you want to discover the causes and symptoms of this problem? Keep reading as we explain it all!

First of all, for there to be a decrease in visual acuity, at least one of the means involved in vision must be affected. In this sense, partial or total blindness will occur when there’s a problem with the cornea, the crystalline lens, the retina, or the optical nerve.

Causes of partial loss of vision

When we talk about partial blindness, we’re talking about those people who, despite having considerably diminished their visual acuity, are still able to distinguish certain shapes, lights and shadows. Therefore, there isn’t a complete loss of sense, but the individuals can no longer rely on their vision as most people do.

Depending on its cause, this type of blindness can be chronic or acute. Let’s see the most frequent causes of the partial vision loss.

Any injury caused on the surface of a tissue will generate a scar and the cornea is no exception. This scar eliminates the transparency of the cornea, which prevents light from reaching the retina. This produces a major decrease in visual acuity.

Injuries to the cornea can have a variety of reasons, from severe infections to direct trauma. Any stimulus that can damage the cells of the cornea to a considerable depth will be able to generate partial blindness.

The affected visual field will vary according to the location and size of the scar. In this sense, there’s no specific pattern of presentation. However, the following symptoms may occur:

Another of the most common causes of partial blindness is cataracts. These are opacities in the lens, which is the main means of refraction of the eye. This opacity prevents light from correctly reaching the retina, thus generating a partial loss of vision.

In most cases they appear due to degeneration of the crystalline lens or due to some lesion in the same. According to various studies, cataracts represent the cause of 47.9% of blindness in older adults.

Among the main symptoms reported by people with cataracts are blurred, opaque or cloudy vision, faded colors and the inability to see well at night. They can also be lights that look very bright or have a halo around them, as well as double vision.

The retina is the part of the eye in charge of translating light signals directed by the crystalline lens for the brain to process. So, naturally, any injury to it can generate loss of vision.

On the other hand, there’s another type of lesion in the retina that isn’t related to the presence of fluids. An example of this is macular degeneration, in which the center of the retina begins to deteriorate, generating blurred vision or a blind spot in the visual field.

Lastly, several infections by fungi, parasites or bacteria can severely injure it. Such is the case of ocular toxoplasmosis, very common in immunosuppressed people.

Problems with the optic nerve

The optic nerve is in charge of transmitting all the information captured by the retina to the brain. Therefore, it’s also a crucial part of our body’s ability to see. Problems related to this structure usually affect one or several visual fields.

In most cases, they’re produced by glaucoma. This is a common disease that generates an increase in intraocular pressure that affects the nerve. In this sense, it’s unable to transmit the signals properly, making it difficult to see.

However, there’s another series of conditions that can generate partial blindness affecting the optic nerve, such is the case of optic neuritis or inflammation of the nerve. In addition, indirect effects of cerebral vascular events (CVE) or tumors in the central nervous system also affect our sight.

It’s important to clarify that the symptoms of optic nerve injuries can vary depending on their etiology. However, people usually present a rapid loss of vision, reddish saturation in one or more visual fields, double vision and eye pain.

Causes of complete loss of vision

On the other hand, some people could also suffer from total blindness. This occurs when a person is unable to distinguish either light or shadow. The situations that can cause total vision loss can be the same ones that cause partial blindness; nevertheless, at this point they’re in their terminal stage.

When the trauma is very serious and affects the whole of the cornea, the individual may experience complete vision loss. One of the most frequent causes of this type of injury is chemical burns.

However, not only corneal injuries are capable of affecting visual acuity. A head or eyeball injury, whether penetrating or blunt, can damage the optic nerve and the retina.

Complete detachment of the retina

We’ve mentioned the partial detachment of the retina as a cause of partial blindness. However, if it’s not treated in time, it can progress and become a total detachment, which would prevent any type of vision whatsoever.

In most cases, it occurs due to the presence of liquid in the back part of the retina. This separates the tissue of the eyeball, interrupting the blood supply, which can cause ischemia and the death of the area.

Although it may be asymptomatic and painless at first, some people may experience the following symptoms:

Diabetic retinopathy is one of the complications of diabetes mellitus. It affects the capillaries of the retina which filter fluid into the retina and promote substance deposit. In addition, it may block some healthy blood vessels.

In the initial stages of the disease, partial blindness may occur. However, if nothing is done to stop it from progressing, it causes complete vision loss. This is because in the last stage, new blood vessels with very thin walls are generated to try to properly irrigate the tissue. These new capillaries are prone to break spontaneously and generate a retinal hemorrhage.

A rare cause of vision loss is endophthalmitis. This is an infection inside the eye and should always be considered a medical emergency.

External microorganisms may enter the eye after eye surgery or injury and cause this infection. However, it can also be caused by an internal septic infection that has affected the eye.

Symptoms for people with endophthalmitis include severe eye pain with redness of the eyes and the appearance of a yellow, white or purulent discharge inside the eyeball. The eyelids also become inflamed.

Discover: What Are the Causes of Watery Eyes?

All blood vessels in the body are prone to blockage. When blockages occur in the blood vessels of the retina or the optic nerve, the individual experiences a painless loss of vision.

If the affected blood vessel is the central artery of the retina or the artery of the optic nerve, there’ll be an inadequate blood supply to the tissue. This will result in an insufficient supply of oxygen, which could cause it to inflate and become permanently damaged.

On the other hand, when it affects the central vein of the retina, there won’t be adequate blood drainage. This will cause waterlogging, that is, an excessive accumulation of liquids in the tissue, which will lead to blindness.

When to see a doctor for loss of vision?

Vision loss, whether total or partial, should always be considered a medical emergency. On many occasions, it may be painless and seem temporary. However, the pain doesn’t indicate that it’s less serious and, therefore, it should never be ignored.

For this reason, it’s key to go to a specialist as soon as possible so that they can perform the pertinent tests and reach an accurate diagnosis. Many of the causes only give a short period of time before the damage is irreversible.

It’s important to clarify that when the loss of vision cannot be reversed, a change in lifestyle is required. Fortunately, today there are many ways in which visually impaired people can perform their daily activities without any inconvenience.