As of yet, the causes for the development of this disease are unknown. Some researchers believe that babies are born with it. Others believe that it's caused by exposure to toxic or infectious substances. Read on to learn all about biliary atresia. 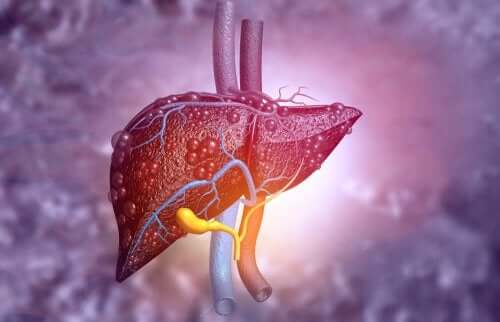 Biliary atresia is a chronic and progressive liver disease that becomes evident shortly after birth.

These bile ducts are blocked in people who suffer from biliary atresia, meaning that the bile can’t leave the liver. Thus, this organ becomes damaged, affecting many vital bodily functions.

Biliary atresia is the most common cause of liver transplants in children living in the United States. It occurs once every 18,000 births. Plus, it’s slightly more common in women than in men. Also, people with Asian or African American descent and premature babies suffer more from this disease compared to Caucasian babies.

As of yet, the causes for the development of this disease are unknown. Some researchers believe that babies are born with it, meaning that it manifests during pregnancy when the liver is developing.

Other experts claim that the disease manifests after birth, possibly by exposure to toxic or infectious substances.

In principle, it’s believed that biliary atresia isn’t associated with drugs that the mother took, illnesses she’s had, or anything that she did during pregnancy.

Plus, it’s also currently unknown whether a genetic component is behind the development of the disease. However, it’s unlikely for the disease to recur more than once in a family.

The symptoms of biliary atresia

Although newborns who suffer from this condition may seem normal at birth, jaundice (yellowing of the skin and mucous membranes) manifests in the second or third week of life.

The baby may gain weight normally during the first month. After that time, the baby will lose weight, they’ll become more irritable, and their jaundice will worsen. Also, they can develop other symptoms such as:

You may also want to read: Pale or White Stool: Causes and Treatment

The therapeutic management of biliary atresia is very controversial since 80-85% of those who suffer from the disease will end up undergoing a transplant. Also, as we already mentioned above, it’s an irreversible disease. No drugs can unlock the bile ducts or foster the development of new bile ducts.

Kasai portoenterostomy is more effective if performed before the baby is three months old. Also, it allows the baby to grow normally and have relatively good health for many years. However, it’s important to note that cholestasis may manifest, which is an accumulation of bile in the liver that can cause liver damage.

Read on: Everything You Need to Know About Liver Detox Diets

After surgery, the baby’s health often improves quickly. However, they’ll need drugs to prevent the body from rejecting the new organ. This rejection is a normal protective mechanism that tries to defend the body from viruses, tumors, and other foreign substances.

Improve Your Liver Health with a Simple Remedy: Boldo
Thanks to its properties, boldo can help improve liver health and reduce inflammation. It's essential to accompany its intake with a balanced diet. Read more »
Link copied!
Interesting Articles
Illnesses
Everything You Should Know about Hypochondriasis