What's the Purpose of a CT Scan?

Computed tomography (CT) is a quick, simple, and painless diagnostic imaging test. Who needs one? What are its advantages? Today's article will tell you more about it. 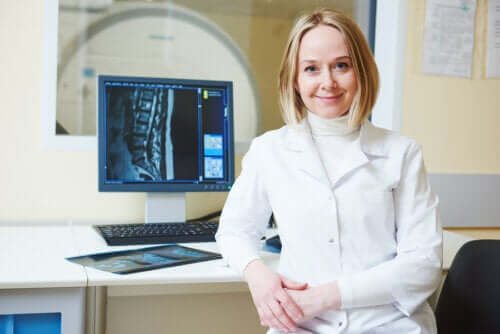 A CT scan is a radiological imaging test used in the diagnosis of many diseases. This article contains some interesting facts about this type of analysis.

Computed axial tomography is a diagnostic imaging test. It’s an X-ray apparatus that emits many rays from different directions, instead of only one beam as occurs in a conventional X-ray.

Furthermore, these beams form many different images and a computer obtains and processes them. They then generate a reconstruction by planes of the part of the body under study or of the interior of the entire body, depending on the case.

The computer can even configure the images in such a way that it can reproduce a 3D image of the inside of the body. Thus, the images one can obtain with a CT scan are much more detailed than those obtained with a conventional X-ray machine.

What does CT scan show?

The images of the different internal tissues obtained with this imaging test are based on the different absorption of radiation by the tissues. Thus, different tissues, such as bones, tendons, soft tissues, nerve tissue of the brain, etc., appear in different colors.

For example, bones appear whiter while areas in which there’s air, such as the lung, appear blacker. Furthermore, areas with an intermediate density, such as the heart or liver, are gray.

What’s a CT scan for?

This quick test is for evaluating the state of many internal parts in emergencies. Some of these may be after traffic accidents, in the event of a suspected stroke or ictus, etcetera.

It’s also one of the main tests in the diagnosis and evaluation of different types of tumors. Some of the most common ones are lung, ovarian, or liver tumors.

Moreover, one can use different contrasts in the performance of the test which will help generate more detailed images of certain parts.

The CT scan is a quick, simple and painless test. In preparation for it, the doctor will ask the patient who’s undergoing the test about possible allergies and any prostheses they might have, among others. The patient will have to remove metallic objects, hearing aids, and any other objects that may interfere with the test.

Then, they’ll be placed in a specific position that’ll facilitate the obtention of the desired image. The patient will be lying on a couch that’ll slide them in and out of the X-ray machine in that position.

The test usually takes less than 30 minutes and may even be faster with certain modern equipment and in children.

Is a CT scan safe?

The riskiest part of the CT scan is radiation exposure. However, the amount of radiation to which the patients are exposed is safe. As with everything, there’s always a slight chance of developing some type of tumor from the radiation.

The benefit from the test is always much greater than the risk of developing cancer. However, this isn’t true for pregnant women. In fact, they should always discuss it with their physician as soon as they propose a CT scan.

In general, this test isn’t recommended for pregnant women and will only be done if the benefits outweigh the risks.

Find out the reason why Hydration is Essential for Your Brain

You now know that a CT scan is a quick, simple, and painless test that can provide a lot of important information in the diagnosis of multiple diseases or the case of emergencies.

Finally, its use is becoming more widespread and the technique for interpreting the results more refined as time goes by.

Parts of the Brain and Their Functions
The parts of the brain and its functions have gradually become known and deciphered, but there are still many enigmas surrounding them. Read more »
Link copied!
Interesting Articles
Treatments
Advantages and Disadvantages of LASIK Surgery