The Nutritional Properties of Sorghum and How to Use It

Today, you'll discover the nutritional properties of sorghum, a gluten-free grain you can include in your recipes. Learn all about it in this article! 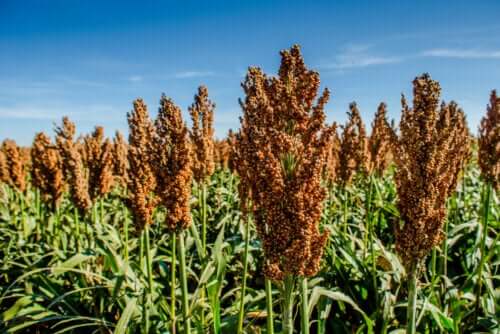 Today, we want to tell you about the nutritional properties of sorghum, which is similar to many other gains in that sense. We’ll also tell you how to can use it in the kitchen.

Sorghum is a grain that’s suitable for direct human consumption or the production of alcoholic beverages. It’s also popular as livestock feed, as it has a high nutritional density.

It’s important to note that sorghum is rare in most Western countries when it comes to human diets. However, you can use it to your advantage, as it’s a foodstuff with a high content of complex carbohydrates and fiber.

The nutritional properties of sorghum

From an energetic point of view, it provides 329 kilocalories and the presence of proteins amounts to 10.6 grams. Fats are less significant since it only contains 3.4 grams of lipids per 3.5 ounces.

Among the micronutrients, vitamin B3 stands out with 3.7 milligrams and vitamin B9 with 20 milligrams. It only has 2 milligrams of sodium, so it’s suitable for people with hypertension problems. It’s also possible to find in its interior minerals such as calcium, iron, potassium, and phosphorus.

You may also be interested in: The Risks of a Vitamin Deficiency

The benefits of sorghum

Thanks to the nutritional properties of sorghum, it’s beneficial to the body. We’ll tell you about those benefits and the position of science in this regard.

The properties of sorghum: Reduced risk of constipation

Fiber has proven to be a key nutrient for maintaining digestive health. Fiber reduces the risk of constipation by increasing the size of the fecal bolus and the motility of the intestine, promoting the speed of transit.

This is produced by stimulation of the mechanoreceptors located in the walls of the digestive tract, which send a nerve signal that triggers more intense peristaltic movements.

High sodium intake is negative for maintaining adequate blood pressure levels. However, the properties of potassium to exert the opposite function are interesting in terms of compensation.

According to research published in the International Journal of Cardiology, this mineral is actually a blood pressure reducer. The good news is that sorghum contains significant concentrations of potassium. For this reason, it may be a good idea to include it in the menu of those with heart disease.

To know more: Foods that Provide The Most Potassium

Calcium is one of the elements that determine bone density. There’s evidence that its assimilation at an intestinal level is much greater when vitamin D levels are adequate.

In any case, a correct intake of the mineral in the diet significantly reduces the risk of developing osteoporosis. Sorghum contains calcium in its interior, so the presence of this grain in the diet is considered positive for bone health.

The contraindications of sorghum

Sorghum contains a substance, hydrocyanic acid, which could cause health problems if consumed in excess. To avoid problems, you should avoid eating the leaves and stalk, as these are where the highest concentration of the toxic substance is found.

It’s also a good idea to cook it for 45 minutes to inactivate the residual substance. Otherwise, problems such as headaches may occur.

Likewise, you should take into account that there are people who have developed an allergy to this food. In this case, you should exclude it from your diet, due to the reaction that it produces, which could lead to serious conditions, such as shock.

How can sorghum be used in cooking?

Sorghum is used in cooking like any other grain. The best way is to cook it with water, as we have already mentioned, for at least 45-60 minutes over medium heat.

From here,  you can prepare it as an accompaniment to meat, as an addition to a sauce, or even as part of a salad. It’s important not to exceed the cooking time so that it’s not left with a chewing gum-like texture, which could be unpleasant.

Sorghum is a gluten-free alternative

Sorghum is a grain that can fulfill the function of many grains that are part of your regular diet.

It has the advantage of not containing gluten in its composition, so it’s suitable for celiac and intolerant people. However, certain precautions must be taken when cooking it to avoid its toxicity.

It’s an excellent option to complete your fiber intake, guaranteeing also the intake of complex carbohydrates of low glycemic value. It combines well with sauces and is a fantastic garnish.

So, now that you know the nutritional properties of sorghum, what are you waiting for? Give it a try!

Why You Should Eat Quinoa
Do you know why you should eat quinoa? is a seed also known as “mother of all grains”. It’s a plant from the family of beets and spinach. It contains different nutrients in both the seeds and the leaves. Read more »
Link copied!
Interesting Articles
Nutrition
Nutritional Information and Health Benefits of Peas

Nutrition
Six Tips to Eat Less and Not Be Hungry

In today's article, we'll tell you how to eat less and not go hungry. This is because that calorie-ridden snack…