Why Are There Ridges on My Nails and How Do I Get Rid of Them?

While they are often caused by injuries or malnutrition, the appearance of ridges on your fingernails can be a sign of a more serious underlying issue. 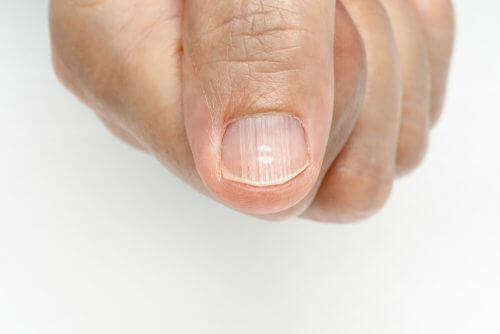 Everybody wants to have strong, beautiful nails that don’t break easily. Sometimes, however, marks and ridges can appear, which not only spoil the appearance of your nails, but may also indicate a biological imbalance in the body.

However, in the majority of cases, changes in our nails are caused by everyday wear and tear. In this article, you’ll discover the meaning behind the ridges on your nails, and how to eliminate them naturally.

White horizontal ridges on your fingernails can have many different causes. The most common causes of fingernail ridges are:

Serious illnesses that cause high fever

Common infections such as a cold or flu (which also cause a high fever) can cause horizontal ridges to appear on the nails months later.

In the case of conditions such as pneumonia or scarlet fever, you may notice that several nails develop ridges at the same time. This is because the body has prioritized fighting the infection over normal nail growth.

In this case, no treatment is necessary, as the ridges will disappear once the body is fully recovered.

This skin disorder affects many different parts of the body, causing scaling and inflammation. It may also affect the fingernails, causing horizontal ridges to appear.

Those who suffer from psoriasis often live with a great deal of discomfort. In some cases, the pain and itching can be unbearable.

Although, in theory, psoriasis has no cure, many people have found that eating a balanced and healthy diet can help to significantly improve their condition.

We would recommend including fresh, natural foods in your diet, while reducing your intake of foods that are high in refined ingredients and “bad” fats.

Ridges on the nails can be caused by poor circulation in the legs. Symptoms may include feelings of pressure or heaviness in the legs, which can last for several hours, or the appearance of varicose veins.

Changes in the nails which occur as a result of poor circulation may indicate that there is insufficient blood-flow to the feet. In this case, it’s important to consult with your doctor.

Some ways you can improve your circulation include:

Zinc is a mineral which is essential for many of the body’s functions. It’s also needed for strong, healthy nails.

Zinc deficiency can cause the appearance of marks or horizontal ridges on the nails. If medical tests reveal a zinc deficiency, we would recommend increasing your intake of zinc to confirm that it is indeed the cause of the abnormal nail growth.

Zinc can be taken in supplement form, or it can be consumed in the following foods:

The most common explanation for the appearance of vertical fingernail ridges is aging. However, by consuming a diet rich in antioxidants, we can delay the deterioration caused by free radicals, both internally and externally.

These are some foods that contain the highest levels of antioxidants:

In some cases, the appearance of fingernail ridges can be related to a vitamin B deficiency, also known as pernicious anemia.

It’s important to establish the underlying cause of the vitamin deficiency. It can be the result of a strict vegan diet (which can be improved with supplements) or it may be caused by a more serious condition, which is preventing the intestine from absorbing enough nutrients.

The following foods are good sources of Vitamin B12:

A lack of magnesium in the diet can also cause ridges on the fingernails. Some magnesium rich foods include:

In some cases, you may need to take magnesium supplements. The most common supplements are chloride (excellent for fighting constipation) and citrates (more suitable for those who suffer from heartburn).

In conclusion, our nails are a good indicator of our general state of health. Simple changes in appearance can help us to detect more serious health conditions. Avoiding injuries and leading a healthy lifestyle can help to prevent ridges or marks on your nails. If you have any doubts, it’s always best to consult with a medical professional.

Interesting Articles
Illnesses
Benign Tumors: Everything You Need to Know

Diet
Can Hair Fall Out Because of the Keto Diet?

The question has arisen as to whether hair can fall out when people are following the keto diet. This form…