When Do Men and Woman Stop Growing?

When do men and women stop growing? This question is more common than we think and is often very relevant for parents. Learn the answer here! 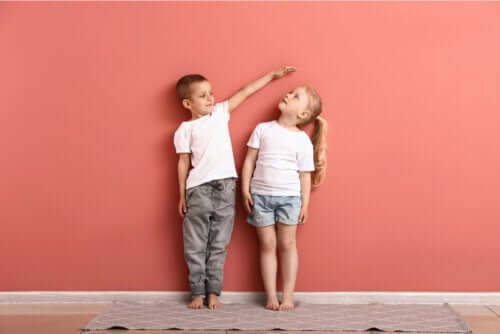 It’s often common for parents to ask their children’s pediatrician when men and women stop growing. The subject has given rise to multiple studies from perspectives that not only include genes, but also variables such as geographic and socioeconomic aspects.

One of the patterns that-s being established in these investigations is that gender has an influence. In general, girls develop earlier than boys. As early as 8 years of age, there may already be hormonal variants that don’t appear in boys until around 10 years of age.

With this difference of approximately two years, the changes in the process of becoming adults will continue to take place. For this reason, during adolescence, there’s a moment in schooling when this margin becomes very evident among classmates.

They return to a new school year in which it seems that only the girls have grown up and their bodies have been distributed differently. Their hips are more accentuated and their breasts are more noticeable. Often, a year later, it will be the boys who return with strengthened musculature and are taller than the girls.

Why do we grow?

Human beings grow as part of our evolution and development. It is a physiological process that occurs gradually as we lengthen our bones, gain weight, and reach maturity.

The most notable growth spurts occur in the first year of life, between the ages of 5 and 7, and then in adolescence. This is known as the pubertal growth spurt and constitutes the last moment of rapid growth in men and women. According to the World Health Organization (WHO), it lasts from 10 to 19 years of age.

This stage is accompanied by other emotional and physical changes. Parallel to the accelerated growth of the bones is the growth of the larynx; this causes the voice to become more intense and deep. On the other hand, the muscles are more defined, hair grows on the genitals, face, and other parts of the body.

In the case of women, the onset of menstruation seems to mark a rhythm that gradually slows growth. From then on, they add between 1 and 2 inches.

At this time, they grow in height. And though not all reach their definitive health, they at least come very close to the maximum that they’ll have. According to the average, then, women stop growing at about 14 or 16 years of age, while men stop growing around the time they’re between 16 and 18.

For men, this range extends. Some continue to grow, albeit very slightly, until the age of 21. And always in a much slower way than at puberty. The development of muscle mass continues until about 24 years of age.

You may be interested in: Strategies to Promote Healthy Habits in Teens

What are the factors that influence when we stop growing?

Growth in both men and women is highly dependent on genetics. However, other factors also play a role as well.

The height that human beings achieve also has to do with the quality of their diet and sleep. A healthy and balanced diet will provide the vitamins and minerals necessary for the proper development of bones and muscles.

But how does sleep influence growth? When we sleep, the body produces hormones, including the growth hormone somatotropin. This is one more reason why we should try to create the right habit of a good night’s rest, according to the number of hours required for their age.

Other thyroid-related hormones have a direct influence on bone development. Hence hypothyroidism, sometimes innate, is linked to growth problems in children. A healthy person will grow from the moment he or she was conceived.

We notice this naturally at home as the size of clothes or shoe changes. If it stops in an untimely or unusual way, your should take your son or daughter to be evaluated by a specialist.

Continue reading: How to Improve Your Night Routine to Get Better Sleep

Can growth be stimulated?

Some doctors affirm that it’s possible to stimulate the growth of men and women if it’s done before puberty or in its beginnings. That’s why they indicate protein supplements and multivitamins.

They do so to help adolescents, whether male or female, in the development of a stature superior to that which they could reach on average due to the disposition of their genes.

Others believe in hormonal treatments or the practice of sports. Even though the idea that basketball or swimming will make them gain inches or two is a myth, they still recommend it. After all, physical activity is necessary for health and to maintain a healthy balance between body and mind.

Despite recognizing that the genetic factor is key, encouraging healthy sports and rest habits will be a good idea. All this if it is done in conjunction with a balanced diet.

What can change when men and women stop growing?

The main causes of alterations in growth have to do with chronic diseases, such as kidney, liver, gastrointestinal problems, heart disease, or any other condition that’s developing in the central nervous system or bones.

Other congenital conditions or endocrine diseases, such as diabetes and X chromosome abnormalities, may also be the origin of stunting. Socioeconomic factors that lead to malnutrition, especially in the early years of childhood, which are essential for future development, also play a role.

Suffering from malnutrition during the first years of life and for a prolonged period of time determines the final height. This will be the case regardless of the genes that point to an above-average height.

Reversing these effects would imply regular controls with a physician specialized in development and growth. The professional would need to carry out an exhaustive follow-up of the case. While this doesn’t guarantee growth, it’s worth a try.

The age when men and woman stop growing is multifactorial

While it’s true that genetics plays a major factor in determining when we stop growing and how tall we will grow, we already know that environment and nutrition are also important. In light of this, UNICEF offers a booklet on “Child Growth Assessment“, which is devoted to guidance on healthy nutrition.

The same document contains tables with average percentiles for girls and boys. These are practical guides with which we could keep a graph of our children’s height and weight evolution at home.

What to Do When Your Kids Don’t Want to Eat
Mealtimes should be a pleasant time with your family, but if your kids don't want to eat, they can be very unpleasant. You have to be careful to make sure they aren't losing weight. Read more »
Link copied!
Interesting Articles
Anatomy and physiology
The Causes of Stained Teeth