Discover the Weight Loss Benefits of Cinnamon and Honey Tea

If you include cinnamon and honey tea in a healthy routine accompanied by a balanced diet and physical exercise, it can promote faster fat burning 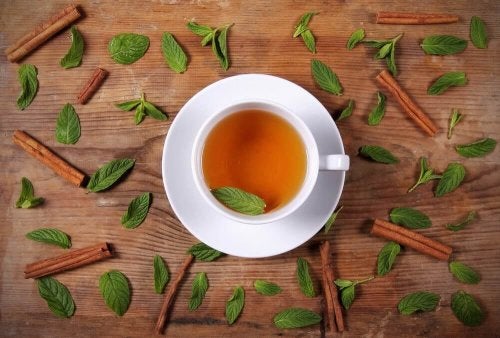 Cinnamon is one of the most well-known and widely-used spices in gastronomy. It’s one of the basic ingredients of many drink recipes, and it has many beneficial properties. Bearing this in mind, it’s worth knowing the properties of cinnamon and honey tea for weight loss.

Cinnamon tea is recommended for keeping your body in good condition when temperatures are low. It also acts against viral and bacterial infections, according to this study conducted by the Baqiyatallah University of Medical Sciences in Iran.

On the other hand, in relation to beauty, cinnamon tea has properties that promote weight loss.

The weight loss properties of cinnamon

It’s possible to lose weight with cinnamon because it accelerates your metabolism, which favors fat burning. This study conducted at Saveetha Institute of Medical & Technical Sciences (SIMATS) in India confirms it. In this regard, it has an effect that generates heat in the body, which affects the most significant fatty tissues like those in the neck and the abdomen.

However, this is just the start of the special properties of cinnamon that you should take advantage of if you want to lose weight. Other effects it causes in your body include the fact that it reduces blood sugar levels and your cholesterol, according to this study conducted by Oklahoma State University.

When there’s a high level of sugar in your blood, this affects blood circulation to each of your vital organs, as well as cellular oxygenation. Two of the potential consequences of this process are obesity and diabetes.

Similarly, when a person has high levels of cholesterol, this also affects blood circulation, which leads to an increased likelihood of heart attacks, strokes, and vascular obstruction, among other things.

The cosmetic benefits and uses of honey and cinnamon

Honey also has an important contribution, whether you want to lose weight or make changes towards a more natural diet. It’s an excellent antioxidant, anti-inflammatory, and anti-bacterial agent, according to this study conducted by KPC Medical College in India.

That being said, however many powers honey has, it does have to be consumed in moderation. This viscous liquid has almost the same calorie content as refined sugar. Thus, if you want to lose weight, it’s best not to go over the recommended amount.

Meanwhile, cinnamon also has important uses for beauty and well-being. With one teaspoonful a day, it can:

How to make cinnamon and honey tea

Preparing a delicious cup of cinnamon and honey tea is very simple.

When should you drink this tea?

When we’re talking about losing weight, it’s important to bear in mind the specific time to drink this infusion.

We recommend drinking a cup of cinnamon and honey tea half an hour before breakfast or before getting ready for bed. You’ll get the same slimming benefits in both cases.

Contraindications of cinnamon and honey

In case you like this recipe too much and think that it isn’t important to limit its consumption, below, we explain some of the contraindications of exceeding your daily dose of cinnamon and honey.

Bear in mind that, to get the benefits, you need to consume it in moderation. Be responsible for your well-being and general health and combine a physical exercise routine with a healthy diet. This cinnamon and honey tea helps to lose weight, but it doesn’t do magic.

Interesting Articles
Babies
Why Do Babies Drool So Much?