The Glycemic Index of Honey and Diabetes

Honey is often used as a sweetener so we often wonder if its glycemic index is safe for people with diabetes and other metabolic disorders. Continue reading to find out more about this subject. 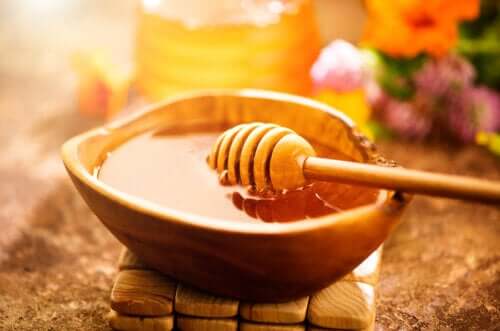 Diabetic people often wonder about the glycemic index of honey and whether they can use it as a natural sweetener and benefit from its medicinal properties. For instance, does this substance increase blood glucose? Can they use it instead of sugar? Today’s article will answer some of these questions so stick around.

The concept of the glycemic index (GI) appeared about 30 years ago. The scientific field uses it to classify foods that contain carbohydrates according to the speed with which they raise blood glucose.

Scientists put the values of each food item in a table in order to compare them and use glucose as a reference. This is because it has a glycemic index of 100. The rest they classify in a range between 0 and 100.

The glycemic index of honey

Honey is made up of carbohydrates (80%) and water mainly. These contain glucose and fructose in higher quantities. The ratio between one type of sugar and another depends on the variety of honey we measure.

In general, floral varieties tend to be more abundant in fructose and, consequently, have a lower GI. The glycemic index of honey is around 61, although it can fluctuate about 3 points — either up or down.

As you can see, the variety of honey and its glucose-fructose percentage is what makes a difference in the value. Therefore, this index places honey within the food items located in the middle group.

Many experts and nutrition professionals have long advocated a diet based on the glycemic index of food items. Those in the group with the lowest GI should abound and those in the highest group should be either eliminated or restricted entirely.

Nutritionists advocate these types of diets because humans can only digest and absorb those with a lower GI slowly. Thus, they lead to lower or longer glucose peaks over time.

Why is this desirable? Well, it’s because people with diabetes, for instance, have difficulty processing sugars effectively. In these cases, good glycemic control helps delay the onset of complications related to the disease, such as kidney damage, nerve damage, or even an increased risk of cardiovascular disease.

The glycemic index has some cons

Looking only at one nutrient (for example, the glycemic index) isn’t usually a good strategy in nutrition science. This is because focusing only on some of the attributes leads us to ignore its value as a whole. These are some things to consider when it comes to the glycemic index:

What does the glycemic index of honey indicate?

Honey’s nutritional and therapeutic value has been well-known for thousands of years. Its nutritional composition includes antioxidants, phenols, organic acids, and trace amounts of vitamins and minerals.

Currently, honey is used as a natural sweetener for remedies associated with natural medicine. In fact, there’s scientific evidence to suggest that a small amount of honey may be good for a person’s health. Without going into much detail, we can summarize its properties as follows:

However, you shouldn’t eat a lot of honey on a daily basis only because of its properties and the fact that it lies in the medium glycemic index.

It’s definitely a better option than refined sugar and artificial sweeteners, but keep in mind that excess sugars can also lead to long-term health problems. Thus, don’t exceed the recommended amount of 1-2 fl oz per day.

In conclusion, a glycemic index is a measuring tool with which to classify the response of blood glucose levels after eating food high in carbohydrates. Honey is one of them and basically made up of two types of sugars: glucose and fructose.

Finally, honey has a medium GI, which could represent a better alternative to sweeten any of your favorite dishes and drinks. However, you must take into account the problems associated with a high intake of sugars in your diet in addition to using this index as an indicator.

The Glycemic Index – Description and Uses
The glycemic index is a measure created to determine how much impact food has on blood glucose in humans. We'll tell you all about it in today's article. Read more »
Link copied!
Interesting Articles
Nutrition
Diet and the Gut Microbiome