How Cinnamon May Help Eliminate Cellulite

Cinnamon oil stimulates circulation and helps the body eliminate toxins that cause cellulite. You can complement your treatment with cinnamon tea, taking full advantage of this amazing cellulite fighting spice. 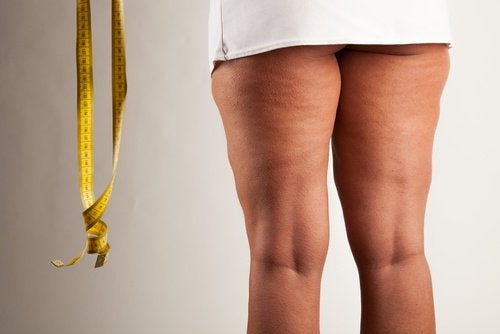 If you suffer from this problem, you may be feel very self-conscious about the way your legs look. Therefore, we want to tell you all about the benefits of cinnamon and how it may help eliminate cellulite.

Cellulite is a cosmetic problem that affects 90% of the female population, particularly during puberty and into adulthood.

It’s caused by changes in the circulatory and lymphatic systems that result in the formation of nodules of fat, which make the skin in the affected area appear saggy and dimpled.

The tissue gradually hardens, making these unsightly nodules of fat increasingly visible and even painful.

Most medical professionals think that cellulite is an unavoidable problem for women because of the constant hormonal changes they experience throughout their lives.

But more recently, this line of reasoning has come under fire, because there are thousands of women who don’t have a speck of cellulite in their bodies. Given this fact, they’ve determined some other causes of cellulite, including:

How Much Time Should You Exercise Every Day?

How cinnamon may help eliminate cellulite

Getting rid of cellulite completely is a difficult process that requires perseverance and effort.

There are lots of treatments or procedures available today that can help eliminate cellulite or reduce it, but you have to use them continuously to ensure it doesn’t return.

Recent research conducted by dermatologists at the University of Grenoble (France) found that cinnamon extract or oil can be a great treatment for cellulite.

In their study there were 80 female volunteers with varying degrees of cellulite; 40 were treated with a common massage for cellulite, and the other 40 received massages with cinnamon oil.

They found that the women in the first group only saw a 10% reduction overall of cellulite; however, women who were treated with cinnamon oil saw up to 60% reduction.

Cinnamon is popular thanks to its pleasant aroma and the delicate flavor it adds to dishes. But, it’s also well known thanks to its use in medicine. The relationship between cinnamon and the reduction of cellulite needs to be clarified and studied more.

Cellulite is related to the accumulation of toxins in the body and problems with eliminating them.

It acts as a natural detox agent, helping the body remove all of those toxic substances that can eventually be harmful.

By removing those wastes and fluids, you also improve your circulation. That’s another reason why cinnamon may help eliminate cellulite.

How can you use cinnamon help eliminate cellulite?

As we mentioned above, treating cellulite isn’t easy and it requires a lot of effort. That’s why we want to be clear that while cinnamon can help reduce your cellulite, the scientific verdict is still out on whether or not it can completely eliminate the problem.

The benefits of cinnamon can be leveraged by incorporating this spice into lots of different recipes. But, the ideal way to use cinnamon to help treat cellulite is by using the oil for a massage.

Cinnamon oil stimulates good circulation and facilitates the elimination of the toxins that build up and cause cellulite. You can find this oil at a reasonable price in natural stores or herbal stores, and you can do the massage treatment at home.

Apply a generous amount of cinnamon oil to the affected areas of your body, and use a circular massaging motion while pressing lightly with your fingertips.

Be careful, because using too much pressure can cause damage to the tissue. An alternative is to have a family member help you with the massage, or to even see a massage therapist.

6 Body Parts You Should Massage

To complement your massage therapy, you can further reduce cellulite by consuming cinnamon tea a few times a day. Cinnamon tea is incredibly beneficial to your health and will help you achieve superior results.

Boil one cup of water and add a few cinnamon sticks or a teaspoon of powdered cinnamon to it. Let it sit for five minutes before drinking.

6 Anti-Cellulite Exercises You Can Do at Home
Exercises that tone your lower body are perfect if you have cellulite in your glutes, hips, and thighs. Try these anti-cellulite exercises for yourself! Read more »
Link copied!
Interesting Articles
Beauty
Is it Dangerous to Wear Hair Extensions?

Beauty
Tips on How to Clean Your Hairbrush

Do you know how to clean your hairbrush? It's normal for this tool to start to accumulate strands each time…

Beauty
Colored Marks on Eyelids: Why Do They Appear?

The colored marks that can appear on eyelids have multiple causes, from metabolic illnesses to allergic reactions. Therefore, they tend…

Beauty
Are Buttermilk Masks Good for the Skin?

Buttermilk masks include natural ingredients revered for their incredible health benefits for the skin. Because of its chemical makeup, many…