The Possible Benefits of Cinnamon

In addition to being a potent anti-inflammatory that helps soothe muscle aches and spasms, cinnamon also has relaxing effects that can relieve feelings of anxiety or irritability. 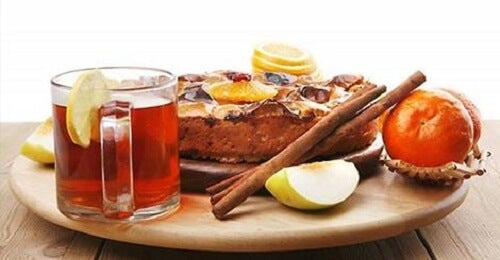 Cinnamon is a spice that people use for dessert recipes or add to their coffee. However, many ancient cultures also considered it a miracle food. Cinnamon may help fight diseases. Nowadays, there are many new possible benefits of cinnamon being discovered every day. Discover them here!

Possible benefits of cinnamon that you definitely didn’t already know

With its distinctive aroma and flavor, cinnamon is one of the most-used spices in the world for food preparation. But cinnamon has many possible health benefits, too.

It was discovered recently that cinnamon may help lower blood sugar levels and help protect us from dyslipidemia. A few other possible properties of this spice include promoting good digestion, helping relieve intestinal discomfort, reducing flatulence, and reducing abdominal inflammation.

Cinnamon’s phenolic compounds (which are also present in grapes and red wine) give this spice its antioxidant properties. We can also highlight its flavonoids contents, which are also found in large quantities in blueberries.

By consuming cinnamon oil, you may reduce the growth of fungal bacteria because it’s a powerful antibiotic.

Read more here: 8 Reasons to Eat Cinnamon in Your Diet

Cinnamon also contains vitamins B1 and C, phosphorus, calcium, and potassium. These are all essential nutrients for our health. It has relaxing effects and may help relieve nervousness, stress, irritability, anxiety, and even depression.

Cinnamon’s anti-inflammatory properties are used to soothe muscle or joint pains from rheumatoid arthritis or stiffness from poor posture. Also, it’s been shown that it may help reduce coughs, colds, and congestion.

In addition, cinnamon may lower glucose levels and fight fat stored in the arteries, making it an excellent choice for people who suffer from diabetes or high cholesterol.

Beyond the advantages listed above, cinnamon is quite good for the digestive system. It has antiemetic, or anti-vomiting, properties. It also may help stimulate the appetite (ideal for patients suffering from certain diseases) and it’s a potent anti-diarrheal.

Women can especially benefit from cinnamon because it may help reduce menstrual cramping and promote circulation.

But if you’re trying to get pregnant, don’t consume too much of this spice because it can have contraceptive effects. If you’re already pregnant, you should avoid cinnamon altogether.

One curious medicinal benefit that you definitely didn’t know is that cinnamon may soothe the pain from a burn to the tongue. Just suck on a cinnamon stick and you may feel relief!

How to take advantage of cinnamon

When you’re buying cinnamon you can choose from stick or powdered form. In either case, you need to handle it with care and store it in a sealed glass container. Keep it in a cool, dark, dry place.

Cinnamon sticks remain fresh for a year and the powder lasts for six months, but you can extend their life by storing them in the refrigerator. When it’s fresh, you can smell it. This spice should always have a sweet aroma.

It’s best to buy organic cinnamon, grown without pesticides or other chemicals that may harm your health. Non-organic products usually lack vitamin C and carotenoids.

To obtain the possible benefits described above, you should consume between 1 and 6 grams of cinnamon a day. To give you an idea of how much that is, a teaspoon of ground cinnamon is about 4 grams.

You can add cinnamon to various dishes – baked into a pastry, sprinkled onto food, raw (this has a strong flavor), or in combination with other foods. It’s best to combine cinnamon with hot foods or beverages because foods at cold temperatures don’t absorb it well.

One of the best ways to consume cinnamon is in a tea or with coffee. This can be especially good for you when you have a cold or the flu. A teaspoon per cup of tea is all you should drink. For coffee, you can add a teaspoon and a half to the grinds before brewing.

Also, cinnamon is delicious in soups. It adds a warming effect and exotic flavor especially to lentils or black beans.

In addition, cinnamon may be a great digestive aid after lunch or dinner. This is great for people who frequently experience heartburn or stomach aches and especially after large meals. Drinking cinnamon tea before going to bed may make you feel less stuffed.

And there are still more ways you may benefit from cinnamon! The aroma of this spice may stimulate brain function and increase cognitive processing. Some people find that chewing on a cinnamon stick has the same effect. Thus, it may be perfect before an exam or when you have to stay up late to study.

Others use cinnamon oil or buy beauty products that contain it.

Lastly, here’s one very popular use: sprinkle ground cinnamon on your desserts that have whipped cream toppings. In fact, all sweets taste more delicious with a little cinnamon added to them. Enjoy!

Cinnamon: Its Aphrodisiac Effect and So Much More
The benefits of cinnamon are countless: It's an anticoagulant, it takes care of your digestion, and it's also an aphrodisiac. Read more »
Link copied!
Interesting Articles
Medicinal plants
Oregano Essential Oil for Cold Relief