Cinnamon has been used for thousands of years. If you're a fan and like its taste, learn about the medicinal uses of cinnamon! 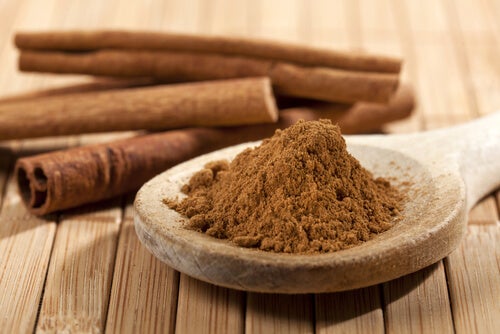 This article focuses on an aromatic plant whose use dates back thousands of years. The medicinal uses of cinnamon are known for centuries. The most well-known variety is “cassia cinnamon” that offers the most curative properties.

However, according to Ayurveda, it works to treat a large range of respiratory, digestive, and reproductive illnesses.

Therefore, cinnamon is great in chocolate and coffee and is really quite delicious.  Learn much more about the medicinal uses of cinnamon below.

The tree that produces cinnamon is perennial and can measure up to 50 feet tall.  It has a double bark and very aromatic branches.  Its natural habitat is in Southern India or in Sri Lanka, but it is now also cultivated in other warm climates.

Moreover, Cinnamon comes from the inner bark layer of the tree.

It provides us with a large amount of calcium, potassium, vitamin A, carbohydrates, fibers, vitamin C, iron, magnesium, and phosphorus.

The use of this aromatic is very old, since the age of the Egyptians, according to the drawings on the pyramids.

It was imported from China 2,000 years before Christ and was used to embalm mummies.  Later, in Greece and Rome, it was used to improve digestion.

However, studies show that it was, together with cardamom and pepper, the first species to be used in the Mediterranean region.

Moreover, it appears in the Bible several times and in the Orient, it is said that it began to be used in the year 2,700 B.C. Moreover, in India, it is also over 1,000 years old.

Its use in the West was related to the wealthy upper class, as it was very expensive.

In the Middle Ages, the Genoese and Venetians sold it through the Muslims.

In the 19th century, it began to be cultivated in other areas of the world, and today, it is commonly consumed with coffee or chocolate.

The Medicinal Uses of Cinnamon

We can say that this aromatic has many different uses due to its properties and benefits.  Its internal use helps the digestive, respiratory, circulatory, and reproductive systems:

The diverse preparations that can be bought or made at home serve to treat many illnesses that relate to fungi and bacteria.  For example:

Other Benefits of Cinnamon

The tradition of Chinese medicine cinnamon’s properties are great for:

Finally, due to its hot and spicy properties, it greatly stimulates blood circulation. Therefore, it’s prohibited for those people with problems with clotting or a tendency to bleed.  Its consumption should also be either avoided or carefully limited in pregnant women.

So, if in doubt, always consult a physician; although the medicinal uses of cinnamon are great, it can have undesired effects on the body.

Did you enjoy reading about the medicinal uses of cinnamon? Let us know!

Coconut Oil for Improving Oral Health
Did you know that coconut oil is the ideal ingredient for rinsing and brushing your teeth, and improving oral health? Learn all about it here! Read more »