Pyorrhea is a gum disease associated with poor oral hygiene. Early intervention is important, as it can cause complications. We'll tell you how to treat it here. 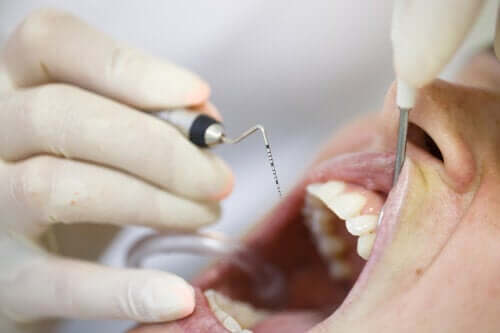 Gum diseases are relatively common in the population. Due to its constant exposure to bacteria, this soft tissue can suffer from inflammatory and infectious problems. Among these, the gum disease pyorrhea has become one of the most relevant, especially because of the complications it brings.

So, what does it consist of? And what does treatment involve?

Pyorrhea is a complication of chronic periodontal disease, better known as gum disease. It occurs when the bones and ligaments that support the teeth become infected due to the proliferation of bacteria.

According to information published by the Spanish Society of Periodontology and Osseointegration, this condition affects 25% of adults between 35 and 44 years of age. Furthermore, its incidence increases from the age of 65 onwards.

In this article, we’ll take a closer look at this condition.

Pyorrhea is a periodontal gum disease that’s the result of the accumulation of dental plaque, which in turn is the result of poor dental hygiene. It manifests itself through inflammation and bleeding of the gums.

At the same time, it also affects the supporting tissues of the tooth, producing gingival retraction and the appearance of interdental spaces.

It’s characterized by severe infection of the ligaments or tissues near the tooth and is dangerous. That’s because it usually doesn’t cause symptoms until it’s already produced serious oral health complications.

The causes of Pyorrhea

The main cause of pyorrhea is the excessive growth of bacteria in the oral tissue. This, in turn, traces back to poor oral hygiene, poor toothbrush use, constant exposure to stress, and smoking. Even genetic factors and anatomical abnormalities affect its appearance.

However, it’s important to note that pyorrhea is the consequence of gingivitis that hasn’t been treated in time. This inflammation of the gums, although painless at first, is the main cause of bleeding gums during brushing.

Other factors that have to do with its appearance are the following:

One of the most concerning things about pyorrhea is the absence of symptoms in certain cases. Although most affected people have had some previous manifestation of gingivitis, this isn’t always the case.

Some don’t present any discomfort until a serious complication appears. Also, some confuse the bleeding with injuries caused by the toothbrush.

In any case, it’s important to be on alert for certain characteristic signs of this condition. The most frequent include the following:

The presence of this symptomatology indicates that the gum tissues are deteriorating. In serious cases, when there’s no adequate intervention, it can lead to the loss of teeth. For this reason, it’s essential to consult a periodontics professional and access treatment.

You may be interested in: What Are the Kinds of Bacteria in Your Mouth?

What does the treatment of pyorrhea involve?

A professional will choose the right treatment against pyorrhea by considering its level of severity. In general, pyorrhea is will be mild, moderate, or severe. An oral health professional should determine the degree of affectation and therapeutic options.

Given the complications that it entails, it’s important to note that there are no home remedies that can alleviate this condition. Stopping the deterioration of the affected tissues requires improving hygiene habits and following the prescribed medical treatment.

Without a doubt, the first measure in the prevention and treatment of pyorrhea is to ensure proper dental hygiene.

This implies correct tooth brushing several times a day, in addition to the use of dental floss and other complementary cleaning products. Options such as daily use of mouthwashes or mouth gel with hyaluronic acid for gums help to give extra protection to the mouth.

Both products have components that help stop the excessive growth of bacteria and the formation of dental plaque. They also strengthen the injured tissues and contribute to their recovery.

In most cases, people with gum disease improve their condition after receiving basic periodontal treatment. This should complement oral hygiene, as it involves procedures that help eliminate bacteria that’s accumulated on the tooth surface and nearby areas.

What does this involve?

When the pyorrhea is too advanced, then basic treatment isn’t enough. If this is the case, the periodontist will suggest an intervention known as periodontal surgery. This consists of accessing the deep periodontal pockets, where the pathogenic agents are located.

If the infection has already caused significant destruction of tissue and bone, then the application of other techniques such as guided tissue regeneration will be necessary.

After treatment for pyorrhea, the patient will need regular checkups with a professional. If proper care is not taken, the disease can reappear after a while.

Therefore, in addition to ensuring optimal oral hygiene with the use of the recommended products, it’s essential to visit the periodontist regularly. The professional will be able to guide you toward good hygiene habits and will intervene with cleaning or prophylaxis, if necessary.