Antibiotics are used to treat urinary tract infections because the causative agents are typically bacteria. We’ll tell you about the various therapeutic options in this article. 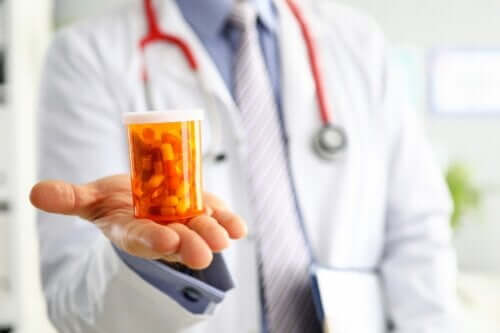 It’s common for doctors to prescribe antibiotics for urinary tract infections, as antibiotics work to cure them. After a medical consultation and diagnosis that certifies bacterial colonization, the professional prescribes antibiotics the patient must take for some days. Most of the time, that protocol is correct and works.

In fact, UTI’s are one of the most common ailments in general outpatient practice around the world. That said, antibiotics have historically been the most effective way to control this condition and prevent complications.

This condition is very common, especially among women. It’s estimated that 20% of the female population will suffer from a urinary tract infection that requires antibiotics at least once in her life.

Although it’s less common in men, a complication that results from not treating it is chronic prostatitis. Many men start with urinary symptoms that they don’t pay much attention to. Consequently, the colonizing bacteria migrate to the prostate and settles there, causing severe inflammation.

In addition, aging seems to be a risk factor. Postmenopausal women and elderly men admitted to nursing homes have a high probability of becoming infected.

As we mentioned above, bacteria are the microorganisms that are most related to urinary infections. They cause more cases than viruses and fungi.

Among bacteria, Escherichia coli causes up to 80% of cystitis and urethritis. This bacterium regularly inhabits the digestive system, particularly in the last intestinal section. Therefore, the same person transmits it to themselves.

In women, it’s associated with their shorter urethra and how close their urinary and digestive systems are. This favors the passage of Escherichia coli between the anus and the urethral opening, where it ascends to colonize.

To a lesser extent, other microorganisms can cause urinary infections, among which we can mention the following:

All these bacteria are sensitive to some type of antibiotic. Therefore, an antibiogram may be required before starting treatment. This test measures pathogen sensitivity to drugs to prescribe the correct one that’s capable of killing the microorganism.

The most common antibiotics for urinary tract infections

Once the medical professional identifies the causative agent and the antibiogram determined the most appropriate antibiotic for that urinary infection, the treatment protocol begins. No drug is ideal. Instead, the prescription must be adapted to each particular case.

In this sense, it’s important to take the patient’s age, possible diseases, allergies, and the type of disorder caused in the renal system into account.

So what are the most commonly used antibiotics?

Below, we’ll explain this in detail.

As it’s of the oldest groups in the fight against bacteria, penicillins have evolved. Amoxicillin and ampicillin belong to this family and are effective against many different microorganisms. Similarly, there are cephalosporins, such as cephalexin, cephalothin, and ceftriaxone.

Most Escherichia coli and Proteus are sensitive to these antibiotics. They’re a great option for pregnant women since studies haven’t recorded effects on the fetus. Thus, they’re quite safe during pregnancy.

This family, whose representative is gentamicin, can fight gram-negative bacteria. This means that they don’t stop bacterial growth but rather kill gram-negative microorganisms. For this reason, doctors prescribe them for enterococci.

However, they have many adverse effects, which limit their use. They shouldn’t be prescribed to pregnant women and infants who are still developing their tissues due to the possibility of interfering with the cellular formation processes.

With the passage of time and the discovery of new drugs, some new drugs gained ground and became the antibiotics of choice against urinary tract infections. This is the case of quinolones, which displaced amoxicillin and penicillin.

Although this hasn’t always been based on scientific evidence, it possibly occurred due to the ease of use of these drugs, as they require fewer doses for fewer days.

A few of the members of this family are norfloxacin, ciprofloxacin, pefloxacin, and gatifloxacin. The first two are the most indicated for this condition due to their bactericidal action. An advantage of this group is that quinolones are strongly concentrated in the tissues where they must attack.

For example, in men, their power to penetrate the prostate makes them the first-line treatment to prevent the condition from becoming more chronic. Meanwhile, norfloxacin is found in high concentrations in the urine once it’s ingested.

Find out more here: Uses and Side Effects of Norfloxacin

This drug combination is considered an antibiotic on its own. However, it can’t always be used because its ability to act is limited to the bacteria that are most frequently detected in urinary tract infections. Nevertheless, if the antibiogram allows it, it isn’t a bad option.

This drug has a good effect on the prostate, which is why it’s the second line of choice for men after norfloxacin. Also, its low side effects give it a safety profile that’s suitable for almost any age and condition.

Safe use of antibiotics for urinary tract infections

Regardless of the type of infection, the safe use of antibiotics is essential. When taken and prescribed indiscriminately, bacterial strains become resistant and their treatment becomes increasingly difficult.

Therefore, it’s essential to consult a doctor and get an antibiogram if the urgency of the case allows it. Thus, the choice of the antibiotic is based on evidence of its effectiveness in killing bacteria and reducing the appearance of resistant strains.

Why Urinary Tract Infections Occur
You can know why urinary tract infections occur by analyzing the conditions that predispose them. Every age and circumstance has its own risk factors. Read more »
Link copied!
Interesting Articles
Illnesses
Itchy Skin or Pruritus: Symptoms, Causes, and Recommendations

Exercise and sports
Is Walking After Eating Healthy?

Walking has many health benefits. It’s a simple exercise that keeps your heart healthy, helps burn calories, and can improve…