Bacteria that Cause Cavities

The Streptococcus mutans species is one of the main bacteria that cause cavities. To prevent them from proliferating and damaging your teeth, it's best to maintain good oral hygiene. 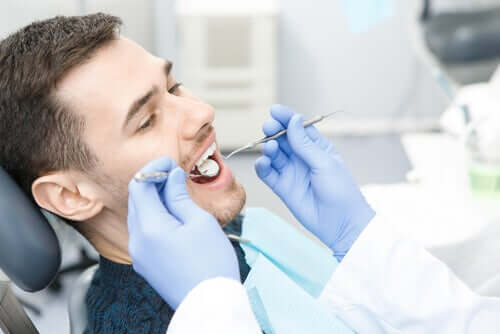 Bacteria that cause cavities are microorganisms that organize themselves in a biofilm called dental plaque. In practice, this is seen as a white spot on the tooth, and, as the decay progresses, a cavity forms, exposing the dentin.

This process includes several stages in which the bacteria that cause cavities also alternate: in each phase one of them predominates. In general, Streptococcus mutans bacteria are present at the beginning of the process, while Lactobacillus and Bifidobacterium predominate in the advanced stages.

Although everyone has microorganisms in their mouths, bacteria that cause cavities aren’t present in healthy individuals. Among those who have teeth in perfect condition, the Streptococcus sanguinis species predominates.

A cavity is the destruction of dental tissues by acids produced by bacteria grouped in dental plaque. This is a film formed on the teeth by bacteria that cause cavities.

There are several types of cavities:

Bacteria that cause cavities

Bacteria of the Streptococcus mutans species are the most numerous in dental plaque, with a high incidence at the beginning of cavities. This type of bacteria is gram positive, facultative anaerobic, and spherical. It belongs to the lactic acid bacteria group and grows in low pH environments.

These bacteria are transmitted from person to person and adhere to the teeth and gums, forming mounds. Frequently, and especially in deep cavities, they’re accompanied by bacteria such as S. salivarius, S. parasanguinis, and S. constellatus. You can avoid their spread with good dental hygiene habits.

In some cases of cavities, S. mutans isn’t present, but S. sobrinus, S. oralis and S. salivarius are. When a cavity is already there, the presence of various types of Lactobacillus is common, with a predominance of L. gasseri and L. ultunensis.

Other bacteria that cause cavities are Actinomyces, which are particularly present in many cases of root cavities. However, its role in the onset and progression of the condition isn’t clear. This bacterium is one of the first to colonize children’s mouths.

Bifidobacteriums are anaerobic bacilli that group together in the form of a branch, and are usually present in the healthy intestinal tract. The B. dentium, S. inopinata (B. inopinatum), and P. denticolens (B. denticolens) have been found in several cases, appearing when the cavity is already advanced.

Prevotella is another anaerobic bacillus, and one of the most common in the oral cavity. It has been associated with periodontal disease and endodontic infections, but the role it plays in cavities is unclear. On the other hand, Veillonella is very numerous in healthy mouths.

How to fight bacteria that cause cavities?

There are several factors that promote the growth of bacteria that cause cavities. The first is excessive consumption of foods rich in carbohydrates, such as sugary drinks, sweets, and pastries. The more you eat, the greater the risk of developing cavities.

Other foods rich in starches, such as potatoes or bread, also promote the development of cavities. The way you eat them can also influence cavity formation. It’s better to eat these products at one time and not to eat small pieces over time. It’s also important to know how to combine them.

Good oral hygiene is key. We recommend you brush your teeth one hour after each meal. Also, use dental floss, a fluoride mouthwash and, of course, visit the dentist twice a year.