What Are the Kinds of Bacteria in Your Mouth?

There is a large amount and variety of bacteria in your mouth. The majority of these bacteria are fought by the enzymes in your saliva, but there are many that survive and live in different areas, sometimes causing health problems. 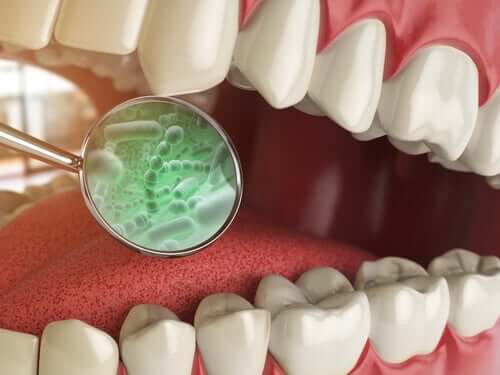 There are numerous bacteria in your mouth. In fact, it’s been calculated that there are about 100 million bacteria for every millimeter of saliva. These correspond to more than 600 species of bacteria! In reality, your mouth has the perfect conditions for an infinite number of microorganisms to take refuge there.

Despite all this, many of the bacteria in your mouth don’t survive long. A good part of them is attacked by the enzymes in your saliva, while another part enters your digestive system, where they are quickly destroyed.

That said, we should also mention a group of bacteria that manages to survive and ends up living in your mouth. When this happens, it can cause problems like cavities or other diseases. The best way to fight them is with good oral hygiene.

The bacteria in your mouth

Your mouth has many surfaces, and each one of them is covered in many bacteria. Some bacteria in your mouth influence the development of diseases like cavities or periodontitis. Both are risk factors for developing other, more serious conditions, like diabetes mellitus and cardiovascular diseases.

The composition and concentration of bacteria in your mouth depend on several factors:

Bacteria in the mouth, along with other microorganisms, are known as oral microbiota. This population isn’t fixed, but is constantly changing, even due to factors as simple as yawning, kissing, or eating certain foods.

In general, aerobic and anaerobic bacteria dominate your mouth, both gram-positive and gram-negative. Among these, the genera Lactobacillus, Actinobacillus, Staphylococcus, and Streptococcus stand out.

Keep reading: 5 Habits to Help You Take Care of Your Dental Health

Factors like loss of teeth, and diseases like gingivitis, alveolitis, or periodontitis, can cause changes in your saliva’s microbiota. Smoking and insufficient hygiene can also affect.

In your buccal mucosa the following types of bacteria are most common:

Bacteria on your teeth

If your teeth don’t have cavities, the most common bacteria you’ll find there are:

Overall, your teeth are surfaces that promote the formation of biofilms. These biofilms can do different things based on several factors. Some bacteria like Streptococcus mutans, Actinomyces y Lactobacillus influence the formation of cavities and periodontitis.

Also, read: Care After Getting Your Wisdom Teeth Pulled

Alsa, a biofilm can form on your gums, which promotes diseases like gingivitis. If your gums are healthy, the most common microorganisms are proteobacteria. Typically, this includes gammaproteobacteria of the genus Acinetobacter, Haemophilus, and Moraxella. However, when you have a health problem you can also find Streptococcus, Granulicatella y Gemella there.

Also, on the surface of the biofilm on your gums there may be Treponema denticola along with Porphyromonas gingivalis and Tannerella forsythia. Likewise, there can be viruses and, sometimes, microorganisms like fungus. However, mouth diseases change what bacteria are found there.

Bacteria on the tongue

The biofilm that forms on your tongue is also dynamic and hosts many of the bacteria in your mouth. Overall, approximately 45% are facultative anaerobic gram-positive cocci. This includes Streptococcus salivarius, followed by Streptococcus mitis, streptococci from the milleri group, and Streptococcus mucilaginosus.

Plus, you can also find strict anaerobic gram-negative cocci and gram-positive facultative anaerobic bacilli. Also, there might be a smaller percentage of diverse species of the genera Lactobacillus, Neisseria, Fusobacterium y Haemophilus.

On the top of the tongue of people with halitosis, you can find Fusobacterium nucleatum, Porphyromonas gingivalis, and Tannerella forsythia.

Amazingly, there can be so much life in our mouths!

Prevent pathogenic bacteria in your mouth

Oral hygiene is the key to preventing pathogenic microorganisms that can affect your mouth. Likewise, regular visits to the dentist allow you to identify risk factors and diseases as they are starting, allowing you to stop them before they cause permanent damage.

If you have any questions or if it’s been a long time since you last had your mouth checked, make an appointment soon!

A Guide to Using Mouthwash
You can use mouthwash every day as a preventive measure but also to treat certain dental conditions. There are several types of mouthwashes. Read more »
Link copied!
Interesting Articles
Anatomy and physiology
Why Do Women Experience More Gas During Menstruation?