White Spots on the Nails: Where do They Come From?

Leukonychia is the official scientific name that refers to the appearance of white spots on your nails. There are different kinds and causes. However, it isn't proven to be a sign of a calcium deficiency like many people believe. 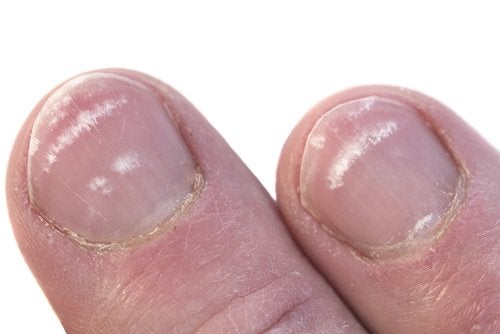 Ever wonder why those small white spots appear on your nails? Spoiler alert: it’s not from a lack of calcium, like you were led to believe. Find out about the many reasons why this happens and how to prevent it. Today, we want to tell you the real reasons they show up on your nails. The answers are fascinating!

The myths surrounding white spots on your nails

Most likely, at some point in your life you’ve looked at your nails and seen them: small white spots or lines that appear on your nails.

Your grandparents might say they’re a result of the lies you tell.  Your parents might have told you that you need to drink more milk because you need more calcium.

But, none of these theories are the truth. That’s why it’s time we clear things up and tell you why they really appear.

Read More: Get More Calcium Healthily with these Seeds

Leukonychia can happen at any time and disappear just as quickly. It can be divided into four types:

These are small spots that spread up and down your fingernail. They usually appear during childhood. This is because of minor, repetitive damage.

This is when parallel, horizontal bands appear. They’re more common in women. They’re caused by damage from aggressive manicures, and can also show up during chemotherapy.

These affect a specific part of the nail. They usually appear at the edges of your nails.

This is when the whole nail has a white-ish, almost homogeneous appearance. It’s a rare condition. It can appear at birth or at an early age. In most cases, it’s hereditary.

A lack of zinc and spots on your nails

White spots are NOT a result of not having enough calcium.  But that is along the right lines: you’re missing a nutrient.

The white lines and spots develop at the root of the nail. They keep moving forward as the nail grows.

A zinc deficiency may be the source of the problem.  When the nail matrix is ruptured, that’s where you’ll see a white spot.

Leukonychia can also be due to a disease or health problem. For example:

Also, not getting certain nutrients can make white spots more likely to show up. This is because they help with the growth and development of fingernail compounds.

Some of these are:

If a lack of these nutrients causes white spots because they affect nail formation, it can also make them weak and fragile. As a result, they become more vulnerable to the kind of damage that leaves lasting marks.

Other causes of white spots on your nails.

These marks aren’t dangerous, but they don’t look pretty, whether you’re a man or a woman.

Remember, there are other potential causes: they could come from inflammation and damage to the matrix. This leads to an abnormal process of keratinization.

You have to keep in mind that fingernails grow one tenth of an inch per month. So, if there’s a spot in the middle of your nails, you’ll know about when it appeared: roughly two or three months ago.

You might not have spotted it before then because it was so close to the cuticle.

Of course, there are some everyday habits and practices that can produce leukonychia. They can even happen when you think you’re paying your nails extra attention.

Here are some examples:

How can you avoid white spots on your fingernails?

At the moment, there aren’t any treatments for leukonychia There’s only one way to get rid of spots on your nails. You have to wait until they grow enough that you can cut them or file them down.

While this happens, if you can’t stand to see lines on your nails, you can either paint them or wear gloves.

It’s worth mentioning that there are times when it’s best to see a dermatologist. For example, if you see marks all over your nails or if they become very clear and take on an opaque tone.

This could be due to a permanent problem with the nail matrix.

If you don’t want to see all those “little clouds” in your nails, you need to:

Beauty
Things to Consider for the First Time at the Spa

Interesting Articles
Medication
Benefits and Side Effects of Isotretinoin for Acne

Illnesses
All About Ramsay Hunt Syndrome

Ramsay Hunt syndrome is caused by the same virus that causes chickenpox. It causes symptoms and signs that appear because…