Why You Shouldn't Drink Cow’s Milk

Recent studies have determined that cow’s milk is not as healthy as many of us have been led to believe. Learn more in this article. 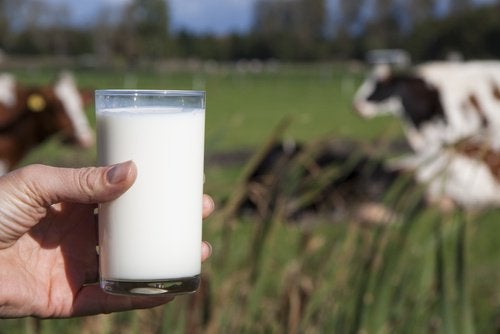 For hundreds of years, cow’s milk has been considered a basic part of every person’s diet in many places.

It’s true that this food contains some essential nutrients that your body needs, such as calcium. However, recent studies have determined that cow’s milk is not as good as it appears. This is because is has been linked to variety of illnesses and disorders that are becoming more and more common among people.

Learn more in this article.

Read this article: What to Do for Calcium Deficiency

How Does Cow’s Milk Affect Your Health?

Just as with other foods, the opinions on the benefits or dangers of cow’s milk are divided. For many, it’s an exaggeration to consider that a food that’s so popular could be harmful to our health. After all, cow’s milk has been a part of most people’s diet for many years. However, there’s a very good explanation that we should all keep in mind.

According to studies, a lot has changed in how we produce this milk.

The amount of milk produced continued to increase over the years. Today, they use a variety of artificial breeding techniques that include the use of antibiotics, genetic breeding selection, change in feed and the use of growth hormones. Together, all of these increase the production of meat and milk in surprising quantities.

The industry has tried to keep this secret. However investigations have revealed that all of these techniques and alterations have negative effects on the health of consumers.

1. Cow’s milk reduces the level of iron in children.

The National Academy of Pediatrics in the United State published a study in 1993 in which it indicated that no child should drink cow’s milk before the age of 18 months. This is because it could interfere with their iron production. Furthermore, cow’s milk contributes to the loss of essential fatty acids and vitamin E.

This is used to make glue and can cause inflammation of the soft tissues in many children. These tissues are found in the throat, nasal cavities and paranasal sinuses. If these become inflamed, the child can have difficulty breathing.

3. It has been linked to several diseases.

The consumption of cow’s milk and products that come from it are linked to a variety of illnesses including diabetes, multiple sclerosis, heart disease, Crohn’s disease, irritable bowel syndrome and even cataracts.

These come from the artificial breeding and raising techniques of the cattle.

This quantity of antibiotics contributes to the growth of bacteria that are more resistant to antibiotics. Thus, once in the body, they’re more difficult to fight, especially in people who suffer from serious diseases.

It’s good to keep in mind that cow’s milk and the products that come from it contain about 59 different types of synthetic hormones, including steroids, adrenals and sexual, among others. These can combine with other toxins and cause degenerative diseases.

Milk contains high levels of fat. This can begin to raise cholesterol levels and create a risk of arterial obstruction, especially in young people.

7. It’s really not meant for humans.

Cow’s milk exists for the digestive system of bovines (cows), not humans. When people consume cow’s milk, they’re ingesting components which upset their digestion and which obstruct the absorption of nutrients from their diet.

8. It can cause allergies.

The consumption of cow’s milk can cause many cases of allergies and food sensitivities. After all, many people are lactose intolerant without even knowing it.

9. It has been linked to prostate and ovarian cancer.

Various studies have found that cow’s milk is linked to prostate cancer in men, especially if they consume three glasses a day. In the case of women, the risks of ovarian cancer can be as high as 66%.

10. It can cause the effects of asthma.

Finally, thanks to casein, cow’s milk produces histamine, and then mucus. For this reason, scientists now associate the consumption of milk and its derivatives with asthma.

How to Control Allergies with Natural Antihistamines

Whole Milk Yogurt or Low-Fat Yogurt? Which Is The Best For Your Diet?
The question is, "is whole milk yogurt or low-fat yogurt better for my health?" "Which is the best to include in my diet?" Read more »
Link copied!
Interesting Articles
Did you know?
World Blood Donor Day Helps Save Lives

An abdominal aortic aneurysm is an abnormal and persistent dilation of the aortic blood vessel. It's a condition that can…