Egg and sugar free French toast is simply healthier and just as delicious. You have to try it! 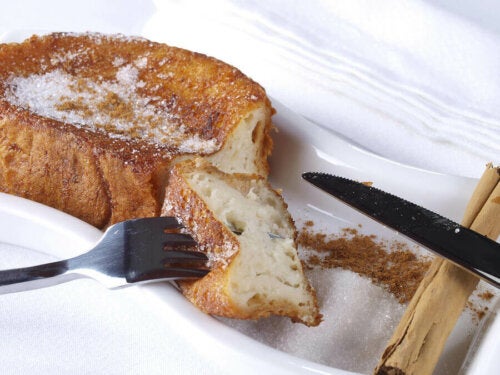 French toast is one of the typical sweet dishes in several different national gastronomies. Usually, people eat it at Easter in Spain and brunch in the States, but let’s be honest: it’s so delicious that it makes you want to eat it all year round! In this article, we’ll share a step-by-step recipe for sugar-free whole grain vegan French toast.

It’s vegan French toast because it doesn’t contain eggs or any other animal products. However, everyone can eat it! In fact, we encourage you to do so. With no added sugar or eggs, it’s a much healthier option than traditional French toast.

This French toast is just as rich and smooth as the original recipe. However, its fat content is much lower and it’s perfect, not only for people who follow a vegan diet but for those who suffer from food intolerance or simply want to take care of their health.

The main ingredient in this recipe is whole wheat bread – that is, bread made from whole wheat flour. This is a source of fiber and complex carbohydrates, in addition to providing B vitamins, minerals such as phosphorus and iron, and having a very low-fat content.

In this recipe, we replaced the traditional cow’s milk with almond milk and sugar with stevia. Of course, if you want, you don’t have to sweeten the French toast (after all, the almond milk already makes it sweet) and then, spread a little honey on it.

At the nutritional level, almond milk provides between 25 and 50 calories per 100 grams and is rich in monounsaturated fats (“good” fats), in addition to vitamins B6 and E, among others.

Discover: How to Make Almond Milk to Lose Weight

How to make vegan French toast

Would you like to change your traditional French toast recipe for this vegan one? You won’t regret it: it’s extremely healthy and delicious. Don’t hesitate to make it and enjoy it with your friends or family!

What did you think of this easy recipe for vegan French toast with whole wheat bread and without sugar? It’s very healthy and your whole family will love it! And the best part? Since it doesn’t have saturated fats or sugars, you can make it more often than traditional recipes!

4 Calorie-Rich Vegan Foods to Gain Weight
Discover vegan foods you should include in your vegan diet if you want to gain weight. Don't miss out on them! Keep reading to learn more. Read more »
Link copied!
Interesting Articles
Vegetarian and vegan
The Difference Between Shrimp and Prawns

Vegetarian and vegan
How to Make Vegan Stuffed Mushrooms