Children with attention deficit disorder often have difficulty concentrating and learning. Because of this, their school environment is affected, as are their personal relationships. 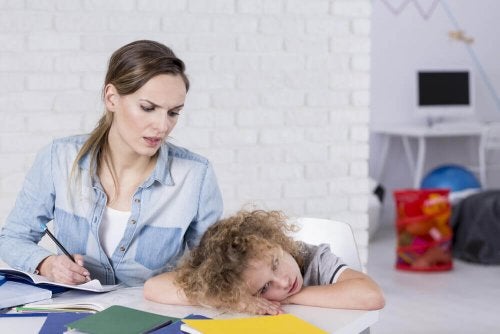 Attention deficit disorder in children is one of the greatest causes for worry among parents. However, due to its complexity, it is difficult to get an accurate diagnosis when you first notice its early signs.

Children with ADHD (attention deficit hyperactivity disorder) has more trouble focusing or staying still. Also, they have impulsive behaviors. What’s more, they may find it difficult to form interpersonal relationships in school, family and social environments.

The disorder is usually diagnosed at 7 years old, but many of its signs are noticeable before. However, the problem is that it’s more difficult to diagnose between 4 and 6 years. This is because it is hard to tell the difference between these signs and young children’s normal behavior.

In spite of this, it’s essential that you learn about it. This is because you can use its first signs to begin to track it.

Below, we will review its main causes and the signs that help you detect it.

It’s not known for sure what causes attention deficit disorder in children.

However, it is believed that genetic, neurological and environmental factors are involved in its development.

More specifically, its possible causes include:

Some have suggested that eating refined sugar can also affect the appearance of this condition. However, there’s not enough scientific evidence to confirm this claim.

Read this article: How to Control Child Rebellion

The signs of attention deficit disorder in children vary. Also, they tend to change as the child moves through the stages of development. However, the disorder can continue into adolescence and adulthood.

That said, seeing one or more sign does not mean that the diagnosis will be this disorder exactly.

For this reason, once you detect warning signs, you should get an evaluation. Seek out a professional on the subject, such as a pediatric neurologist or psychiatrist.

Tests can take several months before a final diagnosis. Often, they include interviews with parents and teachers.

Signs of ADHD in Children:

In order to get this diagnosis, you must complete a process that takes months. During this time, a mental health professional or pediatrician specialized in ADHD bases this on criteria in the Diagnostic and Statistical Manual of Mental Disorders (DSM-5).

The process takes time for the professional to meet the child and analyze his relationship with his environment. Also, it’s essential that they get to know his family and the people close to him.

If they confirm the condition, they will create a management plan. They will adapt it to each particular situation.

Sometimes, they may recommend medications. However, they almost always recommend behavioral therapy as a first step. Occasionally, it’s necessary to use the two together.

The exact length of the treatment cannot be given. Rather, it depends on how each person develops.

Discover: Values in the Home: The Secret to a Successful Generation

Attention deficit disorder in children affects the child’s ability to focus. Also, it can be accompanied by symptoms of hyperactivity and impulsiveness.

Although it sometimes appears at very young ages, diagnosis is only possible when the child should already be able to manage many of his or her behaviors.

Pay Attention: These Traits Could Indicate that Your Child Has Learning Difficulties
Angelica is 4 years old. In class she doesn't speak or share with other children. She also doesn't seem to follow the teacher's instructions. The school psychologist and the teacher arrange a meeting with Angelica's parents because they glimpse that she possibly has learning difficulties. Read more »
Link copied!
Interesting Articles
Healthy mind
Wu Wei, The Art of Solving Problems Effortlessly