How to React to an Infidelity?

The wounds of infidelity aren’t forgotten with time and almost never heal, but we all deserve second chances. In this article, learn how to react to an infidelity. 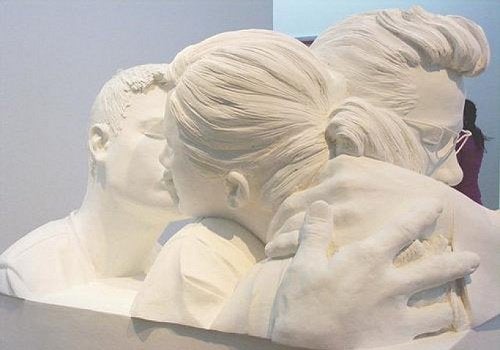 When our partner is unfaithful, we lose our trust in them and many of our values fall to the ground. But how should we react to an infidelity? What is the best option?

The impact of infidelity

Infidelity oftentimes happens when you least expect it. A message on our partner’s cell phone. An email. A photograph or an inescapable clue that the person you love has been unfaithful.

How should you react to an infidelity? Psychologists tell us that human beings are obsessed with understanding everything. We all tend to look for an explanation such as:

One aspect that remains clear is that after suffering an infidelity, we often feel a direct impact on our self-esteem. We also feel anger, pain, hatred about what happened, and humiliation. Hence, sometimes we run the risk of falling into a depression.

But how should we actually react? What would be the most sensible thing in this case?

How do people usually react to an infidelity?

The way people react to an infidelity usually depends on several factors:

Now, let’s look at some of the most common ways people react to infidelity:

1. Looking for someone to blame

This is one of the most common reactions. In our quest to understand, we sometimes obsess over finding someone to blame. Or we focus all our contempt toward our partner or the person they were unfaithful with.

Looking for someone to blame helps us let off some steam, but it must be something specific. A separation or forgiveness usually come after this.

There are many people who, after an infidelity, look for ways to hurt their partner. They may decide to separate and end the relationship. Or maybe even decide to continue living together.

Whichever way, some people seek revenge by having another relationship and trying to harm their partner in the same way.

Discover: When You Should Forgive Infidelity and How to Do It

We must be clear that forgiving doesn’t always mean reconciliation. We can continue with the relationship but forgiving isn’t forgetting.

Sometimes we are forced to rebuild the relationship from a troubled resentment foundation, which isn’t always easy. In spite of everything, we may also succeed.

If forgiveness is offered because there’s a real and true repentance, we can accept it. But it won’t be easy. We must learn to live with the infidelity.

4. A new phase in the relationship

Although it may surprise you, after an infidelity, some couples open a new intense chapter in their relationship. Reconciliation arises, as well as a phase of greater emotional and sexual intensity.

They bring together the fear of losing their loved one, their guilt, and those long conversations in which important aspects have been clarified. It’s surprising, we know, but it usually happens.

It’s unavoidable and understandable. Infidelity is a betrayal. It’s an offense to our feelings and an attack on our self-esteem and personal balance. Not all people are able to offer forgiveness and not all people deserve to be forgiven. More often than not, infidelity leads to a breakup.

But what’s the best option after an infidelity?

There’s no best or worst option. The best option is one that gives us emotional balance and tranquility. The wounds of infidelity aren’t forgotten with time and almost never heal. We can attempt reconciliation, but we’ll always be afraid it will happen again. Forgiveness is always therapeutic but sometimes it isn’t for everyone.

But if you consider the betrayal a one-time occurrence and you think it won’t happen again, go ahead. Everyone deserves a second chance, but the other person must work hard and prove their sincere affection and genuine repentance.

Forgive if you’re able to and if you think you’ll continue the relationship. But if your self-esteem is fragmented and you feel your heart is too broken to move on, set distances and end the relationship. Now is the time to recover, get up again, and look to the horizon with hope.

4 Ways to Overcome Infidelity Successfully
Infidelity is one of the most complicated and difficult things that a couple can go through. Here are 4 ways to help overcome infidelity. Read more »
Link copied!
Interesting Articles
Conflicts
The Fear of Abandonment in Romantic Relationships