Fat-Burning Spices You Probably Already Have

The detoxifying and anti-inflammatory properties of some spices can help you burn fat when added to your daily diet. 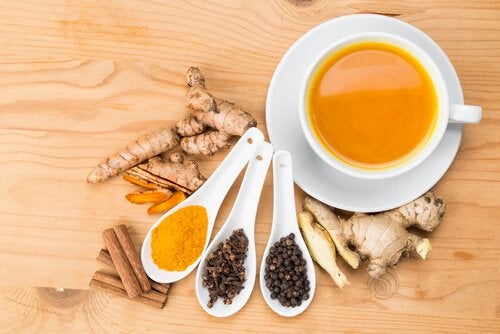 Fat-burning spices help maintain your ideal weight by improving your metabolic activity, controlling hunger, and reducing fatty deposits. Not only are spices rich in nutrients, but they’re also safe and healthy.

While mainly known for their aromatic qualities, spices are also rich in antioxidants, essential oils, and other key components that aid in the loss of weight. Although they’re not miraculous, adding them to your daily diet will bring many benefits to your health and weight.

The most interesting part is they can be easily included in any diet. Let’s take a look at the top eight fat-burning spices.

Fat-Burning Spices You Already have in Your Kitchen


Cinnamon is one of the top fat-burning spices. It’s been an ally in metabolic disorders since ancient times. In addition, modern studies have shown that it’s active ingredients help regulate blood glucose levels.

Furthermore, it should be mentioned that it also lengthens the feeling of fullness, especially if you suffer from eating anxiety. Due to its flavor, it’s a perfect addition to infusions, vegetable milk, and desserts.

The nutritional and medicinal properties of turmeric have been harnessed by many cultures since ancient times. Now, it’s currently used in many kitchens and is often a key ingredient in weight-loss diets.

Its main benefits derive from curcumin, an antioxidant that decreases adipose tissue. This substance, in addition to the polyphenols contained in turmeric, leads to the burning of excess fats and so it prevents overweight.


Within the list of spices with fat burning properties, cayenne pepper stands out as an ally of metabolic disorders. Capsaicin, its main compound, produces a thermogenic effect that increases energy expenditure.

It’s also a natural appetite suppressant as it lengthens the feeling of fullness and it curbs your appetite. As a consequence, you’ll help prevent excessive calorie intake.

It should be used in moderation, however, as it can irritate your digestive system if taken in large quantities.

The inclusion of ginseng in a regular diet provides many benefits to your metabolism. Its effects are well-known on people who have difficulty losing weight when added to a healthy diet.

Thanks to its active ingredients, this popular spice improves insulin absorption and helps regulate blood glucose levels. In addition, it decreases eating anxiety and increases the metabolic rate which optimizes caloric burning.

Black pepper is one of the fat-burning spices that can be eaten regularly. Although its flavor is the spice of any dish, its nutritional value is another great reason to consume it regularly.

Its main active ingredient is piperine, and it, in addition to providing the characteristic spiciness, also blocks the formation of new fat cells. Furthermore, if you use it with capsaicin, you can burn a significant amount of calories.

Rosemary is another ingredient that can easily be included in recipes, given that it improves the taste of any dish it touches. It’s one of the most recommended antioxidant and anti-inflammatory spices out there, because it prevents diseases and helps control weight.

Not only does it stand out for its digestive qualities, but it’s also a natural sedative that helps lessen anxiety and curb your  appetite. Finally, its nutrients support metabolic functions and reduce levels of glucose.

Ginger has become popular throughout the world as one of the best fat burning spices. Its active ingredient, gingerol, produces a thermogenic effect in the body that increases your metabolic rate and promotes caloric burning.

It also contains powerful antioxidants and anti-inflammatory substances that together facilitate the elimination of accumulated liquids and toxins. Thanks to this, your organs work optimally and reduce interference in the processes that allow you to lose weight.

Adding mustard to daily dishes promotes weight loss. These little seeds have the ability to increase the metabolic rate by up to 25%. That is, they help the body burn calories more efficiently.

In fact, once this substance breaks down fat, it also reduces the chance of adipose tissue coming back. Furthermore, it improves blood circulation and promotes the elimination of toxins.

Are you trying to lose weight?

Try the 15 Minute Fat Burning Routine
This 15 minute fat burning routine is great for those who want to start making exercise a habit. It's made up of a set of exercises that are very easily to do. The key is to keep your back straight and breathe properly.  Read more »
Link copied!
Interesting Articles
Weight Loss
White, Beige, and Brown Types of Body Fat