Childhood Enuresis: How to Treat It?

Childhood enuresis is a common problem among children between the ages of 4 and 6. Even though this condition doesn't usually affect their health, it's essential to pay attention to it so that it won't affect the child's self-esteem. 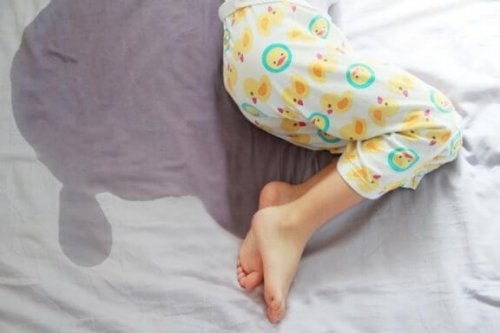 Childhood enuresis is a form of urinary incontinence that usually affects children between the ages of five and six years. It is characterized by the repeated expulsion of urine, either during the day or in bed at night.

In order for it to be considered as a disease, the loss of urine must take place at least twice a week for at least a period of three consecutive months. If it isn’t a disease, then it’s a behavioral problem.

The good news is that there are several ways to help your child learn how to establish proper and regular urinating habits. In today’s article, we’ll take a look at the main symptoms of this condition and several measures that can help you control them.


The main symptom of childhood enuresis is the involuntary loss of urine. This can occur several times during the night and, to a lesser extent, during the day.

Children with this condition tend to have more difficulty waking up and may suffer from constipation.

In order to diagnosis childhood enuresis, the pediatrician or doctor in charge should consider the child’s age, urinary frequency, and medical background.

They should also assess the parents’ attitude towards dealing with the problem and suggests some additional tests to rule out any other diseases.

Diagnosis is positive if:

Read this article too: The 6 Best Self-Control Techniques

Many parents don’t consult with a pediatrician when their children have childhood enuresis and in turn, they end up ignoring the treatment that’s required for this condition. Even though it’s true that the problem decreases as the child grows, sometimes it can get complicated due to not providing any proper treatment.

It’s important to provide a diagnosis on time because sometimes the condition has an underlying cause. Also, proper intervention prevents the condition from affecting a child’s social life.

So, what is the treatment?

A large part of the treatment for childhood enuresis is focused on correcting the child’s behaviors. Therefore, before the doctor suggests any medication, the physician must explain to you about the disease and give you some recommendations to counter it.

It may include the following:

When the doctor recommends medication for childhood enuresis, the prescription may usually include desmopressin. This drug decreases the volume of fluid during the night. It has an effectiveness that can range between 40 and 80 %.

Sometimes also the use of oxybutynin can be suggested, which acts by increasing the capacity of the bladder. Ultimately, the doctor may recommend imipramine, which has an antidiuretic effect. This option is only for specific cases due to side effects.

Check out this article too: Want to Sleep Better? Try Out These 7 Nighttime Habits

Childhood enuresis is a benign disorder that disappears as the child grows. However, given to the fact that for some parents this condition is difficult to manage, it’s worth going over some final recommendations:

Childhood enuresis is a common problem among children between the ages of 4 and 6. Even though this condition doesn’t usually affect their health, it’s essential to pay attention to it so that it won’t affect the child’s self-esteem. Their treatment depends to a large extent on teaching them good behavior.

Children
Strategies To Keep Your Children from Biting Their Nails

Not biting your nails can be more complex than you might think for two reasons. First, habits, when ingrained, are…

Interesting Articles
Treatments
Magnetic Therapy for Multiple Sclerosis: What Does the Evidence Say?

In recent years, researchers have seen the effects of magnetic therapy on symptoms of multiple sclerosis. Even though there's little…

Illnesses
Types of Sarcoma and Its Characteristics

There are many types of sarcoma, and so it's a rather diverse pathology that manifests in many different ways. It…

Illnesses
What Should Your Diet Include if You Have Hyperthyroidism?

What should your diet include if you're diagnosed with hyperthyroidism? The thyroid is only about 2 inches long, but a…