Bread of God is a Portuguese dessert with a flavor worthy of its name. It's very easy to make and the secret of its preparation lies in kneading it. 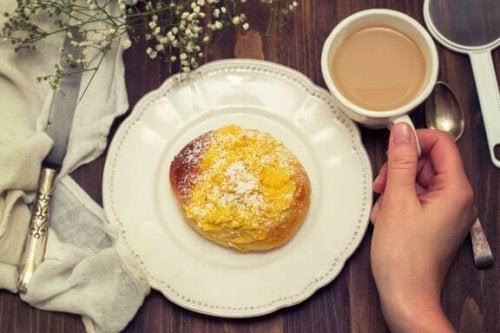 El pâo de Deus, or “the Bread of God,” is a dessert that originated from Portugal. This bun has a light consistency and a spongy texture that has some grated coconut on top, which was an ingredient that was added later on.

This bread used to be eaten on All Saints’ Day. However, now many eat it throughout the year both in its place of origin and in other countries such as Brazil and Venezuela, where they were settlements of Portuguese communities.

Many people claim that it’s more than a 200-year-old dessert. They also say that coconut was added to it after the Portuguese settled in Brazil and people begin to add new flavors and they were assimilated in their tradition. However, this still hasn’t been confirmed by historians.

What’s definitely true about this dessert is that there are several recipes that might include some lemon juice or liqueur.

How to Make an Authentic Bread of God Recipe?

Ingredients for the dough (12 servings)

Read this article, too: Coconut Oil for Improving Oral Health

Ingredients for the Topping

Check out this article, too: A Royal Dessert: Lemon Charlotte

They can be served hot or once they have cooled down. It will all depend on your own taste. However, it should be noted that in Venezuela people often eat their Bread of God with coffee or they have it stuffed with cheese from cow’s milk (one that’s low in salt).

Some people make their Bread of God with cream fillings and others with jam. Even though these options are delicious, they can turn out to be a little gooey for some people.

It’s up to you to experiment and choose what you like!

Try These Recipes for Homemade Sweet Bread
How do you make homemade sweet bread? There are many recipes and many ideas. We will share some of them with you using different ingredients. Read more »
Link copied!
Interesting Articles
Appetizers and main courses
Discover This Delicious Recipe for Steak and Onions

Interesting Articles
Illnesses
Congenital Insensitivity to Pain: What Is It?