Aging of the Immune System and How to Fight It 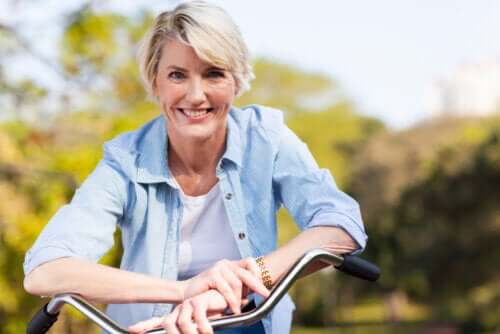 As a person gets older, the body seems to respond less effectively to the diseases it’s exposed to. Therefore, the aging of the immune system increases the risks of suffering from diseases.

In this article, we’ll explain what immune of the immune system is, why it occurs, and what its consequences are. What’s more, we’ll tell you what you can do to reverse or mitigate it.

Read on to find out more!

The immune system helps protect the body from foreign factors that can be harmful and cause disease. In this case, we’re referring to elements such as germs (bacteria, viruses, fungi, parasites), the body’s own abnormal cells, and allergens.

For these purposes, the system produces antibodies. Antibodies are those that destroy or neutralize harmful substances. Therefore, this is our defense against any threat or invasion.

However, the immune system doesn’t always remain the same. Rather, it changes throughout life. In the case of newborns, they’ve yet to acquire full immunity, for example.

Young children only have some antibodies that they have received from their mothers. They receive them during gestation, through the placenta, and also from breast milk, during lactation. However, with time and exposure to the elements mentioned above, little ones develop and perfect their defense mechanisms.

The body’s immune functions begin to decline somewhat after sexual maturity. The most important changes in this regard have to do with stem cells. The aging of the immune system also affects the availability of so-called T-cells.

What is the aging of the immune system?

The immune system becomes less effective, which results in the loss of various functions, such as the following:

Read more about this at: How the Immune System Fights Cancer

The consequences of immune aging

Changes that occur with age affect the body’s immune activity. Thus, older people are more likely to suffer from infections, develop cancer, and contract various diseases, such as flu or pneumonia.

In fact, many autoimmune diseases occur more often in the second half of adulthood. For them to develop, different control points have to fail.

Also, during old age, the body tends to heal more slowly, since there are fewer cells that make healing possible. This can become a vicious circle. Since recovery is slow, the body is exposed, so it can get sick again.

It’s important to note that old age isn’t the only thing that weakens the immune system’s response. There’s also an imbalance in its two facets: Innate immunity and adaptive immunity.

Innate immunity is the body’s first line of defense against infection. At the same time, adaptive immunity allows the body to remember and attack particular pathogens.

Due to the loss of adaptive immunity, inactive pathogens that the body had already suppressed can be reactivated. Classic examples are herpes zoster and tuberculosis.

You can also read: Weakened Immune System: What to Look For

Tips to combat the aging of the immune system

Despite the scenario we’ve described, it’s possible to reduce the risks related to the aging of the immune system to minimize its effects. It’s even possible to delay the appearance of this process.

In this sense, there are several aspects that we should pay attention to in terms of lifestyle. These are related to the fundamental quartet: Exercise, food, habits, and managing stress and emotions.

According to recent research, exercise has a significant effect on the maintenance of the immune system. From a physiological point of view, the explanation has to do with the fact that muscle tissue produces some proteins, called myocines. These reduce inflammation and help preserve the immune function.

In addition, other studies have found evidence that active individuals produce more antibodies in response to vaccination than less active individuals. Exercise is also beneficial in protecting against infections and other chronic conditions that may contribute to weakened systems.

In addition, exercise relieves stress and worry by raising the levels of happiness hormones (serotonin, dopamine, oxytocin). In this way, it helps you to stay in a good mood, which is important in recovering from illness or avoiding getting sick.

There’s no direct evidence that a healthy diet decreases the aging of the immune system. However, there ‘s plenty of evidence that shows the damage of an unhealthy diet. In other words, a high consumption of trans fats, sugars, and refined flours contributes to the appearance of diseases. And the more we get sick, the more we exhaust the body’s ability to recover.

Also, a balanced diet helps to maintain an adequate weight. In older adults, accumulated fat can have a negative effect on chronic inflammation.

This is a factor that’s associated with almost all conditions of old age, from type 2 diabetes to cardiovascular disease and cancer. Chronic inflammation also plays a role in common autoimmune conditions in older adults.

When we talk about healthy habits, in addition to the exercise mentioned above, we also have to include good sleep. Rest restores us and keeps our systems active.

At the same time, we must avoid the consumption of substances that alter our bodies: Alcohol, cigarettes, and drugs. Even excess caffeine is harmful. Of course, this extends to overwork, worries, stress, and negative emotions.

Anything that causes an imbalance and makes us sick will affect the body’s ability to recover and heal. In other words, it will affect the life span of our immune system.

Preventing aging before it comes

We shouldn’t wait until old age to prevent the risks of the aging of the immune system. Even if you’re still young or have reached early adulthood, you can start taking care of your immune system right away.

It’s not difficult, nor does it cost a lot of money. Exercise, eat healthy, don’t smoke, reduce alcohol consumption and worries, and sleep well. The benefits that appear in the long term are invaluable!

Discover How Stress Affects the Heart
Eevidence shows that emotional stress influences a wide variety of diseases. With that in mind, we'll look at how stress affects the heart. Read more »
Link copied!
Interesting Articles
Taking care of your body
Is Creatine Safe for the Kidneys?