Warts have their own irrigation and innervation. They’re contagious lesions, since they’re caused by one of the subtypes of the human papillomavirus. Do you know why warts bleed? 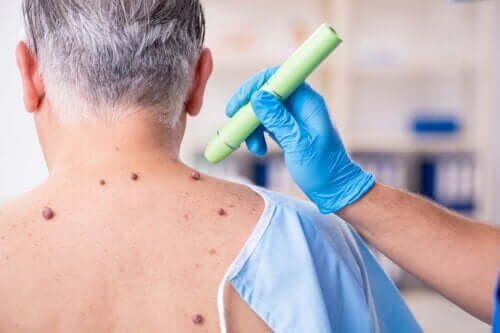 Warts are skin lesions caused by the human papillomavirus. They’re often asymptomatic and usually only tend to cause aesthetic problems. However, sometimes, warts bleed or trigger some kind of pain.

Although this is rare, experts tend to recommend seeking treatment to speed up the recovery process. Since they affect several layers of the skin, they can be difficult to remove. In addition, they’re contagious and can spread to various body parts.

Rough-textured bumps are the main symptom of warts. Beyond this, they don’t usually cause any discomfort. Only in certain cases, clinical manifestations include the following:

Read on to learn more: Plantar Warts: Characteristics and Treatment

The human papillomavirus (HPV), which has about 100 different types, causes warts. Each serotype determines the location of the lesion in the body; hands, face, neck, armpits, feet, genitals, etc. In many cases, they resolve on their own, without the need for treatment.

The virus is able to enter the skin through wounds. Once it does this, it causes extra and rapid cell growth. The outermost skin layer becomes hard and thick, thus causing the bump.

The American Academy of Dermatology affirms that it spreads through direct contact with the injury, or by sharing personal use articles, such as towels or razors.

Warts have their own blood supply. Thus, they bleed a lot if you try to eliminate them with inappropriate procedures. Specifically, they contain dermal papillae intertwined with vascular loops.

With the help of a dermatoscope, medical professionals can see tortuous capillaries that generate a red dotted pattern on macroscopy, characteristic of the lesion. Warts also have specialized nerve endings, which is why you feel pain when you handle them.

Not all warts are the same. They’re often classified according to the body part where they appear. Also, their characteristics and symptoms may vary. What are the most common?

These warts are often mistaken for calluses. They’re bigger than most warts, since the sole of the foot must support the body’s entire weight. They don’t grow exophytically but inwards, when you’re walking or standing. In addition, they’re the most complicated to treat due to their location.

They’re usually located on the face, the back of the hands, or on the cheeks. They’re hard rough growths that are scaly to the touch. As a study in The Journal of The Egyptian Public Health Association states, it’s one of the most common wart variants in children, with a 49% prevalence.

These warts are small bumps. They don’t have pigments. Instead, they have the same coloration as the surrounding skin. In addition, they’re located on the face, with prevalence on the forehead, cheeks, hands, and forearms.

Some strains of the human papillomavirus (HPV) cause warts in the genital area, including the vagina, penis, and anus. In fact, this virus is the most common sexually transmitted disease (STD).

This article may interest you: How to Prevent and Treat Warts with your Diet

Some people are more likely to develop warts. In fact, as they’re caused by viruses, it’s convenient to evaluate a person’s immune system to make sure that it isn’t compromised. The risk factors include the following:

If warts bleed, you need to intervene as soon as possible to avoid complications. In fact, even if they don’t bleed, some prefer to remove them as they’re bothered by their unsightly appearance. Here are some of the procedures that can prove helpful:

How to act if warts bleed

When warts bleed, it’s best to see a dermatologist for proper treatment. Trying to fix it at home can lead to complications and skin damage. In short, without timely intervention, it’s difficult to get rid of this highly contagious problem.

5 Solutions to Remove Warts on Your Fingers
If you need to get rid of warts, you can use conventional methods through a doctor or using natural remedies that require a little more patience. Still, they don't have any side effects and are pretty inexpensive. Read more »
Link copied!
Interesting Articles
Anatomy and physiology
Why Are Some People More Sensitive to Pain than Others?