The Causes and Treatment of Bumps on the Penis

Bumps on the penis are very common and they're present in many men. They're mostly due to common causes that don't require treatment. In today's article, we'll tell you what are the main causes and how to treat them. 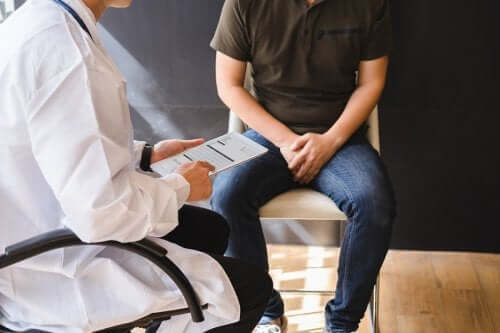 Bumps on the penis usually happen during adolescence and they’re the most common in men who have acne in other parts of their body. However, these bumps may still appear later in life. Various studies have confirmed that about eight out of ten men have or have had bumps on the penis.

What causes bumps on the penis?

First, you must know that the penis has a layer of thin, sliding skin. It’s precisely that thinness and ability to move that makes it susceptible. The top end of this integument ends in what most of us know as the foreskin, the part of the skin that covers the glans.

The glans is an area commonly affected by bumps in the penis. There are two parts to it: a vertex, where the hole to urinate and ejaculate is, and a base called the “crown” of the glans. The crown has a groove underneath that’s usually in contact with the foreskin and the frenulum. The latter is a small structure that joins the skin of the penis with the glans.

The glans have glands and papillae that are visible to the naked eye and that anyone could mistake them for bumps when they become a bit larger. These bumps are quite common, but they don’t pose a health hazard.

Next, we’re going to list the most frequent causes of bumps on the penis so you know which ones are of concern and which aren’t. Here are the eight most common causes:

Pimples are typical bumps on the penis and they’re similar to facial acne. They tend to erupt on the edges of the glans and become apparent when a man moves his foreskin. There’s a particular type known as Fordyce spots. They’re small painless white dots. These are mere sebaceous glands and don’t require treatment.

Unlike the typical protruding pimples, ulcers puncture the skin. A penile ulcer is strongly linked to genital herpes. Severe pain is a common symptom of this STD and it usually presents itself with fever. This requires immediate treatment, so consult your doctor if you have an ulcer. This is because it’s most likely a contagious infection.

Keep reading Sexually transmitted diseases – what are we talking about

3. Hair follicles that look like bumps on the penis

The hairs of the testicles and the base of the penis may look like a bump in the area where they attach to the skin. It’s common for them to worry their bearers who might rush into their doctors’ offices as said bumps often appear in large numbers. Hair follicles are normal anatomical structures wherever there’s hair on your body. They don’t require treatment of any kind and are not a health hazard. On the contrary, they’re necessary.

Blisters are sacks of fluid on the skin. They appear when there are second-degree burns or when there’s an infection, which is most likely an STD if they appear on the penis. So, people with this problem must consult their doctor and, if possible, a dermatologist too.

A cyst is a bump of considerable size that also contains liquid inside. It isn’t solid inside, nor does it have the typical configuration of a blister. In general, it’s a white liquid that may fluctuate until the bump bursts and the liquid leaks from it.

They’re not very common, but some men opt to remove them for aesthetic reasons. As you can see, they don’t pose a health risk and don’t require treatment unless they get large enough to alter the functioning of either the penis or the testicles.

You can suspect any brown bumps in the penis that retain moisture in their upper part to be genital warts, especially if they resemble a cauliflower. You must know how to recognize them because they’re often a type of human papillomavirus infection.

Warts are indicative of STDs and you must undergo treatment as soon as possible. When it comes to human papillomavirus, an infected female could be harmed a lot further than a male. This is because this virus is a precursor to cervical cancer.

Penile lichen sclerosus is a little known disease that’s often hard to diagnose. It can appear on the glans, on the foreskin, or the body of the penis. It manifests as a line of white blisters. This is a disease of autoimmune nature. This means that the body itself attacks its own structures. So, it’s not an infection and it doesn’t spread from person to person. Also, lichen sclerosus goes away within a year and it often requires medical intervention.

If the bumps become red and have a velvety texture, then a doctor should analyze them immediately, as this is suggestive of penile cancer.

8. Bumps on the penis and pearly penile papules

Twenty percent of men have this type of bumps on the penis. They manifest around the glans, specifically. Some studies identified a higher prevalence of pearly papules in four men out of ten under the age of 25. In medical terms, this papule is an angiofibroma. That is a mix of tiny blood vessels and fibrous tissue. Also, it isn’t infectious, doesn’t require treatment, and doesn’t pose a risk to a person’s health.

The Symptoms and Treatment of Hypospadias
Hypospadias is a birth defect that can cause urination, sexual, and fertility problems if it isn't corrected. Read on to learn more! Read more »
Link copied!
Interesting Articles
Illnesses
Diabetes in Children and Adolescents