What’s the Difference Between a Cyst and a Tumor?

Knowing the difference between a cyst and a tumor is important, mainly due to the general belief that a cyst is benign and a tumor is malignant. This isn’t necessarily the case, since both cysts and tumors can be malignant. 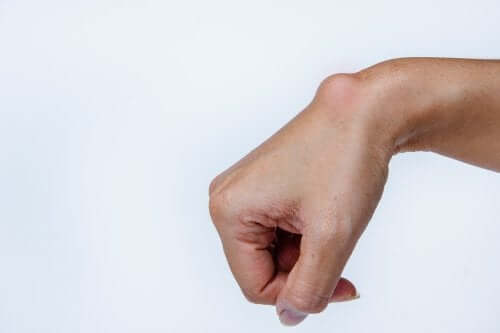 Most people can’t tell the difference between a cyst and a tumor. Both are lumps that appear in certain parts of the body and are usually of concern to the sufferer. This is because most people immediately associate them with cancer.

In fact, many people believe that the difference between a cyst and a tumor is that the former is benign and harmless, while the latter is malignant and fatal. That isn’t true. Some cysts can be dangerous, while some tumors can be benign.

An important difference between a cyst and a tumor is their cause. Also, of course, their composition and symptoms they cause. Although both tend to be very similar in appearance, the truth is that they have a different nature and consequences.

Cysts are bags or sac-like structures that contain a gaseous, liquid, or semisolid substance and are surrounded by membranes. Most of them appear spontaneously and, very often, they disappear in the same way. The usual cause is gland obstruction or infection.

There are different types of cysts. The most common are the following:

Cysts vary in size. Sometimes, they’re no bigger than a pin, while other cysts can be as big as a basketball. The bigger they are, the more dangerous, due to the potential damage they can cause to nearby organs.

Tumors are growths that arise from accelerated and uncontrolled cell division rates. These cells build up and form lumps or clumps, which become tumors, also called neoplasms.

This article may interest you: The Pan-Cancer Genomic Study: Spotting Tumors Before They Appear

Tumors can be benign, premalignant, or malignant. In other words, cancerous, precancerous or cancerous, respectively. The main types of tumors are:

The difference between a cyst and a tumor

As you can see, several factors determine the difference between a cyst and a tumor. The first one is the cause. Although cysts generally form due to a gland obstruction or infection, tumors are the result of excessive cell growth.

Likewise, while cysts generally contain air, fluid, or a semi-solid substance, tumors are solid tissue masses. Although almost all cysts are benign, cancer also causes a significant number of cysts. Cysts that contain solid material can be cancerous.

Another important difference between a cyst and a tumor is that the former tend to be moveable. In other words, you can move them from one place to another just by touching them. On the other hand, tumors are rigid masses that can’t move. In fact, they seem to be attached to the body.

Both cysts and tumors can appear anywhere in the body and require medical assessment. The danger of one or the other depends on several factors. Therefore, if you have a cyst or a tumor, you need to get the appropriate tests to get diagnosed.

A Simple Blood Test Could Locate Tumors
Thanks to changes in the DNA of dying cells, when these cells pass through the blood stream, a simple blood test can locate tumors and affected tissues. Read more »
Link copied!
Interesting Articles
Illnesses
What Causes Yellow Skin on the Bottom of the Feet