What Happens when You Swallow a Sneeze?

You're in a crowded hallway or quiet room and suddenly your nose itches... Read on to learn why it's harmful to your health when you swallow a sneeze. 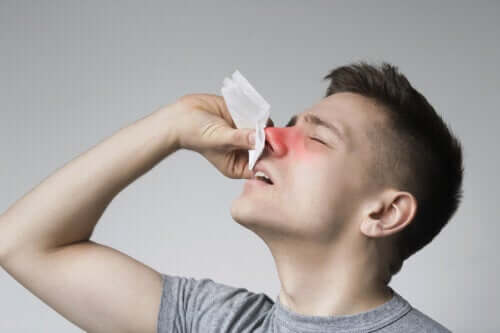 You’re in a meeting or riding the subway and you really need to sneeze, but you don’t want everyone to hear you. After all, it’s embarrassing. So what do you do? You know what we’re talking about: when you pinch your nose with your fingers and shut your mouth to keep any sound from coming out. But did you that, when you swallow a sneeze, it can be detrimental for your health?

Why do we sneeze?

Sneezing is a defense mechanism that your body (more specifically, your respiratory system) deploys to expel air from the lungs through your nose or mouth. It’s a reflexive and convulsive act that happens when something irritates your airways.

According to a study from Medical Hypotheses, sneezing causes a very fast and strong pulse of air to exit from your lungs in a short period of time. In fact, as a speed of 135 mmHg (millimeters of mercury) in just a fraction of a second. There are many different reasons why we sneeze, including:

Sneezing is a reflex action that occurs when something irritates the respiratory airways.

Another curious fact about sneezing is that when you expel that air you can’t keep your eyes open (pay attention next time and you’ll see what we mean).

This is another reflex to prevent you from damaging your eyes when the pressure in your sinuses increases, and also to keep any germs in your saliva from coming into contact with your mucus membranes and causing infection.

One of the most amazing facts about sneezes is that they almost never operate alone. What does that mean? Odds are when the first one appears, it will be followed by several more. This can vary from person to person, but when the first sneeze appears, it’s bound to repeat itself several times.

Multiple sneezes occur when not all of the air that built up in the lungs was released, or if whatever triggered your sneezing hasn’t gone away yet.

It’s also interesting to note that when we sneeze, expelling air with great force, it’s impossible to keep our eyes open. This is the result of an involuntary impulse of our body.

Is it a bad idea to swallow a sneeze?

Holding back a sneeze is a common thing we do to keep from embarrassing ourselves by walking around and spreading saliva and germs everywhere. Maybe when you were little someone told you it was rude, or you just don’t like how it feels to sneeze in public.

However, a study published in Computers in Biology and Medicine warns that the increase of pressure exerted by the respiratory tract when you swallow a sneeze can be from 5 to 24 times stronger than during a regular sneeze.

What’s more, if you swallow a sneeze, it can produce the exact opposite effect of what it’s supposed to do. To be more specific, irritating particles are directed inward, instead of outward. Plus, the force of air can harm the tissues inside your nose, causing damage to blood vessels and veins.

What’s more, pathogens and other germs can move to deeper regions of your nose, middle ear, sinuses, etc. and multiply, causing infections.

We recommend you read: How to Naturally Whiten Teeth

While it may seem harmless, when you swallow a sneeze, it puts your health at risk. In fact, it can even lead to certain types of infection.

How to Sneeze in a Healthy Way

One of the main reasons why we try to swallow a sneeze is to avoid annoying or inconveniencing the people around us.

Obviously, you don’t want to go to the opposite extreme of sneezing without any consideration or precaution… But there a middle ground between throwing caution to the wind and holding your sneezes in. How? Just cover your mouth with a tissue.

That way, the air and microorganisms can leave your body. And, at the same time, it also protects others by preventing the spread of disease and the possibility of infection.

Another widely used option (although it’s not 100% effective) is to sneeze into the corner of your elbow.

Once you’ve used your tissue and the sneezing episode is over (for now, anyway), it’s important that you wash your hands to remove any bacteria and viruses that remain.

Be sure to use hot water and soap for at least 20 seconds, particularly before eating. This helps avoid the spread of various diseases, including:

Another common practice is to sneeze into the inner part of your elbow in order to avoid the expulsion of saliva. However, there’s no proof of the effectiveness of this method.

Finally, it’s important to keep these recommendations in mind and think twice before you swallow a sneeze.

7 Natural Ways to Boost Your Immune System and Prevent Colds and the Flu
A way to boost your immune system and fight cold and flu symptoms is to use medicinal plants. Read the article for a short list of the best options. Read more »
Link copied!
Interesting Articles
Did you know?
New Year's Traditions Around the World