The Differences Between Viruses and Bacteria

It's easy to confuse viruses and bacterias. However, there are several differences between the two. Do you know what they are? We invite you to discover how these microorganisms affect us and what distinguishes them. 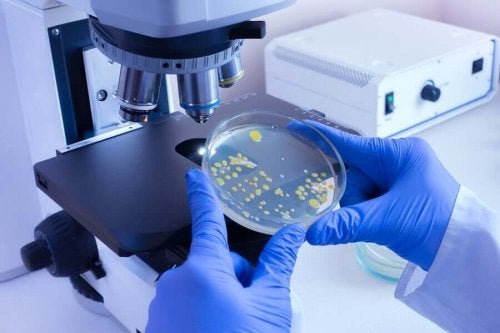 Both viruses and bacteria are microorganisms that can produce infections and harm our bodies. It’s true that sometimes it can be difficult to identify the cause behind some infections, given their similarities. However, the truth is that these two microorganisms are very different.

Now that we’re amidst a global pandemic caused by a virus (COVID-19), it’s important to understand more precisely the characteristics that differentiate viruses from bacteria. In the following paragraphs, we’ll provide the details you need to know.

General differences between viruses and bacteria

One of the main differences between viruses and bacteria is that viruses are more harmful to our health and always produce illnesses. However, that’s not exactly the case with bacteria. There are many bacteria that make up part of our bodies. This is the case, for example, with the bacteria that maintain the pH of our digestive tract (intestinal flora).

Although it’s not always that black and white. An out-of-control population of the bacteria in our bodies and some pathogenic bacteria do in fact produce illness. Also, thanks to some scientific advances, some viruses, known as bacteriophages, are being used to treat certain illnesses.

You may also want to read: Intestinal Bacteria Imbalance Leads to These 6 Problems

What are the structural differences?

Bacteria are independent microorganisms. This means that, given their complexity and reproductive abilities, they can survive on their own. But this isn’t the case with viruses. It’s not completely clear if a virus outside of a more complex cell is able to survive.

Viruses lack the necessary “organs” for metabolism. They also need a cell that functions as a host in order to be able to reproduce. Therefore, they are not functional on an individual level and they always need a more advanced organism in order to survive.

Viruses and bacteria are also different in regards to their size. Bacteria are almost 100 times larger than viruses. This means that we can see them with an optic microscope. However, in order to observe a virus, you must use an electronic microscope.

This difference in size also has to do with the complexity of each organism. Bacteria consist of a bacterial wall and a cytoplasm, with all of its organules inside. Viruses only consist of genetic material and a protein outer membrane.

You may also want to read: Medication for COVID-19 Currently in Development

How to viruses and bacteria affect us?

Apart from the bacteria that already make up part of our bodies, both bacteria and viruses make their way in. They do so through our mouth, nose, wounds on our skin, certain insect bites, etc.

Once inside our bodies, our immune system may respond efficiently and prevent any consequences. Or, on the contrary, the microorganisms can produce infections or illnesses. Viruses affect our bodies, damaging or killing cells by attaching to them and reproducing.

Bacteria, however, cause damage by consuming the resources of the cells in our bodies and producing toxic substances. These substances are known as toxins. While the infections that viruses cause tend to be systemic, bacterial infections almost always start out as localized.

The resulting pathology and symptoms will depend, first of all, on the type of virus or bacteria. But they also depend on the condition of the host’s immune system and the general characteristics of the infected person.

Discover more: Is it Coronavirus, the Flu, or Allergies?

How to treat each type of organism

Naturally, our immune systems are responsible for fighting off the infections produced by viruses and bacteria. The better our immune system works, the faster and more effectively it will control invasion. Just the same, we also have some outside “help”.

Besides antibiotics, we also have vaccines. Vaccines can work against viruses and bacteria. They consist of dead microorganisms or fragments of inactive microorganisms. Each vaccine puts our immune systems on alert for a specific pathogen in order to respond quickly and effectively.

Viruses mutate much faster and easier in order to adapt to the organisms that they want to colonize. Therefore, it’s difficult to develop a vaccine that’s lasting and effective against them. One example is the flu–each year scientists produce a new flu vaccine.

Lastly, to combat viruses we also have what are called antivirals. These act in a way that’s similar to antibiotics, but their action focuses on different parts of the virus.

Viruses and bacteria: What you need to understand

Although, on a clinical level, bacteria and viruses seem similar and produce similar symptoms, they actually have many differences. As always, if you suspect infection or have any symptoms, you’ll need to see a medical professional. A doctor will be able to make a proper diagnosis and suggest the best course of treatment.