With the worldwide expansion of coronavirus, people are starting to ask themselves how viruses change. Genomic mutation is the explanation for this phenomenon. Learn all about it in this article. 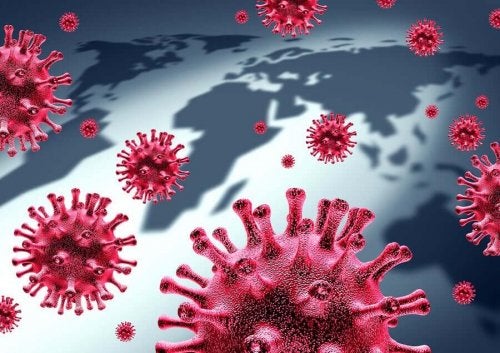 The question of how viruses change becomes popular whenever there’s an epidemic. Currently, with the expansion of coronavirus in its variant COVID-19, people are starting to ask themselves this question again.

The truth is that science has an explanation of the phenomenon. The knowledge of genetics, as well as the scientific studies that are conducted whenever there are outbreaks, have advanced the understanding of the mechanism of genetic mutation in viruses.

We know that viruses contain genetic information that they use to survive and multiply. Just like human DNA, the viral genome encodes all its information. This includes how it infects and even the hosts to be targeted.

The higher the infected population, the higher the chances that a virus will mutate. However, it isn’t correct to associate the question of how viruses change to how lethal they are. Most of them, as you’ll see in this article, mutate into milder forms to survive. If they became more lethal, they’d lose their hosts.

The answer to why viruses change is errors. Almost always, virus mutation is a consequence of an error in RNA coding. While some viruses contain DNA rather than RNA, the error is magnified in the latter.

This is because DNA viruses have a more refined mechanism for reproducing their genetic information. Thus, they make fewer mistakes when they copy the genes to replicate. In RNA viruses, the control mechanism is more rudimentary.

DNA viruses use enzymes called polymerases that are present in the cells they infect. You have to imagine a DNA virus as a parasite that takes advantage of its host’s resources. The polymerases of DNA have the ability to repair errors.

RNA viruses are different, as DNA polymerases can’t correct errors there. This leads to frequent mutations. A virus with RNA as genetic information mutates at a striking speed.

Now, if we stick to answering the question of why viruses change, we should say that they do so to survive. Just as species evolve by harnessing favorable changes to survive, viruses pretty much do the same. However, change isn’t always synonymous with increased virulence.

Keep reading: How to Avoid Catching and Spreading Coronavirus

Are changes in viruses always bad?

No. A virus mutation doesn’t always result in them becoming more lethal, or a greater ability to kill. If you think about it, it would be an evolutionary mistake. The virus can’t kill too many hosts because it would eventually die.

Viruses change adapting to the circumstances of the hosts. If they become less lethal, they may go unnoticed, replicating in one individual to another. Ultimately, this is a logical goal for viruses: perpetuating themselves.

At the same time as the virus changes, the immune response of the host also increases. This leads to a strange balance where the virus continues to survive, along with the hosts. Such is the case of the flu in humans, which causes seasonal outbreaks each year.

What was discovered regarding coronavirus and its mutation?

Peking University led a scientific study to codify the strains of COVID-19. So far, they have identified two types of coronavirus, which are named “L type” and “S type”, respectively.

The L type was more prevalent in the outbreak in Wuhan, China. This is the one that initially mutated, becoming infectious for humans, when it was first transmitted between animals. The other strain, or S, is the one found in infected humans since February.

The L type decreased its presence from January this year. Experts believe this occurred due to human actions. The measures that were taken to restrict the expansion, along with the quarantines imposed, led to the change to the S type, which happens to be a milder and less virulent version of COVID-19.

Knowing how viruses change gives clues about the evolution of epidemics. In most outbreaks, a state of maximum transmission is reached and then the cases decrease. One of the factors that lead to this is human intervention but another important one is virus mutation.

In any case, changes in viruses are incentives for us as humans to also change our habits and seek to adopt healthier measures. Prevention is the key to fighting virus mutation.

Coronavirus Disease (COVID-19) Symptoms
As you've probably heard on the news for weeks, the cases of people with symptoms of coronavirus disease continues to be on the rise worldwide. Read more »
Link copied!
Interesting Articles
Illnesses
Is it Possible to Be Allergic to Electricity?