How the Flu Affects the Body

Scientific studies have allowed experts to discover how the flu affects the body. Most people have suffered from this condition before and know it isn’t pleasant. In this article, you’ll discover where flu-like symptoms arise. 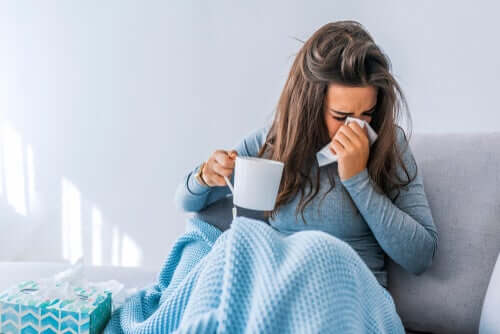 Influenza is a viral disease that’s also seasonal. Many have suffered from it before and know how the flu affects the body due to their experience with it. Certain bodily mechanisms activate against infection and are to blame for the symptoms.

Classically, the signs of flu are fever, headaches, muscle aches, and fatigue. When it evolves normally without any complications, these symptoms resolve on their own without causing lasting problems. However, some flu cases are more severe. When the virus attacks immunosuppressed bodies, due to age extremes or the presence of other underlying diseases, it may even cause death.

You must also know that the flu isn’t the same as a cold. A cold is much milder and the consequences are minor and superficial. It’s different from how the flu affects the body because the latter is much more aggressive.

The flu virus has social effects as well. Four out of ten people with flu symptoms take time off from work during the disease, and almost all of them decrease sports and social activities.

According to various surveys, among the symptoms that affect individuals, the most bothersome is the feeling of tiredness. Almost half of the people who suffer from the flu state that the lethargic period lasts for a while. While fatigue is the most noticeable and bothersome symptom, you’ll discover that it occurs due to fever and muscle aches. The culprit is tissue inflammation.

The microscopic process of the flu

The signs and symptoms that manifest externally are the expressions of how the flu affects the body at a microscopic level. Various cellular mechanisms explain the occurrence of fever, headache, and myalgia.

Once the flu virus enters the body, it has about eight hours to replicate before the human immune system detects it. Its entrance door is the airway, and it places itself in the lung’s epithelial cells. As it penetrates human cells, the virus controls cell organelles that produce proteins, and puts these organelles to work on its behalf. In short, it takes advantage of the host’s resources to multiply and survive. Subsequently, the new viral copies seek to infect other cells.

When the immune system activates to fight the flu virus, it triggers several reactions. These reactions establish the known flu symptoms and explain how the flu affects the body.

The first to activate are white blood cells. These cells constitute the first line for the subsequent activation of inflammatory mediators: cytokines. These are small hormones that carry a message in the immune system. Their mission is to cause the activation of organs and tissues to eliminate the virus from the body as soon as possible.

The immune system stops the disease but also generates the flu symptoms.

Keep reading: 7 Natural Ways to Boost Your Immune System and Prevent Colds and the Flu

How the flu affects the body: fever

Of course, we must talk about fever when it comes to explaining how the flu affects the body. The disease causes fever, which is one of its hallmarks.

Fever occurs when the hypothalamus gives the order to increase body temperature. The hypothalamus issues the order because it senses the presence of substances called pyrogens. Among the pyrogenic substances, we have the components of bacteria and viruses and cytokines.

When the body temperature increases, the white blood cells become more efficient. In fact, fever is a defense mechanism rather than a pathological consequence. In addition, at high temperatures, microorganisms have a harder time reproducing.

How the flu affects the body: headaches

It isn’t entirely clear why the flu causes headaches. However, it’s understood that a headache is logical if there’s a fever; this isn’t only characteristic of the flu.

Cytokines have also been associated with headaches. One in particular, which is called interleukin-1, is an inflammatory cytokine, just like the interferon. Both cytokines and high bodily temperature lead to vasodilation. The body vessels enlarge and that blood flow could explain the headache with an intrinsic mechanism similar to migraines.

Keep discovering in this article: The Main Differences between a Cold and the Flu

How the flu affects the body: muscle aches

Finally, myalgia, or muscle aches, are also characteristic of the flu. Scientific studies discovered a genetic explanation for this muscle pain, and the action of cytokines also explains it.

During infection, the body increases the expression of certain genes that promote the destruction of myocytes. Myocyte cells are muscle tissue cells.

At the same time, inflammatory cytokines make the muscles swell to fight the virus. Muscle inflammation is painful and exhausts the muscle, since the cells are focused on fighting the virus. Thus, that’s why flu sufferers experience exhaustion.

We know enough about the mechanisms that explain how the flu affects the body, but there’s a lot more to investigate. The truth is that, when you suffer the infection, you experience fever, headache, and muscle aches.

The symptoms express that the immune system is fighting the virus. At the same time, you must do your part to accelerate the process with proper rest and timely medical consultation.