How Many Types of Ulcers Are There?

Peptic ulcers are the most well-known. However, there are numerous types of ulcers, such as skin ulcers, which also affect a large number of people. 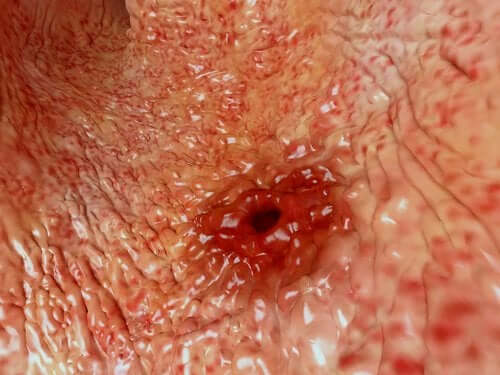 Ulcers are lesions that occur on the skin or mucous membranes and produce a loss of substance. They have very diverse causes and can be found in different parts of the body. They are also often called sores.

There are numerous types of ulcers. However, the most well-known is the peptic ulcer. It’s a very common lesion that affects the mucosa of the stomach and intestine. Its prevalence in the general population is between 5 and 10% according to estimations.

Due to the frequency of ulcers and their importance, in this article, we’ll explain the different types and what to do about them.

What types of ulcers are there?

As we’ve mentioned, this is the most well-known type of ulcer. It can affect the mucosa of the stomach (gastric ulcer) or the duodenum (duodenal ulcer). Additionally, it can even occur in the esophagus, although this is less frequent.

Peptic ulcers have to do with infections resulting from a bacterium called Helicobacter pylori. Many studies claim that half of these ulcers are related to this bacterium.

Other possible causes include long-term use of medications such as nonsteroidal anti-inflammatory drugs and aspirin. Similarly, experts associate stress, spicy foods, or coffee with these types of ulcers, as they can make the symptoms worse.

You may be interested in: How to Prevent Gastric Ulcers

These are lesions that cause the loss of some layers of the skin. They affect the epidermis and dermis mostly, although they can also affect the hypodermis, which is the deepest layer. Therefore, we can say that they’re wounds that can reach different depths in the skin.

Skin ulcers can have different causes. Most tend to occur in the elderly who are constantly lying in bed or sitting down. By staying in the same position for a long time, ulcers appear in areas where there’s pressure on the body.

These ulcers can also be due to problems in one’s circulation and tend to appear on the legs. They occur mostly in people with venous problems or who lead a very sedentary lifestyle. Furthermore, they can even be due to trauma.

There are other mechanisms that can also cause skin ulcers. For example, they also occur as a result of rubbing on the skin or exposure to high humidity.

Genital ulcers are those that appear in the area of the vulva, the penis, or the scrotum. Most are due to sexually transmitted diseases and the most common cause is a local infection by the genital herpes virus.

They can also result from a syphilis infection. In these cases, a single, painless sore usually appears. It’s very important to treat it. On the other hand, it can be chancroid. This is another bacterial infection, in which multiple ulcers appear, which do tend to hurt.

All of them may be accompanied by other symptoms such as changes in vaginal discharge or urethral discharge. In addition, they can cause fever, general malaise, or other lesions. It’s important to diagnose them to avoid their spread.

The cornea is the outer layer of the eye and acts as a kind of protective shield, protecting the eyes from dust, germs, and other risk factors. Corneal ulcers can be the result of infection or trauma. In the same way, keratitis–which is the inflammation of the cornea itself–can also cause corneal ulcers.

Many of these ulcers appear due to the use of contact lenses. Therefore, it’s important to use them properly and with good hygiene. They’re also usually related to the herpes simplex virus. As they can cause loss of vision, it’s important to establish an appropriate treatment.

A disorder called “solitary rectal ulcer syndrome” also exists. Despite its name, there’s usually more than one ulcer in the rectum. It occurs in people who have chronic constipation and blood in the feces and pain when defecating is a usual symptom.

In these cases, experts recommend a healthy lifestyle. For example, a diet rich in fiber and fluids usually helps. However, in some cases, patients may require surgery as a course of treatment.

Mouth sores–or canker sores–are usually multiple and affect any part of the mouth. They can appear as a result of fungal infections, such as candidiasis, or cancer of the mouth. They’re also related to the herpes virus.

There are many types of ulcers, as it’s a pathology that can occur in many parts of the body and for various reasons. The most important thing is to go to the doctor so that he or she can make the correct diagnosis and choose the most appropriate treatment.

8 Remedies that May Help Heal Mouth Ulcers
Mouth ulcers appear inside your mouth and cause discomfort. Everyone gets them once in a while, so it's good to know some remedies that may relieve them. Read more »
Link copied!
Interesting Articles
Illnesses
Everything You Should Know about Hypochondriasis