How to Prevent Gastric Ulcers

To prevent gastric ulcers, you have to change your habits and put recommendations for a healthy lifestyle into practice. Below, we explain the best ones. Read on to discover them! 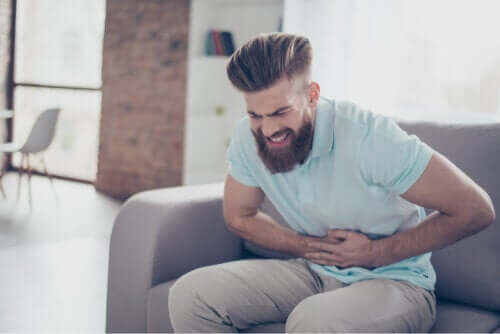 Gastroduodenal ulcers are fairly common. In fact, a high rate of recurrence is observed among patients. Therefore, being able to prevent gastric ulcers is important.

A low percentage of patients who suffer from them can manifest complications such as bleeding and perforation, which can be life-threatening. This isn’t a minor issue.

What are gastric ulcers?

Gastric ulcers are defects or sores in the inner lining of the stomach or duodenum (the portion of the small intestine that comes after the stomach). They’re also often called peptic ulcers.

They develop and grow thanks to the acid activity of gastric juices. The disease is associated with two main factors: Helicobacter pylori bacterial infections and the use of non-steroidal anti-inflammatory drugs (NSAIDs).

Most people who have a gastric ulcer won’t manifest any symptoms or only suffer dyspepsia:

Gastric ulcer complications include bleeding, penetration, perforation, and obstruction. Their prevalence has decreased in the last decades, thanks to the identification and treatment of H. pylori.

This article may interest you: 6 Foods You Should Eat if You Have Stomach Ulcers

One of the determining factors is a gastric infection by Helicobacter pylori. Between 85% and 100% of patients with gastroduodenal ulcers test positive for this bacteria in their stomach or duodenum.

Similarly, the use of non-steroidal anti-inflammatory drugs, such as aspirin, ibuprofen, indomethacin, diclofenac, piroxicam, and naproxen, along with other drugs, such as cigarettes and alcohol, is a risk factor. The risk progressively increases the longer a person uses them.

Also, experts know that there’s a family predisposition to ulcers. However, this predisposition must be combined with unhealthy habits in order to end in disease. For example, consuming certain foods and beverages that can cause stomach discomfort. Eating a healthy diet that includes lots of fruits, vegetables, and fiber can lower your risk of suffering from one.

In addition, the role of stress in the formation of ulcers is controversial. There’s some evidence that it can contribute to their development, as well as partial healing and increased recurrence.

How to prevent gastric ulcers

We decided to share some recommendations that you can follow to prevent gastric ulcers. These tips are framed in the context of healthy habits and medical therapeutic measures backed by scientific evidence:

You should also read: Herbal Remedies to Fight a Helicobacter Pylori Infection

Patients who’ve suffered from gastric ulcers will benefit from most of the prevention measures we recommended in this article. Above all, they should mainly avoid taking NSAIDs and smoking.

In addition, on many occasions, a doctor will evaluate the eradication of H. pylori. This isn’t something that the patient can decide on their own. In fact, the doctor must carry out complementary methods to corroborate the existence of the bacterium, as well as its antibiotic resistance. Once this process has been completed, they’ll establish the necessary protocol.

Although healthy habits, stress reduction, and dietary measures aren’t causal factors, they may improve symptoms or prevent the worsening of dyspepsia. In short, there are no magical ways to prevent gastric ulcers. In fact, this requires commitment and persistence in the patient and the lifestyle changes they should make.

Gastric and Duodenal Ulcers
...or wounds that appear on the lining of the stomach. When the erosions occur in the upper part of the small intestine, they're called duodenal ulcers. Read more »
Link copied!
Interesting Articles
Illnesses
The Connection Between Erectile Dysfunction and Diabetes