Transdermal patches have been in widespread use for a couple of decades now. They have great advantages over other types of drug administration, but there's a limit to the number of active ingredients that you can administer through them. 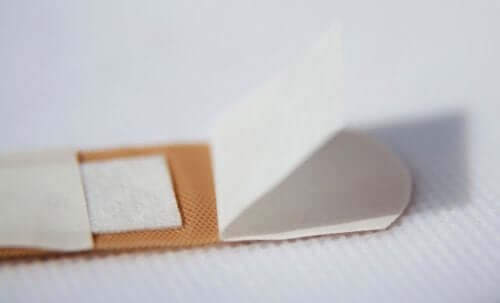 Transdermal patches have their origins in medicines that, since ancient times, people have applied through the skin. Liniments, plasters, and ointments were already used in ancient Greece, as a means of administering different medications.

In the 19th century, the idea emerged that the skin was impenetrable for certain medicines. Scientists held to this idea until the 20th century, when they proved that it was possible to administer various drugs through the skin. In time, they developed these so-called transdermal patches, and they proved to be very functional.

Transdermal patches are part of the so-called “Controlled Release Therapeutic Systems“. They’re based on a principle postulated by John Urquhart, creator of the first skin patch. According to him, the therapeutic efficacy of a substance doesn’t depend on the dose. Rather, it depends on the speed and degree of its absorption.

What are transdermal patches?

Transdermal patches are a way of administering medications. They attach to the skin with an adhesive and then release a drug continuously, ensuring that the skin absorbs it correctly. What we mean here is that it goes through the successive layers of skin, until it finally reaches the blood.

To administer a drug through the skin, it must have certain characteristics. The molecules that compose it must be lipophilic (that is, capable of being transported in lipids), and have a low molecular weight.

Likewise, they must have great pharmacological strength. This is because the body will only be able to absorb a small amount of product through the transdermal patches. At most, 10 milligrams per day.

Read also: Skin Memory: What You Should Know

Some patches differ from others, mainly in the way the drug is stored and the way it’s released. Thus, there are basically three types of transdermal patches:

Overall, the most commonly administered active ingredients in patch form are:

Also, there are several transdermal patches for cosmetic purposes. Among them, we can find body fat reducers, skin tighteners, and anti-cellulite.

Here’s another interesting article for you: Prevent Cellulite and Get Firmer Skin: 11 Habits

Other information of interest

The Food and Drug Administration (FDA) has warned us about drugs that require special caution when administered transdermally. These are mainly contraceptives, opioid analgesics, and also rivastigmine.

Overall, the main advantages of these patches are:

Overall, the main disadvantage of these patches is that they sometimes produce an allergic reaction on the skin. Likewise, when an adverse reaction appears, it takes longer to disappear. They can also be aesthetically uncomfortable and are doctors are only able to use them with a small group of drugs.

Reactive Skin: Symptoms, Causes, and Treatment
Skin reactivity manifests itself tin the form of redness, dryness, irritation, etc. So, what is reactive skin and how can you treat it? Read more »
Link copied!
Interesting Articles
Medication
Description, Characteristics and Uses of Pulmicort