The Thyroid Stimulating Hormone is responsible for regulating the production of thyroid hormones. Its imbalance manifests problems of both hypothyroidism and hyperthyroidism. 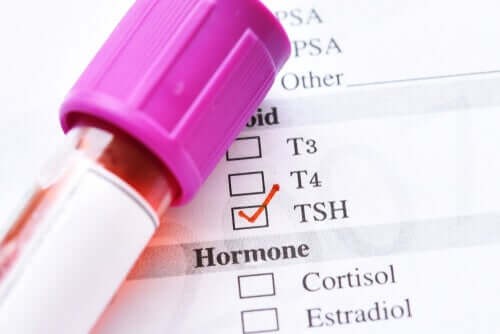 The Thyroid Stimulating Hormone (THS) is a molecule involved in possible dysfunctions of the gland. This is why doctors request the test that measures the levels of TSH in the blood when they perceive certain symptoms related to this organ.

A low TSH is indicative of an alteration that needs to be studied further. Thus, this examination is often the first of several that will follow.

TSH stands for thyroid-stimulating hormone, or, technically, thyrotropin. It’s released by the pituitary gland after the stimulus it receives from the hypothalamus through another hormone known as thyrotropin-releasing hormone (TRH).

Once there’s TSH in the blood, it contacts the cells of the thyroid gland to produce two more hormones:

T3 and T4 will go to the tissues to control the metabolism of proteins, carbohydrates, and fats. In addition, these hormones are very important in babies because they help the normal development of a newborn’s brain tissue.

Why do the levels of Thyroid Stimulating Hormone go down in the blood?

Together, these two disorders affect almost 10% of the population, and it would be possible to find an abnormal TSH result in all of these patients. The hormone in question regulates in 3 ways:

Their numbers in the blood increase when the production of thyroid hormones is high. The hypothalamus and pituitary gland both detect this rise and reduce their production of TRH and TSH. This is what we mean by negative feedback.

That is, the hormones regulate themselves in order to have stable blood levels. We would constantly go into hyperthyroidism or hypothyroidism modes without this mechanism.

TSH levels in the blood

Normal levels of TSH in the blood are between 0.4 and 4 mIU/L. There’s a thyroid dysfunction if these values ​​are higher or lower.

In particular, a low TSH means there’s so much T3 and T4 in the blood that it produces a negative feedback on the pituitary, preventing production. This is usually referred to as hyperthyroidism.

There’s also low TSH as a result of secondary hypothyroidism and it happens when there’s a dysfunction of the hypophysis gland, either because a part of it has been destroyed or something is keeping it from working properly — such as a brain tumor.

Ultimately, tertiary hypothyroidism may be the culprit. This means the hypothalamus doesn’t work and stops producing TRH. Therefore, it doesn’t send signals to the hypophysis gland to produce TSH.

In the first case, when there’s an overproduction of peripheral thyroid hormones, there’ll be high T3 and T4 levels in the blood, indicating that the metabolism is working too hard. Thus, the body will begin to burn all the fats and sugars in the body to obtain energy.

Some of the symptoms of hyperthyroidism are nervousness, palpitations, hyperactivity, and increased sweating. There’s also a hypersensitivity to heat, increased appetite, and weight loss.

Consult your doctor if you think you may have hyperthyroidism. They should be able to carry out blood tests to check your TSH, T3, and T4 levels. They’ll confirm hyperthyroidism if the Thyroid Stimulating Hormone levels are low and the thyroid hormones high.

The causes can range from a thyroid tumor to an autoimmune disease, in which the antibodies created are over-exciting the thyroid cells. There are medications to reduce and control any symptoms.

Symptoms contrary to the above, such as tiredness, weight gain, intolerance to cold, and hypothermia, are indicative of hypothyroidism. It may be that you have a brain tumor that’s either destroying the hypophysis gland or compressing it, preventing the release of TSH. It can also be due to the low production of T3 and T4 in the gland itself.

Low TSH in the context of hypothyroidism indicates a serious problem – one linked to the destruction of the hypophysis gland. Instead, if the TSH is normal or high, the thyroid gland might be the culprit.