Non-acid non-opioid analgesics are drugs that, in addition to having pain-relieving properties, have antipyretic effects. Therefore, their applications will mainly focus on these two effects. 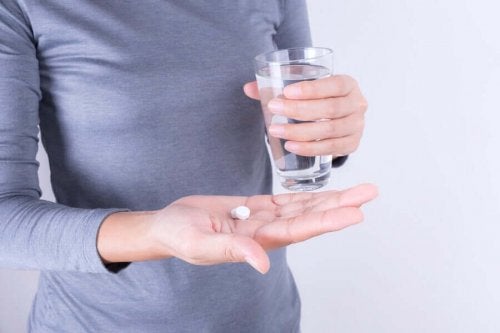 Non-opioid analgesics include various kinds of substances with different action mechanisms. Besides the typical non-steroidal anti-inflammatory drugs (NSAIDs) and COX-2 selective inhibitors, substances such as paracetamol or acetaminophen and metamizole belong to this group.

We can classify non-opioid analgesics by their chemical characteristics:

Although the mechanism of action of both groups of analgesics generally lies in prostaglandin synthesis, there are minor differences we’ll explain later.

Paracetamol is an analgesic that belongs to the chemical group of anilines. It has pain-relieving and antipyretic properties. Thus, it’s mainly used in the treatment of moderate pain and fever episodes.

This painkiller was discovered in Germany in 1877. Today, it’s the most commonly used painkiller in Europe and the United States for the indications we mentioned above. It’s available as a generic drug and under numerous brands, such as Gelocatil® or Termalgin®.

The reason why paracetamol isn’t an anti-inflammatory but is an analgesic and antipyretic, despite the fact that it acts on the cyclo-oxygenase (COX) enzyme, is that it only inhibits COX-3, which is centrally localized.

Therefore, prostaglandin synthesis inhibition doesn’t happen at the peripheral level and it can’t act as an anti-inflammatory. Prostaglandins are the molecules responsible for pain sensation. As it inhibits their synthesis, the pain threshold increases.

Furthermore, in febrile states, prostaglandin synthesis inhibition increases. As it inhibits COX-3 and, thereby, the synthesis of these molecules, paracetamol lowers body temperature and, therefore, fever.

This article may interest you: The Common Classification of Painkillers

Side effects of paracetamol

The most important side effect of this painkiller is its hepatotoxicity. This occurs when there’s an overdose of the drug and the resulting metabolites can’t be properly neutralized. Thus, they affect the liver, producing liver necrosis.

The toxic metabolite of paracetamol metabolism is called NAPQI or N-acetyl-p-benzoquinoneimine, which is neutralized with glutathione reserves.

In addition to hepatotoxicity, it can also trigger other side effects, such as:

Metamizole belongs to the chemical group of pyrazolones. Just like paracetamol, it treats fever and pain.

German experts synthesized it in 1920. Today, it’s marketed, like all other analgesics, under the generic name and numerous brands such as Nolotil®.

Moreover, metamizole is also capable of inhibiting lipopolysaccharide-induced fever. In addition, it has spasmolytic effects, which are associated with the inhibition of intracellular calcium as a result of the reduced synthesis of inositol phosphate.

Discover: Six Anti-inflammatory Foods You Must Include in Your Diet

Side effects of metamizole

Metamizole differs from other non-opioid analgesics that act on prostacyclin synthesis in the fact that it doesn’t cause any significant gastrointestinal side effects.

However, like all other drugs, it produces other side effects. The most important are the ones related to hypersensitivity reactions, such as:

In short, you should remember the importance of these drugs in controlling diseases that cause inflammatory and fever processes, representing two of the most-consumed anti-inflammatory drugs in the world.

However, like all drugs, they have significant side effects. You can prevent most of these if you don’t self-medicate and respect the treatment time indicated by your doctor. If you have any doubts about their use, consult your doctor or pharmacist.

Five Questions about Generic Drugs
Despite many myths about their effectiveness and safety, generic drugs have been proven to be just as valid as brand-name drugs. Read more »
Link copied!
Interesting Articles
Medication
Description, Characteristics and Uses of Pulmicort