The Nutritional Value of Red Fruit and Vegetables

Red fruit and vegetables encompass everything from tomatoes to radishes and are an excellent source of vitamins, minerals, and antioxidants. Today's article will tell you about 12 of them and also about their nutritional properties. 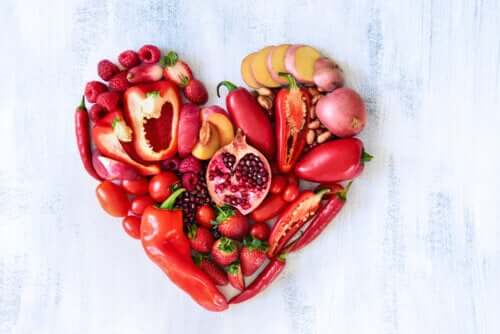 Adding color to a meal isn’t only about presentation; it’s also a real health issue. Thus, introducing red, green, white, and yellow types of fruit and vegetables into the diet is a way of providing a wide variety of nutrients to the body.

Experts have been studying this for a long time to differentiate the properties of every type of color in a given food. Today’s article will discuss red food as it’s a color that fills us with energy and vitality.

The composition and benefits of red fruit and vegetables

Natural pigments are responsible for the color of fruit and vegetables. Furthermore, science is interested in their presence in the diet, as they can have positive effects on the body. Lycopene, anthocyanins, beta-cryptoxanthin, and beta-cyanins are predominant in red produce.

Specifically, there seems to be a relationship between the consumption of carotene, found in red fruit and vegetables, and a lower risk of lung and prostate cancer. There’s much progress to be made in this regard though. However, the first studies are promising in this regard.

On the other hand, carotenoids play a fundamental role in the development of neurological health. This is because they’re present in the brain in large quantities. Their consumption can prevent the appearance of neurodegenerative diseases thanks to it and the anti-inflammatory and antioxidant action.

Apparently, carotenes also enhance visual capacity and reinforce night vision. Also, there’s a lower probability of developing problems such as macular degeneration, associated with age, in those who consume them regularly.

Twelve red fruit and vegetable options and their respective benefits

The food guides of many countries already include a variety of colors in the diet among their recommendations. Start giving a touch of strength and vitality to your dishes with any of the twelve red products listed below.

Many people think tomatoes are vegetables but they’re in fact a fruit native of South America. You can now find them all over the world in a great variety of sizes and shapes.

Their flavor is rather unique and not only does it blend well with other types of food but also contributes notable amounts of vitamin C, potassium, and lycopene. Note that tomato paste and ketchup have larger concentrations of the latter.

This is another fruit native to the American continent that’s now spread throughout the world. It’s a type of berry with a hollow interior and the edible varieties have been modified to be fleshier and softer.

There are also green and yellow bell peppers, but the red ones contain larger amounts of beta-carotene, vitamin C, B6, folates, and antioxidants.

The taproot of the Beta vulgaris plant has been consumed since prehistoric times. Betaine is the most prominent one and people have been using it as a dye for many generations.

It also has a high natural sugar content so people often use it to make sweets such as cakes and syrups. However, keep in mind that the consumption of beet juice may lead to negative side effects. This is because it would increase the concentration of nitrates that stimulate abnormal cell growth.

This one belongs to the same family as red peppers, only smaller and spicier. Don’t be fooled by its size – it’s an amazing nutritional treasure!

Chili peppers contain a large amount of vitamin C and A. Also, capsaicin, one of its characteristic components has marked analgesic activity.

There are hundreds of varieties of this vegetable. The outer layers of one of them are red due to the anthocyanins it contains.

The color of red onions sort of fades when you cook them, but this isn’t a problem because you can eat them raw. These onions are great for caramelizing and for making jams and chutneys.

6. Chicory is in the group of red fruit and vegetables

This plant belongs to the genus Cichorium, just like its endive cousins. They have a slightly bitter taste and are widely used in some recipes for pasta and risotto. Also, they’re a fantastic source of vitamin K and minerals such as copper or manganese.

This edible plant stands out for its leaves and fleshy stems. The green ones are more known and common, but some varieties contain betaine so they’re red. People have been planting more crops in the last few years.

This is the quintessential summer fruit as it’s rather light and juicy. You may not know it but it’s also a source of minerals such as manganese and potassium. It’s a great treat in any way you eat it but note that it blends particularly well in savory dishes.

The edible berries of the Vitis vinifera plant come mainly from Europe. Unlike those used in winemaking, table grapes come in bunches of large berries and are sweeter.

Research on its red pigments, along with resveratrol and other phytonutrients, suggests that they may contribute to maintaining optimal heart health and keep age-related diseases at bay.

These come from a plant that’s very easy to cultivate. Unfortunately, we can only enjoy them during certain seasons. People harvest them when they’re ripe and one must consume them within a few days as they’re rather fragile. Furthermore, this fruit is light and has a high fiber content as well as potassium and magnesium.

This is one of the most appreciated types of fruit due to its natural sweetness, although there’s also a sour variety. They all contain different antioxidants and polyphenols (beta-carotene, anthocyanins, and flavonols) that might have anti-inflammatory properties.

The Punica granatum shrub produces a red fruit with a high nutritional value. Its skin is inedible and hides the small, intensely colored seeds inside. You can juice them or add them to a large number of fresh dishes.

Tips for using red fruit and vegetables in the kitchen

One of the easiest ways to take advantage of the benefits of red pigments is to eat more fruit and vegetables of this color. There are many of them, so you can find them year-round!

Eat them fresh as a dessert or as a snack or add them to all sorts of recipes like:

The easiest way to eat vegetables and benefit from their nutrients (hydrosoluble vitamins and minerals) is by adding them to salads.

You don’t have to include all of them and the variety is such that you could have a different combination every day for a long period of time. You can combine tomatoes, roasted peppers, red onions, or beets with green, yellow, orange, and white vegetables.

Also, you don’t always have to eat them raw. In fact, it seems the action of their pigments increases when you cook them. Also, adding olive oil or some other fatty food such as avocados or nuts increases their absorption.

As you can see, stews with tomatoes, homemade tomato sauces, roasted peppers, ratatouille, beet cream, a red chard omelet, and so on are all great for your health. That’s not to mention how delicious watermelon can be when you grill it with a little bit of oil and a piece of hard cheese!

The importance of eating red fruit and vegetables

Red fruit and vegetables such as beets, peppers, tomatoes, watermelon, and cherries have many health properties and can help prevent some diseases.

Keep in mind that there isn’t one single food that can provide all of the nutrients we need. Thus, we must also include green, yellow, orange, and blue pigments in our diet.

There’s a huge variety of red fruit and vegetables and we’re aware of their positive effects. This is why we recommend any combination of five portions a day.

Be sure to include the other food groups such as proteins, whole grains, olive oil, and nuts. Remember, variety is one of the keys to a wholesome balanced diet!

The Color of Food and Its Nutritional Value
“Eat at least a dark green and an orange vegetable daily." What does the color of food have to do with its quality and nutritional value? Read more »
Link copied!
Interesting Articles
Nutrition
Nutritional Information and Health Benefits of Peas