The Keys to Happiness, According to Science

Finding moments of emotional well-being can help us better manage confinement in absolutely exceptional circumstances. Today's article will give you the keys to happiness, according to science. 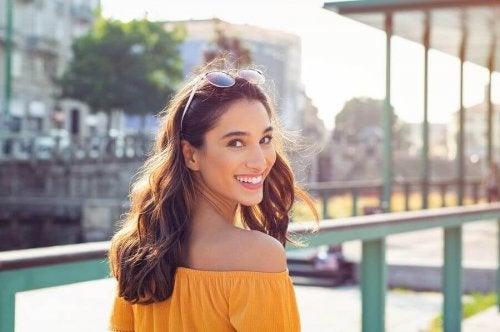 Happiness is possible, according to science. In fact, despite it being a relatively new field of study, many investigations suggest every human being can be happy, even during hard times.

It’s quite understandable to feel bad amid a pandemic, but there are many opportunities to celebrate our existence. We can always find ways to be sort of happy even during the most difficult situations in life.

What exactly is happiness?

According to science, happiness is an abstract concept. In fact, many researchers have been studying it for decades. Of course, each one came up with their own definition and there are dozens of them.

For instance, some focus on experiencing positive emotions and states, while others do so on the equivalence of happiness to the absence of fear or adversity.

Engineer Mo Gawdat proposes a rather interesting vision. He’s a former Google worker who went through a particularly difficult situation. This is because his son died while undergoing appendicitis surgery due to medical negligence. Based on his own suffering, Gawdat established a mathematical formula in which he explained human unhappiness.

According to him, we suffer because we reject the bad things that happen to us. Coincidentally, we do so because we expect them to be otherwise. For example, people who resist complying with lockdown measures suffer much more than those who simply accept being at home and make the best of it.

The same thing happens for other difficult situations in life. The pain of an event such as not accepting that our significant other left us or that we got fired or illness or death leads to excessive suffering. Thus, we undoubtedly distance from the concept of happiness – at least according to science.

Effects derived from happiness, according to science

According to Barbara Fredrickson’s Broaden-and-Build Theory of Positive Emotions (1998, 2001), experiencing positive emotions facilitates more flexible behavior. It also helps attain a broader repertoire of said types of behavior. Thus, we can better adapt to and function in our environment and the various areas of our life.

Some effects of maintaining a positive attitude are:

Read also: Being Happy Isn’t a Utopia: Reflections on Happiness

Keys to happiness, according to science

Human beings can do a lot to get away from suffering even though we live through many complicated situations throughout our lives. Below we’ll describe some proposals on how to be happier, according to science:

Countless experts being grateful for everything that’s going well in your life every day. This is particularly important when we’re going through rough times.

Furthermore, being grateful decreases your risk of developing psychological disorders such as depression, anxiety, and substance abuse (Bono and McCullough, 2006).

As you can see, incorporating gratitude into our lives during times of crisis and major difficulties can lead to a significant improvement in our emotional state.

Develop a good sense of humor

There are many psychological benefits attributed to having a good sense of humor. Among them we find:

A good sense of humor also has important physical effects such as increasing pain tolerance and improving the immune and cardiovascular systems. Furthermore, on a social level, it improves our communication with others and helps us be in harmony with our community.

Thus, it’s important to incorporate humorous moments of distraction into our lives. We may do so by rediscovering our favorite series, watching a movie that made us laugh non-stop, listening to a funny podcast, or simply reading a chapter of a book that makes us smile.

The Journal of the American Medical Association published the results of a music therapy study conducted in Austin in 1996. It revealed that music stimulation increases the release of endorphins, therefore decreasing the need for medications.

Endorphins act on our central nervous system. They motivate and energize us and so we’re happier and more optimistic.

Thus, create a playlist with your happiest favorite songs and listen to them while doing physical activity or while you’re cleaning. A daily dose of happy music makes anyone feel better!

Mindfulness means being present in the here and now. When we focus our attention on every activity we do, it becomes much easier for us to stop listening to the negative thoughts in our heads.

We don’t need to be a Zen master to practice mindfulness, though. All we have to do is focus on what we are doing. For example:

You can apply the practice of mindfulness to almost any daily activity. In fact, it’s an interesting tool to reduce anxiety, according to several studies.

The human species would’ve starved to death and become extinct without the neural mechanisms of our reward and motivation system. This is because we’re very likely to repeat anything that gives us pleasure.

Thus, we can practice many pleasant activities that’ll bring us happiness. For example, taking a hot bath when we’re cold or a refreshing shower to cool down during the summer. We also derive pleasure from learning new things and from singing, writing, painting, and dancing, among others.

Any activities that make us feel good to activate our neural circuit. They produce a sensation of pleasure and significantly reduce our stress levels. Thus, you must dedicate intentional time to any of these actions, particularly during hard times.

As Eduardo Punset commented in his book The Happiness Trip: A scientific Journey, the expectations of a highly desired situation far exceed the happiness of the event itself. That is to say, happiness is often hiding in the happiness “waiting room.”

This is due to what scientists refer to as the reward circuit. This circuit, which alerts the springs of pleasure and happiness, particularly activates during the search and not so much during the act itself. Yes, contrary to what one might expect. Dopamine activates through the mere expectation of pleasure, even if it doesn’t materialize.

So, thinking about eating our favorite ice cream, getting the job of our dreams, planning an idyllic vacation, or imagining a conversation with someone we like, will often bring us greater satisfaction than the act itself!

Happiness, according to science: Things to remember

Generating positive moods in complex situations is no easy task. However, if we stick to the actions described above, then we can get closer to a significant and lasting feeling of well-being.

However, keep in mind that most negative emotions have a function and a purpose. They wouldn’t exist if they hadn’t adapted throughout human evolution. The important thing here is to learn to listen to what they’re trying to tell you to understand, transform, and leave them behind.

As with everything, there are times when those negative emotional states don’t easily go away. This may happen even when we apply every attitude described above — and many others we already know. Sometimes the discomfort persists even when we exercise, read, or have a meaningful conversation.

Therefore, if your negative emotions are too much to handle despite your good attitude and you just don’t know how to manage such distress, then it’s a good idea to consult a specialist. There are clinical and health psychologists who specialize in these types of cases. They’ll be able to help you.

Being Happy Isn’t a Utopia: Reflections on Happiness
Is being happy possible? Is money synonymous with happiness? What leads people to happiness? In this article, Marcelo Ceberio answers these questions. Read more »
Link copied!
Interesting Articles
Healthy mind
What Are the Symptoms of Alexithymia?

Interesting Articles
Illnesses
The Symptoms and Treatment of Pyelonephritis

Miosis is the medical term used to refer to pinpoint pupils. In other words, it's about the contraction of the…

Tennis elbow is a condition that occurs when the tendons in the elbow are affected. The main cause of this…

Diet
What is the Carnivore Diet?