The Effects of Mercury in Fish

There are some varieties of fish that are contaminated with mercury and other heavy metals. This is why we should steer clear of some types of fish. Keep reading to find out which ones! 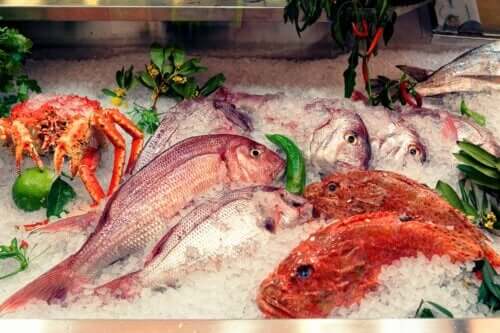 Nutrition specialists always tell us that fish is an important source of essential nutrients. However, there are some fish species that can transmit heavy metals like mercury, or foodborne diseases. Do you know about the effects of mercury, present in certain types of fish?

In this regard, the World Health Organization (WHO) points out that the main source of human exposure to toxic compounds is by eating fish and seafood. These substances particularly affect our health and, above all, represent a significant risk for pregnant women and mothers who are breastfeeding.

Why avoid some types of fish?

For years, it has been known that a wide variety of marine species, particularly those at the bottom of the food chain, can accumulate metals such as cadmium, lead and mercury that come from the mining, livestock and agricultural industries, among others. The effects of mercury in fish can be harmful to our body.

The concentrations become so high that they can be lethal. In fact, the mass poisoning that occurred in Minamata Bay, Japan, in the early 1950s is the most recognized case of poisoning from eating fish with high levels of mercury.

The effects of mercury on human health

According to a study published in the medical journal of Chile, the toxicity and effects of mercury in fish is associated with the chemical form, type, exposure dose and age at which it occurs. When this metal is released into the environment, it undergoes a series of transformations and participates in cycles between the atmosphere, the ocean and the land.

The 5% that ends up in water (including lakes, lagoons, wetlands, estuaries and oceans) is elemental mercury and accumulates in sediments. The bacteria that live there convert it to methylmercury, which worms and other animals then extract.

This is the organic substance that fish end up ingesting, and is the one that shows the greatest toxicity to living organisms, since it causes problems in the following:

However, based on the above, there are species that can live more than 100 years, so the intake of these substances throughout their lives increases their potential for toxicity.

Also, there are large fish that end up eating high amounts because their intake is higher. Keep reading as we tell you which types of fish you should avoid.

The king mackerel is a marine fish with an elongated, spindle-shaped body. It has a pointed snout and a wide mouth. It also has large eyes that are surrounded by a closed bony ring. Small scales cover its whole body, and it has a bright blue-green back, with pale green flanks and a silvery belly.

It usually measures 25 inches (65 centimeters), however, males can reach a length of up to 80 inches (2 meters). This species lives in the Atlantic Ocean from Canada and Massachusetts (United States) to Sao Paulo (Brazil).

This is a species of Marlin that can measure up to 160 inches (4 meters), although it usually measures between 70 and 120 inches (1.80 and 3 meters). It’s also known by other names, such as “blue marlin” or “Atlantic blue marlin” because of the color it has on its back. However, it has a silvery white in the belly area.

It has an elongated body and two dorsal fins. Its upper jaw is the shape of a sword. This fish usually lives in subtropical and tropical waters of the Atlantic, including the coasts of the Canary Islands.

It’s also found in the Pacific and Indian Oceans. Females weigh up to  990 pounds (450 kilograms), while males aren’t usually over 350 pounds (160 kilograms).

This sea fish inhabits the east and northwest of the Atlantic Ocean, south of the Pacific Ocean and the Indian Ocean. Its body is oval and remarkably compressed. It has a large head, small eyes and tiny teeth. Fishermen usually recognize this species because of its dark orange body and red head.

The Orange roughy inhabits depths of  600 to 5000 feet (180 to 1500 meters), and fishers catch it as an incidental species with mixed bottom trawls. The orange roughy is the longest living fish known, estimated to live up to 180 years.

The common cod, also known as “Atlantic cod” or “Norwegian cod” is one of 60 species of migratory fish. It inhabits the Northeast Atlantic Ocean from the Barents Sea to the Bay of Biscay, including the waters of Iceland, Greenland and the Baltic Sea.

It’s generally small, although some specimens reach 80 inches (2 meters) in length and weigh up to 220 pounds (100 kilograms). They feed on other fish such as herring or sardines. This species lives at a depth of 2000 feet (600 meters).

Big-eyed tuna is one of the species in which there can be considerable amounts of heavy metals. We should point out that this isn’t the case with Mediterranean tuna.

It inhabits tropical and subtropical areas of the Atlantic, Indian and Pacific Oceans, but doesn’t inhabit the Mediterranean Sea. It reaches a maximum length of 100 inches (2.50 meters), but usually reaches 70 inches (1.80 meters) at an approximate age of 15 years.

Also read: The Benefits of Bluefish

You shouldn’t consume these types of fish

Also, women of reproductive age, pregnant women, wet nurses and children under 2 years of age are more vulnerable to these toxic substances because of the negative effects of mercury on health. Of course, this doesn’t mean that other population groups are not affected.

Remember that eating moderate amounts of some of the fish described will not harm you. So, you can do it occasionally but just make sure to not make it a habit. You can enjoy the benefits of fish without risking your health!

How Can I Tell If I Have Mercury in My Body?
The problem with mercury is that many fods contain it. Therefore, you should cut back on your consumption of them to prevent poisoning. Read more »
Link copied!
Interesting Articles
Nutrition
Nutritional Information and Health Benefits of Peas