The Symptoms of Different Types of Fish Poisoning

It's impossible to notice if fish are infected from their outward appearance, taste, or smell. Also, you can't destroy the toxins, even by cooking, marinating, or freezing them. So, what are the different types of fish poisoning? 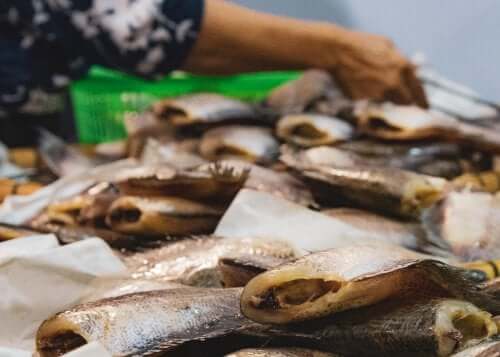 The appearance of vomiting, diarrhea, fever, abdominal pain, and body aches are symptoms that may indicate that you have consumed fish or other food with high levels of toxins. In these cases, the fish or seafood has been contaminated, either by bacteria or toxins.

So, what can you do about fish poisoning?

These conditions can threaten a person’s life if they don’t receive treatment in time, due to dehydration and electrolyte alterations. Children and the elderly are the most susceptible.

At certain times of the year, several species of fish and shellfish can contain poisonous biotoxins, which remain even if they are well-cooked. According to the Centers for Disease Control and Prevention (CDC), tourists don’t often recognize this risk, especially those who travel to the tropics and subtropics.

Fish with these toxins don’t look, smell, or taste bad. Cooking, marinating, freezing, or cooking them doesn’t destroy the toxins, and so fish poisoning is inevitable.

Let’s take a look at some of the different types of fish poisoning.

Over 400 species of fish, particularly reef fish, are believed to contain the toxin that causes ciguatera poisoning. Reef fish from the tropical and subtropical waters of the West Indies, the Pacific Ocean, and the Indian Ocean pose the greatest threat. Cases have also been reported in the United States, in Hawaii, Guam, Puerto Rico, Virgin Islands, and Florida.

What are the symptoms of ciguatera?

The symptoms of ciguatera poisoning usually appear within minutes to up to six hours after eating the toxic fish. Symptoms include a variety of gastrointestinal, neurological, and cardiovascular reactions.

Symptoms may include the following:

In more severe cases, the person can suffer from muscle pain, dizziness, and feelings of “reverse temperature” – that is, hot things seem cold and cold things seem hot. They may also experience irregular heart rhythms and low blood pressure. Symptoms usually resolve after several days, but they can last up to four weeks.

Another great article: How to Tell if Fish Has Gone Bad

Scombrotoxin, also known as scombroid poisoning or histamine poisoning, occurs after eating fish containing high levels of histamine. This is due to improper food handling.

These fish, which include dolphins, albacore tuna, yellowfin tuna, chub mackerel, sardine, anchovy, herring, marlin, amberjack, and abalone, have large amounts of histidine. As a result of inadequate preservation, the bacteria convert the histidine into histamine, thus causing intoxication.

What are the symptoms of scombroidism?

Symptoms usually appear within a few minutes of eating the infected fish, although it could take up to an hour. They usually last up to three hours but can also extend to several days. Symptoms may include the following:

The symptoms of scombroidism may also resemble other conditions or health problems. Many cases of “fish allergy” are actually scombroidism. Always talk to your doctor for a diagnosis.

Tetrodotoxin, also called blowfish or puffer fish poisoning, or fuguism, is a much rarer form of fish poisoning. However, it’s potentially very serious. In fact, it’s almost exclusively associated with eating puffer fish from the waters of the Indo-Pacific regions.

Cases of poisoning, even death, have also been reported from ingesting puffer fish from the Atlantic Ocean, the Gulf of Mexico, and the Gulf of California.

You may like to read: 6 Types of Risky Fish that You Should Never Eat

What are the symptoms of puffer fish poisoning?

Symptoms usually appear between 20 minutes to 3 hours after eating the toxic puffer fish. The following are the most common symptoms of puffer fish poisoning:

In the most severe cases, death can occur within four to six hours of the poisoning. Therefore, it’s essential to seek immediate medical assistance.

How can I prevent fish poisoning?

To prevent ciguatera poisoning, you should avoid eating the fish that usually transmit it. These include amberjack, grouper, snapper, sturgeon, mackerel, barracuda and moray eel. The poison is more concentrated in the internal organs of the fish, and so you should never eat these parts of a fish.

To prevent scombroid poisoning, don’t eat any fish that hasn’t been properly refrigerated. Be especially careful when eating fish such as tuna, sardines, mackerel, mahi-mahi, or anchovies.

Mercury in Fish: Should You be Concerned?
There are many health benefits to eating fish due to its high contribution of unsaturated fatty acids. However, there's concern about mercury in fish. Read more »
Link copied!
Interesting Articles
Illnesses
Characteristics of Henoch-Schönlein Purpura Disorder