Histamine is an endogenous substance stored in cells called mast cells. It participates in numerous physiological processes that we'll explain below. 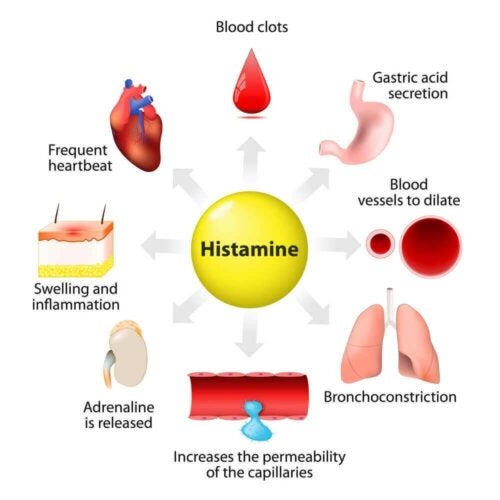 Histamine is an idazoic amine that’s involved in the local responses of the immune system. This molecule also regulates normal functions in the stomach and acts as a neurotransmitter in the central nervous system (CNS). Outside the CNS, it acts as a mediator of numerous physiological processes.

Since the 1950s, scientists have known this molecule exists in the brain, but until recently they didn’t know what it did. We’ll explain its role in the brain later in this article.

In the body, histamine is stored mainly in the mast cells of the connective tissue and in the basophilic cells of the blood. In fact, these cells are extremely secretory and constitute a system that responds to a wide variety of endogenous and exogenous stimuli through multiple cellular mechanisms.

Under normal conditions, histamine from mast cells is stored in secretory granules containing a matrix of heparin and various proteins. Along with various hydrolases, it’s connected to the matrix by ionic bonds for the most part, but a small amount may be free.

In order for histamine to be released, it must cross the granular and cell membranes. The release can be cytotoxic, after the rupture of both membranes, or exocytotic, through fusion of the membranes without cellular deterioration.

Your body releases histamine in the course of physiological processes such as gastric juice secretion. However, it’s much better known for its participation in pathological processes, in which it’s released in a more or less explosive way, as occurs in inflammatory reactions and in immediate hypersensitivity reactions.

In these cases, histamine is often one of several mediators that the body releases simultaneously.

There are multiple physical and chemical agents that cause the release of histamine. Among the physical ones are:

Regarding the chemical agents, there are an extraordinary number and variety of them and they have to find receptor molecules in the membrane with which they interact.

Depending on the type of interaction, different series of steps will be triggered which end up raising the intracellular calcium concentration. Among these stimuli we can find:

General response of histamine in the human body

When histamine is injected into general circulation, it can cause reddening of the skin, tachycardia, throbbing headache, and hypotension. These effects directly depend on the dose. This means that if you increase the administered dose of histamine, it increases the effects.

Locally, it produces edema, pruritus (itchiness), urticaria (hives), and bronchoconstriction. Additionally, histamine contributes, along with other mediators, to anaphylactic shock. On the other hand, it plays a clear role in the immune response, in inflammation, gastric secretion, and circulatory regulation, among other functions that we’ll see below.

Discover: What are Antibodies?

Functions of histamine in the body

There are many roles that histamine plays in our body. We’ll describe 5 of them below.

Histamine is a modulator of both the humoral and cellular immune responses, as well as a major mediator of hypersensitivity reactions. If applied in large doses or released during anaphylaxis, it causes an extreme decrease in blood pressure.

Additionally, histamine can act as a neuromodulator, regulating responses to other neurotransmitters. It interacts like acetylcholine, opiates, GABA, etc. Furthermore, it increases the excitability of CNS neurons, regulates hypothalamic functions, wake/sleep relationship, appetite, and vegetative functions.

It acts as a vasodilator by interacting with histamine receptors. The release of histamine leads to an increase in capillary permeability due to effects on small blood vessels from the outflow of plasma proteins and liquids from the cells.

Read: Weakened Immune System: What to Look For

Histamine causes contraction of smooth muscles. However, the response varies widely even in the same person. Small doses of the molecule also trigger bronchoconstriction in people with bronchial asthma, as we mentioned earlier.

The 9 Most Common Allergies in Kids
Most allergies usually develop in childhood. Lots of people overcome them, but others don't. Here's a list of the 9 most common allergies among children. Read more »
Link copied!
Interesting Articles
Anatomy and physiology
The Causes of Bradypnea and its Treatments