The Benefits of Applesauce

If possible, leave the peel when you cook the apple, as it's rich in pectin and favors digestion. 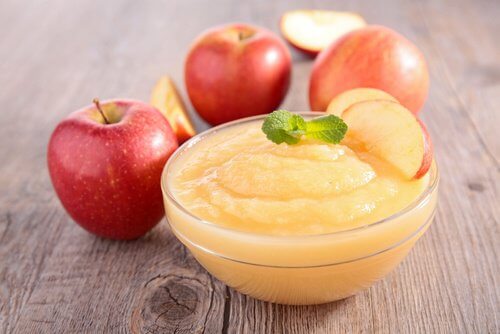 Whenever you were sick as a child, your mother or grandmother may have made you eat applesauce. It’s a common thing to give children who are suffering from digestive or intestinal problems.

Maybe this food isn’t a favorite of many people. However, it has many benefits that you should know about.

In today’s article, we’ll tell you about the benefits of applesauce and how to make it. Take note!

The uses of applesauce

Apples are among the healthiest fruits in the world, so it’s a good idea to eat them in general. In addition to enjoying one raw (with or without the peel, depending on your preference) or baked, there’s another great way to eat them: applesauce.

This typical dish for children is easy to make. The good news is that it preserves all the benefits and nutrients of apple. It’s also packed with antioxidants, flavonoids, and vitamins.

You should also read: Why Wash Your Face With Apple Cider Vinegar? Know the Benefits

Thus, it can help fight some cardiovascular diseases, according to this study conducted by Sun Yat-sen University in China.

However, don’t forget that you can never cure this type of disease, since it’s only a complement. In addition, you should consult your doctor if you think you have a major health problem.

In addition, applesauce has many other benefits, among which the following stand out:

The main properties of applesauce

Apples are among the most important sources of nutrients in nature. In addition, applesauce can have any health benefits, like the ones we mention below.

Apples are a great source of vitamin C, according to a study conducted by the University of the Bío Bío in Chile), which helps boost the immune system. In this regard, one apple a day packs 11% of what you need of this vitamin to stay healthy and strong.

You may be interested in: The Easiest Apple Tart Recipe

Also, it’s been proven that it can contribute to reducing the damage caused by free radicals, as information from the National Institutes of Health of the United States affirms, and to reduce the atrophy of certain organs and cells. These problems are usually common in the elderly.

It may help improve your digestion

Applesauce contains a lot of insoluble fiber, according to this study by Nutrition Science Solutions in the United States. Thus, you have to leave the peel on in the recipe. For this reason, it may promote good intestinal transit and healthy bowel movements.

Thus, this dish is perfect for people who are suffering from constipation. However, to maximize its effects, you should also drink a lot of water.

It can help restore your appetite

In those who are sick and recovering, it’s believed that applesauce is a good way to restore your desire to eat. In fact, it’s often given to those who can’t chew or swallow food properly.

However, no scientific evidence completely proves this information.

If you want to lose weight, on the other hand, applesauce can help you as well, as apples contain few calories (52 per 100 grams). For a lot of people, that’s enough to go a few hours without eating or the temptation to snack on something unhealthy.

When you add a tablespoon of shaved almonds or raisins, it becomes a dessert that’s packed with healthy fats, protein, and carbohydrates. And your feeling of satisfaction will also go up!

How to make applesauce

Now that you know about the amazing benefits of this dessert, it’s a good idea to learn how to make it at home. This is an easy and quick recipe!

Enjoy all the nutrients and share it with your family after lunch or dinner. Follow these steps:

Does applesauce have contraindications?

If you’re feeding applesauce to the elderly, children, or someone who’s sick and underweight, we recommend adding a tablespoon of olive oil to the sauce to maximize its anti-inflammatory benefits. According to this study from the Istituto Superiore di Sanità from Iatly, it contains a lot of them.

People who don’t tolerate fructose should avoid this dish. Instead, try using strawberries, raspberries, or pineapple instead of apple and mixing them with a little rice.

We recommend you to read: 8 Positive Health Changes When You Give up Soft Drinks

Difference between apple puree and applesauce

Before concluding this article, you may be wondering if there’s a difference between apple puree and applesauce. There is, as they’re different preparations.

On one hand, applesauce is prepared with cooked apple, while they’re raw in purees. In the latter case, it’s peeled and grated, and you can also add cinnamon, honey, or raisins.

Whatever processing you prefer, don’t hesitate to take advantage of the properties of the apple! Also, remember that you should always consult a professional if you think you may have a major health problem.

Enjoy the Benefits of Apples With These 9 Delicious Recipes
Many nutritionists recommend eating "an apple a day to keep the doctor away ".  This humble fruit hides a great quantity of benefits to our health. Discover all of the benefits of apples, by learning the 9 different ways to consume them. Read more »
Link copied!
Interesting Articles
Healthy habits
4 Benefits of Laughter According to Science

Healthy habits
Improve Your Mood with an Oxytocin Inhaler

The fundamental pillar of any social relationship is trust. On the contrary, mistrust can ruin interactions of any kind in…

Each spring, pollen allergies get dramatically worse. After a cold winter, plants and flowers come alive again and release pollen.…

The sun is the closest star to Earth and has been the subject of dreams, poetry, and many scientific studies.…