How a Second Pregnancy Differs from the First

During your second pregnancy, you won't have the opportunity to rest as much as during the first because you also have your firstborn to care for. 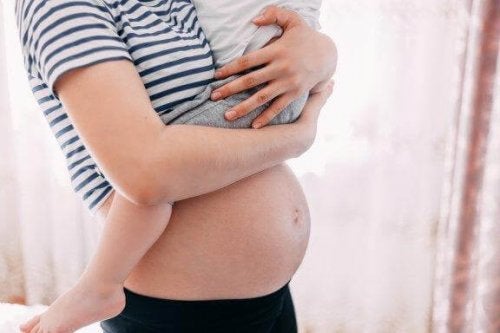 A woman’s first pregnancy is usually overwhelming. She has a lot of expectations and, believe it or not, the most intense emotion she may feel is fear. Her second pregnancy, however, may be calmer.

Since women know what to expect during this time around, they typically feel calmer. However, for others, it can be much more exciting and stressful all at once.

Although pregnant women know the events that can occur during pregnancy, every pregnancy is a new experience. Undoubtedly, a second pregnancy has a lot in common with the first, but it’s also unique in its own way.

Being Pregnant with Your Second Child

Although firstborns turn women into experienced mothers, a lot of women don’t realize that a new pregnancy can be more difficult than the first.

This new pregnancy comes with many physical and emotional changes that the soon-to-be mother has to deal with while caring for her firstborn at the same time. This is a big challenge.

This article may also interest you: Our Older Siblings: Friends and Second Parents

How a Second Pregnancy Differs from the First

The following things include some of the main differences during a second pregnancy:

Breastfeeding During Your Second Pregnancy

If you firmly believed in breastfeeding your first child until they turned two but were surprised to hear of your new pregnancy, don’t despair or rush into weaning.

Many mothers or grandmothers will tell you that you can’t breastfeed while you’re pregnant. Some doctors also believe that breastfeeding could increase changes of miscarriage. However, don’t let this alarm you.

If you have a healthy pregnancy, don’t worry. Could you feel contractions? Yes, it’s very likely, but if they occur, they will be mild ones that won’t jeopardize your health or your baby’s life. Thus, you can keep breastfeeding your first child!

Now, if you suffer from any of the following conditions, you should consult your doctor or midwife before doing so. They may advise you to wean:

Take a look at this article: The Risks of Pregnancy After Age 40

Being pregnant is one of the most enriching experiences. Your second pregnancy will be different than the first because you already have a child to care for. Thus, you need to build a healthy bond with your firstborn while you wait for the new baby’s arrival.

Make sure to try to be as calm as possible, as your child needs to feel you’re at peace. This new pregnancy may stress you out a bit more than your first. This is because although you’re happy and confident with the child that’s on the way, your firstborn may be demanding.

Just make sure to enjoy your new pregnancy to the fullest! Prepare yourself better, as you’ll have to deal with new challenges now that you’re going to the mother of two children.

Four Tips to Make Your Baby Happy During Pregnancy
Believe it or not, you can make your baby happy during pregnancy. Talking to him/her, playing, listening to music and even eating will strengthen your bond. Read more »
Link copied!
Interesting Articles
Pregnancy
Do Home Pregnancy Tests Work?